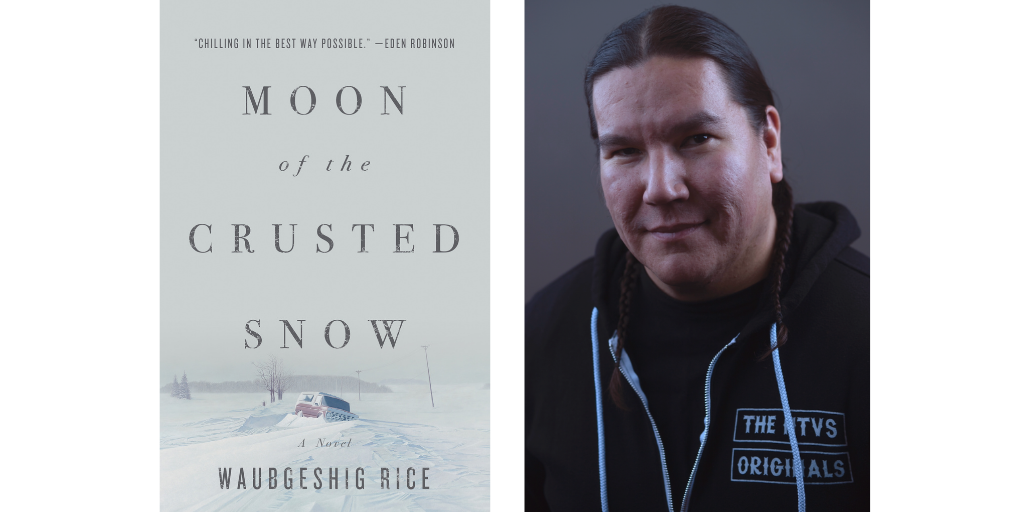 Waubgeshig Rice is a Wasauksing First Nation Canadian author. A father of two, he recently left journalism to focus on his literary career. His novel Moon Of The Crusted Snow directs our gaze to many layers of our contemporary world and the darkness the ‘moon’ illuminates.  Nonetheless, its light touches worlds that are different but the same.  Currently, Waubgeshig is putting the finishing touches to the sequel, to be published by Penguin/Random House.

Madeleine is Editor of Write On! and author of Mother Of Floods. Her mixed heritage includes Canadian First Nation, German and British.

I’ve seen Waubgeshig’s name written down. In my head, it was pronounced ‘Wobeshig’. When we meet, I’m relieved I made the decision before the start of the call to ask how it’s actually said. Names do matter, you see. They define who we are and, very often, if mispronounced or misunderstood, can erode our sense of self, albeit subtly. When he flashes up on screen, he tells me it’s pronounced Waub-ge-shig.  But that it’s fine to call him Waub, as we’ve met. Now, on firmer footing, in terms of who is here and why, we start chatting.

This interview is important to me personally. Usually, as Editor, I facilitate and discuss, but don’t take part. However, a desire to contextualise my own identity previously led me to engage with Waub, online and then through his work. So today, I’m an active part of the proceedings.

Although I was born in Germany and live in the UK, my grandfather was an Ojibwe/Anishinaabe from the Bear Island reservation in Ontario. I didn’t find this out until I was in my late twenties. My own journey has led me to believe, who we are is defined by cultural roots, as well as where we were physically raised. The idea of an innate cultural legacy, colouring our lived experience, is not new. In my debut novel, for example, I use a speculative setting to explore the inheritance of cultural and spiritual traits through the lens of my own family story.  Published by a US Canadian publisher, Mother Of Floods is an old-fashioned quest, set within a framework of myths and legends. Unlike those in Grimm fairy tales, though, it comes with up-to-date reference points, including cutting-edge technology and a sentient internet!

This idea of coupling cultural legacy with modern world needs, makes me want to engage on a number of levels. I warn Waub of this with a reference to The Simpsons. While the idea of likening Moon Of The Crusted Snow to this iconic series causes him to chuckle, he welcomes the analogy as a way of helping us do a deep dive.

The top layer is obvious: a dystopian adventure, centred around a power blackout where everything becomes useless. This is not alien to the UK; some may even remember the three-day week in the 70’s. The next layer is the ‘real’ interaction of a community trying to survive disaster in a remote part of the country. The story also makes us engage on a more instinctive, spiritual level, though. This is partly done through Nanabush, ‘The Trickster’, linked to First Nation creation stories, who Waub brings into being in his book.

However, there is a darker side also. The character called Scott is a malevolent, larger-than-life non-native. As the story progresses, we see him evolve into his arcane self, defined through the lens of First Nation myth – a Wendigo, the flesh-eating evil spirit of the forests. Waub explains that Scott/Wendigo is an allegory for ongoing settler colonialism, toxic masculinity and patriarchy. Waub goes on to say how he uses the interplay of legend and folklore to connect a more immediate social message also.

“The Wendigo stories reflect the darker nuances of our lives. They were primarily told to stop us from cannibalising each other. A Wendigo comes upon a community at its weakest.”

This strikes me as another one of those layers, the idea of everyday exploitation woven into myth: in the case of native communities in remote parts of Canada, the monopoly of the supermarket, or hydroelectricity. However, again there are universal lessons here:  the growth of the corporate, the impersonal, the exploitative and our unquestioning acceptance of this as an inevitability of modern living.

The way all these layers come together is obviously down to Waub’s creative impetus. He shares how this is formed by history; that of his people and his country. He believes that understanding colonial history is important in the context of his work, acknowledging that Canadians are slowly becoming more aware of the reality of their past; essential in terms of building positive cross-cultural relationships.  However, history for him is also intensely personal. He shares how his aunt’s murder, an event that happened before he was born, influenced his work as a journalist; in particular when covering the deaths of indigenous women. It’s certainly safe to say the past has shaped him as a writer as, he tells us, despite the passage of time, his entire family have remained deeply affected by those realities.

We move on to explore the value of language and he reveals that his efforts to increase understanding of Anishinaabemowin, previously forbidden, is a priority for him. Waub is acutely aware of the irony of writing in English but sees his inability to write as fluently in Anishinaabemowin, as part of the legacy of cultural genocide. We continue to speak about names of people and places, using oral histories to build monuments, as opposed to physical ones, ‘living physicality’, i.e. if something is named, even inanimate it is ‘alive’. It is very clear that language echoing through the generations is a very significant marker of culture for this father of two young boys.

“Everyone has the right to speak their own truth and tell their own story.”

He believes our lack of language to express the world around us is linked to the cost of environmental disconnection in our everyday lives; one of the key factors of climate change. Explaining how First Nation culture remains deeply connected to the land, he tells me he believes the world is calling for this as a way to move into a more harmonious future; with those who have retained traditional skills helping us to adapt to change. It reminds me of a word offered in another native culture I have had the privilege to touch upon through my work, in Southern Africa. The word, ‘Ubuntu’ means ‘I am, because you are’ and is part of a wider Zulu phrase ‘Umuntu ngumuntu ngabantu’, which literally means that a person is a person through other people.

Indeed, many of us fear for our planet and, with a significant number of peoples fleeing their own apocalypse in the troubled regions of our world, Waub’s layered narrative forces us to reflect on cycles of destruction happening over and over again.  Aileen, Waub’s grandmother in real life, and respected elder in his work of fiction (a fundamental truth to him is linked to the vital role indigenous women play in their communities), refers to the continuing apocalypse First Nation people have lived through, not least displacement from Lake Huron to the inarable North, children being removed to go into residential care, the felling of the forests on the mainland – the list goes on.

The universality of First Nation teachings embedded in Waub’s work strikes me again. We are living in a world where names and land have lost their value, replaced by an echoing absence. If the pandemic has shown us anything, though, it’s how fragile those systems we believe in actually are.  And that, when those things we thought would keep us safe collapse, all we have is the land and our place within it. To claim our part, we need to move away from preconceptions, have the courage to find out what things actually mean and name them.

Change is possible. Identity is reclaimable. By creating reference points for each other through stories, we define direction: for ourselves, our communities and our world as a whole. I’ll leave the last word to Waub:

“Rather than making judgements of someone’s journey in terms of place and lineage, we need to create contextual knowledge of each other as human.”

Issue 8 Write On! magazine is available now. You can find it here.

Rather than making judgements of someone’s journey in terms of place and lineage, we need to create contextual knowledge of each other as human.