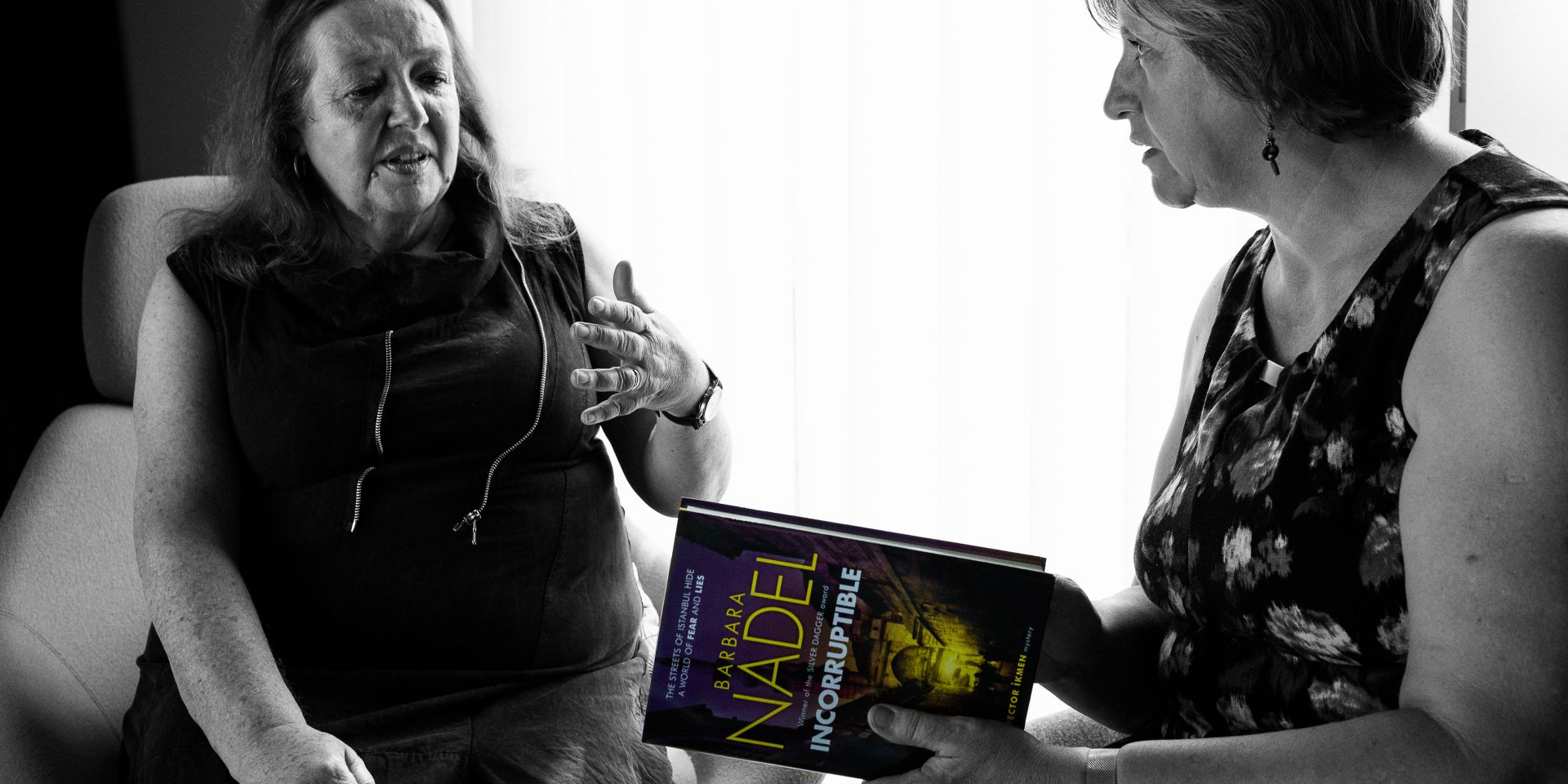 Barbara and I meet in the relaxed setting of the Writers’ Lounge. A familiar face at Pen to Print, she mentored me when I wrote my first novel, The Ogress of Reading, and has been a mentor to many other Book Challenge writers.

A book of colourful tarot card images catches her eye. She lifts it off the shelves and, recognising the style as Byzantine, tells me about her recent visit to an ancient Turkish monastery. A place where visitors are given a thread to unravel as they make their way through to its most sacred space.

I’m hoping to unravel some tales for Write On! today, so despite the temptation to start with the acute observations of the landscape and buildings of her best-selling Turkish novels, I begin with another topic close to her heart, that of mental health. I particularly want to get her take on writing as a form of self-healing:

“I think writing as therapy is excellent; it certainly helps me, and it helps other people that I know. I’m talking about writing for yourself. As a way of expressing yourself, I think it’s brilliant.

“Some people do have to deal with mental health problems, an addiction or sometimes multiple addictions. Some writers find it hard because they may be delving into something dark or unpleasant when they write about those topics.”

She smiles, “But then you do have people like Dan Brown who have excessively healthy lifestyles and are writers. We all have different needs, but it’s good to be aware of them.”

She tells me that she and fellow crime writer Simon Brett are looking at setting up some form of support for mental health within the crime writing community.

I want to know where this interest comes from. Barbara explains that, as far as she’s concerned, past experiences are key. She points out that as well as training as a teacher and actor (skills which helps with her public speaking today), she also once worked in mental health. She tells me why this has been a critical factor in directing her towards Crime, the genre for which she is best known.

“Crime fiction is a perfect world – the bad guys go to prison and the good guys win. I was working on a medium-secure unit with offenders in the early nineties and the reality is very messy. Some of them didn’t even know they’d committed a crime! Nobody really gets closure as, essentially, offenders don’t get out unless they get well. It’s very different from the criminal justice system where someone has a fixed term sentence.

“I started writing as a way of making sense of my day-to-day reality, which on many levels was deeply disturbing. I used to say, ‘I go home and write nonsense, because it needed to be far removed from my real life.’

“I was also influenced by my mum’s love of crime fiction. Books she’d borrowed from the library were always in the house.”

Barbara continually shares stories from her own family. Parents and grandparents and their different backgrounds and occupations have played a big role in Barbara’s descriptions of the diversity of the East End.

We build on the theme of diversity and I ask the inevitable, ‘Why Turkey?’:

“I went to the library looking for a book about somewhere I know really well. I thought there must be novels set in Istanbul but all they had were Eric Ambler’s The Light of Day, a spy novel from the 1950s, and lots of factual stuff. So, I thought I might as well give it a go.

“Having said that, despite beginning to write in the early 1990s, I didn’t get published until 2000. I’d send work off and people would say, ‘Turkey, you’re having a laugh!’”
With her Turkish novels selling across the world in multiple languages, I tell her I’m delighted that she has had the last laugh. I go on to ask about their distinctive main character – a hard living, outspoken detective named Ikmen and ask if he is based on anyone:

“My characters are a mixture of different people in my life, not just one. There’s a large part of my dad in him though. Dad was strong, with a good moral compass. But, like Ikmen, he was also a flawed individual. He drank, smoked and didn’t give a shit. As my mum was away a lot, he was the biggest influence on my life. I grew up seeing a lot of things from a male point of view.”

Despite this strong male perspective, recently, writing as Mary Collins, Barbara has been developing her female characters’ voices:

“The first in my series of East End sagas is Ten Bells Street. Set around the Second World War, it’s about three women and their friendship and is heavily weighted towards the female point of view.”

Our conversation turns to whether writers have a responsibility to highlight social reality in the worlds they describe. Citing her Turkish books, Barbara believes strongly that this is the case:

“For a long time, I ignored the political scene. It’s so big now though that I can’t. Since around 2016, everything in Turkey has been about politics. So many people have lost their jobs, and everybody knows somebody who’s been put in prison.

“If you care about stuff, it has to be put in the fiction you’re writing, and rising authoritarianism is something that needs to be talked about. In my latest book, some people get away with things that they shouldn’t. Maybe that’s why I’m finding it so difficult to write!”

I ask whether this links into her East End books. Here, too, she is quick to share an example, this one around skewed urban renewal:

“My Hakim and Arnold series is set in the East End and people accuse me of banging on about gentrification. The reason I do is because I believe it needs to be said. If you live in the area, especially in an old council block, you are vulnerable. If developers want your land, they’re going to get it. Even if the council offers you something else, it’s wrong!”

Before I know it, its time to draw things to a close. I can’t finish though before hearing her thoughts on dealing with rejection, something most writers have to cope with.

“That’s a difficult one. Despite my many years of practice, I’m not great at it. You just have to carry on. The key is to just give it a while. When you’ve had several rejections, take time to regroup rather than putting your stuff straight out there again. Sometimes, I’ve looked at something again and realised that it just wasn’t ready.”

Knowing how Pen to Print helped me navigate my writing journey, I ask Barbara for a few final words about the project that brought us together. Her response delights but doesn’t surprise:

“I’ve been a Pen to Print mentor for a number of years now and have really enjoyed it. There’s just so much talent out there! Having grown up in the area, I can tell you people in the East End are natural story tellers: they might be tall tales, but they’re stories.

“Pen to Print creates a bridge between storytelling and the publishing world and even as an established writer I’m always learning. The people I help give me a new perspective on things. It’s brilliant that so many people are coming forward to get involved and write. It can only really help to enrich lives.”

We might not have been in a remote Turkish monastery, but Barbara has allowed me to follow that thread of inspiration to my own place of creativity. It’s bound us as fellow members of a burgeoning community of storytellers and I can’t wait to explore the next stage of my own writing.

Look out for Barbara’s Cetin Ikmen book coming later this year called Blood Business. The new Hakim and Arnold book, titled A Time to Die will also be coming out in 2020.

Pen to Print creates a bridge between storytelling and the publishing world and even as an established writer I’m always learning.