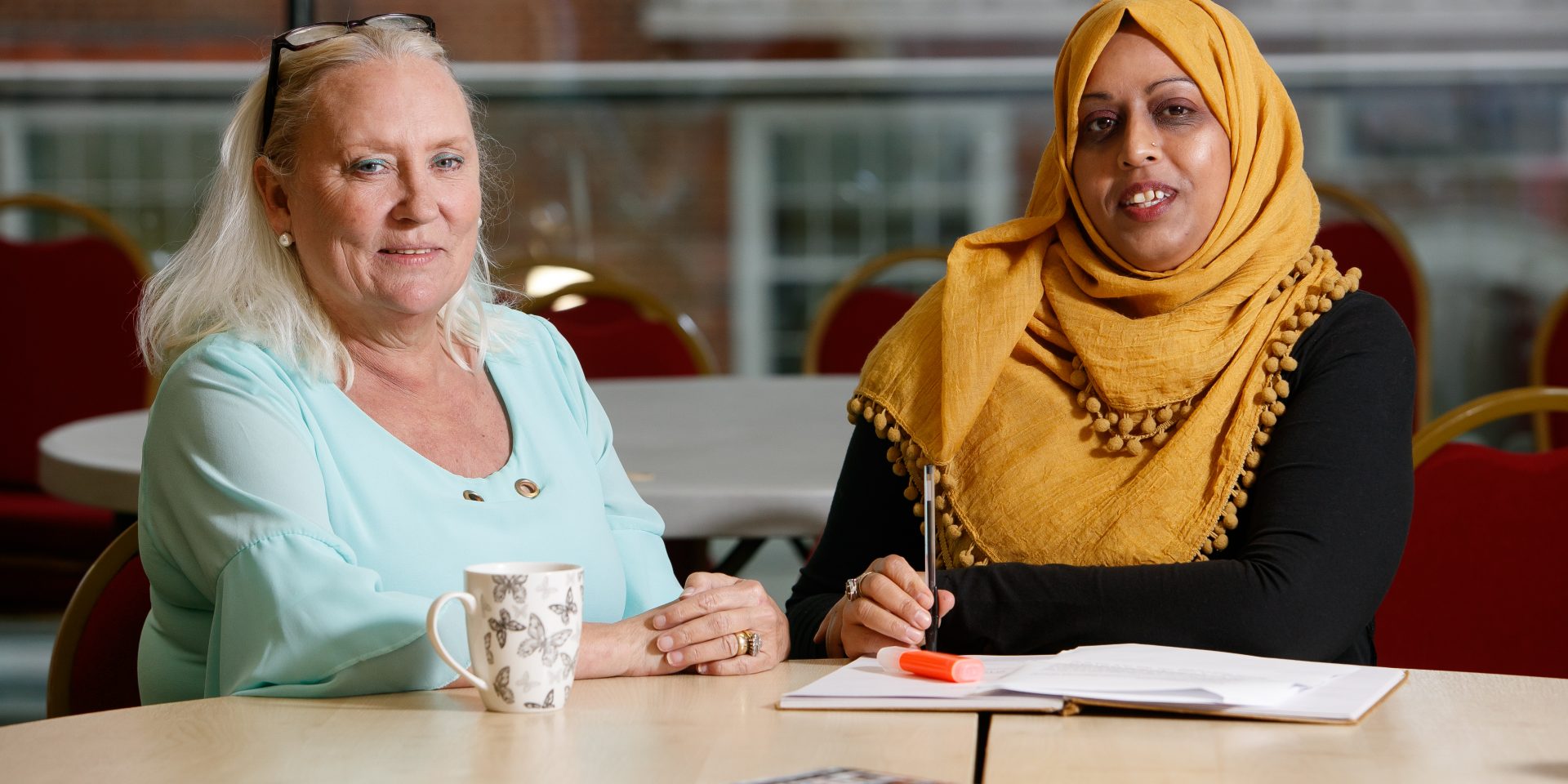 Being a local, I’ve not travelled far to get here. From the Fiddlers in Dagenham, it’s only a handful of stops on the number 5 to the Barking Learning Centre. Now I’m waiting in the conference room, chewing my pen and staring out of the windows at the rustic Town Hall. I guess I’m nervous. It’s the first time I’m interviewing a famous author and for me they don’t get much more famous than Martina Cole.

She arrives and I stand to greet her. Her arms open and she embraces me. I smile giddily. Can’t help it. She remembers me from when we last met. “Happy to see you,” she says!

We sit down and I notice Martina shivering. She needs a warm cup of tea. Although her chiffon blouse is gorgeous against her pale blonde hair and matches her green eyeliner perfectly, it doesn’t offer quite enough insulation. I dash to close the balcony doors. We need to be comfortable. It’s not every day you get to have the Queen of Crime to yourself.

Getting down to business, I explain our main theme for this issue is based on personal roots and how they impact our routes into writing. She nods enthusiastically. I’m surprised at how easily my nervousness around how she’ll perceive my prying, starts to fade. I don’t want to do ‘just another interview’, I want to have a real conversation. Her warmth is relaxing and it helps calm me.

It’s common knowledge Martina doesn’t shy away from her working-class background. Raised in Aveley, Essex, by Irish Catholic parents, she’s familiar with the perils us Barking and Dagenham residents often struggle with in terms of moving onwards and upwards, whether in our writing or life in general. I start our interview with a question around her East End roots and ask, how she reflects them in her writing:

“It is what it is,” says Martina taking a sip of her tea.

“You go to these writing conferences and you always have a guy who puts his hand up and asks, what’s fashionable these days? But, it doesn’t work like that. You write what you’re comfortable writing. Often people try to be pretentious and clever in their writing. In my experience, that never works.”

Warmed by both tea and subject matter she continues,

“Writers are like actors and actresses who make up a persona. We make up these people, we give them lives, we even put the wallpaper on the wall. There is an element of who we are in that main character. I think there’s a little bit of us in all of our books.”

I totally relate. In my debut novel, Sweethearts of Ilford Lane, although my protagonist was somewhat adolescent, my voice was authentic. She did things I saw first-hand, not in my own family perhaps, but by and large, all around me; in my culture, in my surroundings.

I respond to her point about writing from experience; wondering whether she has any links to the underworld she writes about, while asking about her infamous villains.

Martina chuckles. The huskiness of her laugh reminds me of my late grandmother, notorious in East Ham for being the only Pakistani grandma in traditional garb and a head veil, who openly smoked. She explains;

“I make sure I have enough facts to weave in to what I’m making up. It’s important to keep it real.”

She goes on to tell me it’s not about jumping on some kind of criminal bandwagon.

“Some time ago, I was doing some research at the Blind Beggar pub, when this lad in his twenties came up to me to tell me that he used to drive the Krays around. I said, ‘What? In a Tonka toy. Love, they went away 1966 and when were you born – 74, 75?’”

Martina laughs at the memory and goes on to admit how in her heyday, she’d partied with the likes of Charlie Kray and ever so, often got to see his younger brothers, the notorious Kray twins. She tells me that to ensure her research was spot on, she’d go to visit an associate of theirs, Eddie, in prison. I stare open-mouthed. This gentle lady with twinkling eyes knew actual criminals, ones I’d heard about in movies.

“Real stories get stretched over time,” continues Martina, “but, I always write an element of truth into my books so everybody assumes the rest is true too.”

I know Martina spends much of her year in Cyprus. However, nostalgia for where she was born continues to echo strongly in her writing. I assume therefore, her second home, is more about being away from the hustle and bustle of city life: a kind of retreat. With this in mind, I want to know how she keeps up with a changing backdrop? I mean the London she knew when she wrote her first book is completely different to the London of today.

“You need to visit where you’re writing so you know what you’re talking about. There’s nothing worse than reminiscing about something you knew twenty years ago and now it’s a block of flats and everybody else knows this but you, and you wrote the book. It’s important to keep au fait with what you’re writing about.”

For Martina, writing about gritty backstreets and chilling crime, comes naturally. As she talks, I recognise how the language she writes in, plays out in her daily interactions. I am inspired by the flavour of authenticity which runs through her novels – as well as in today’s conversation. Her humility touches me and, I believe, is at the heart of her continued domination of the bestseller lists. I am aware of the clock ticking though and we move on.

I’m an advocate of diversity in literature and so I ask, if she thinks her books are as diverse as the London I know and love?

She is quick to tell me all her books are diverse.

“I even wrote a book some fifteen, twenty years ago about a woman who had one white son and one black son.”

Whether good or toxic, family is a theme Martina relies on to keep her plots flowing. Within this, she tackles heavy subjects like sexual and domestic abuse, paedophilia, rape and adultery. The women she writes about vary. Sometimes they’re feeble and helpless, but equally, they can be hard and cold. I think of Martina as a magician who’s able to transform a woman’s negative journey to a positive, within, or outside the confines of the law. I share this thought, while asking her how she’s able to take her mind into these dark places.

“It’s not hard at all,” she tells me. “You’ve just got to look around you… I look back at where I grew up and at the families and women I knew.”

Martina tells me about growing up on a council estate. A place where husbands lashing out at wives was a daily occurrence. What she shares, the stuff those women put up with for the sake of keeping hold of a roof over their heads, horrifies me.

Her stories about the kids are equally sobering. Our conversation takes a sombre turn. “The screams, you never forget a battered woman’s screams.” Martina wears a faraway look, her finger tapping the, now cold, teacup.

Divorced at 17, and a single mother at 18, it’s not hard to deduce she, herself, might have seen some dark days and nights. Through her writing, she has emphasised the need to raise a voice against the outdated notion of male dominance. I’m glad her writer’s world-view has also helped define her personal life. As a reader of her books, I know I, along with millions of other women, have been inspired by this vision.

Martina speaks of her involvement with various charitable organisations for single parent families and women, like Gingerbread. She is a strong woman, but she sees this compassionate side as something which defines her also, along with ambition.

“In my books, the younger women have already decided what they want to do in their lives. This is very different from my own roots. Where I come from, we were expected to stay in our council houses, get a job in the factories, find ourselves a man, have a couple of kids and settle down.”

Her hope inspires me. The women she writes about have evolved, as society has evolved. Her new writing portrays this.

The clock mounted on the Town Hall, tells me time is up. But I’ve still got so much to ask Martina, and I know my friends at Pen to Print will never forgive me if I don’t ask her advice on the best route to get published before we say our goodbyes.

“I always say get the Writers and Artists Yearbook…” It was through this book, Martina found her agent and landed her first book deal. So it’s pretty good advice!

An hour spent in her company has made it clear how and why Martina sets such a positive example for us writers. Her toughness is something we all need to take on board, whether we are struggling with rejections or simply finding it difficult to move beyond class lines, where we live, the colour of our skins, our disabilities, our image, age, or beliefs. She truly is an inspiration and I applaud her wit and courage. She may well be the Queen of Crime Fiction, for writers like me though, she’s the Queen of Hearts.

Martina continues to smash sales records with each of her books, which have sold over thirteen million copies. Martina’s new novel, No Mercy is available from Amazon and all good bookshops now. See Martina’s website martinacole.co.uk for further details.

This interview was first published in Issue 3 of Write On! magazine.

You write what you’re comfortable writing. Often people try to be pretentious and clever in their writing. In my experience, that never works.