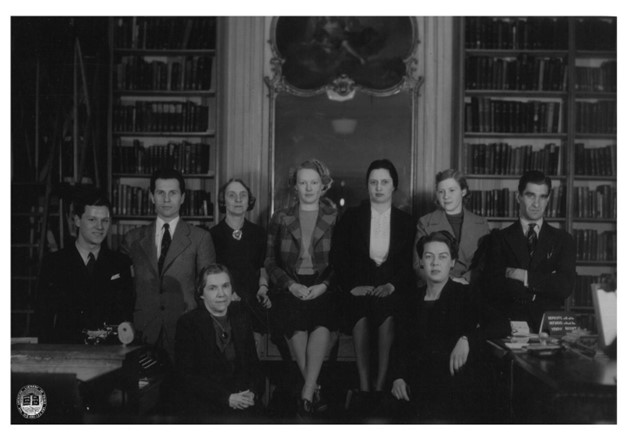 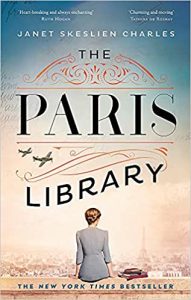 While writing the World War II book The Paris Library, I became fascinated with librarians at the American Library in Paris. At great peril, these librarians, from the director Dorothy Reeder to head librarian Boris Netchaeff, defied the Nazis in order to hand-deliver books to Jewish readers. I remain in awe of the librarians’ courage and their belief in books as bridges. In the decade I spent researching the book, I learned the fates of each member of the wartime staff except for one — a Jewish librarian.

At first, I wasn’t even sure of her name. In archives, she’s listed as Jeanette King and Jeanette Ettlinger, with various spellings of both her first and last names. I assumed that one was her maiden name, the other her married name. In the June 12, 1938, Chicago Daily Tribune article U.S. Library In Paris, Edmund Taylor wrote: Mrs. Jeannette (sic) Ettlinger… is in charge of the periodical department and got her training in Chicago’s public libraries.

In a photograph taken in the spring of 1939, Jeanette is pictured with Reeder and Canadian mother-daughter librarians Evangeline and Olivia Turnbull. A caption on the back of the print reads: At four (p.m.), women leave the library in charge of the men and slip upstairs to a small cubbyhole for tea. Fifteen minutes later they take over (and) the men finish the tea. (American Library in Paris archives)

In a 1939-40 library report, it is noted that Jeanette deserves a raise: Several posts should be regraded by the payment of at least a living wage to full-time employees, i.e. at present: Miss Reeder, Mrs. Turnbull, Mrs. Ettlinger. A penciled comment in the margin notes: She’s Mrs. King by now. This correction is the last mention of Jeanette. From this point, she disappears. There is no word about her in library correspondence or archives. No mention of her in ship manifests. No matter where I looked, the librarian remained elusive.

As the former programs manager of the American Library in Paris, also known as ALP, I felt a kinship with the librarians. We’d worked at the same place and loved many of the same books. I’d reached out to the librarians’ descendants and got to know their families. It bothered me that I couldn’t find a trace of Jeanette. I often stared at the staff photo. The more I read about the Nazi occupation, the more I was frightened for her.

In the spring of 1940, the Embassy advised its citizens to leave France. Despite the danger, the librarians remained at their posts until the Nazis were just days away from invading Paris. At this point, Reeder ordered staff members to leave and arranged for their travel to the French city of Angouleme. Once there, the Turnbulls were encouraged to return home; as Canadians and thus British citizens, they could be arrested as enemy foreigners. Such was the case for Phyllis Wedd, the ALP’s British bookkeeper, who was imprisoned in eastern France until the end of the war. Netchaeff, the Franco-Russian head librarian, was interrogated and shot by the Gestapo. You can understand why I feared for Jeanette.

Even after my book was published, I continued to search. I consulted with ALP Assistant Director Abigail Altman and researcher Mayanne Wright, who shared new leads. Jeanette Ettlinger (nee Perlin) arrived in Paris in 1931 with her husband, Harold, a journalist. According to the Americans in France Directory, Harold and Jeanette Ettlinger lived together in Paris until 1937. The 1938 edition of the directory showed a major change: Harold was now married to Sara “Sarge” Korman, but there was no listing for Jeanette, though photos place her at the library.

It turned out that Jeanette, too, remarried. In 1939, she wed British journalist Herbert E. King, Harold Ettlinger’s colleague at United Press. King’s 1981 obituary states that he was a retired CIA official and a war correspondent. He covered the German invasion of France in 1940. After the French surrender, he continued to report from Vichy. From November 1942 until March 1944, King was interned by the Nazis in Lourdes, France, and later in Baden-Baden, Germany. I wondered: Was Jeanette with him? Or had she perished?

I hoped to find a trace of Jeanette in The American Foreign Service Journal, which published the 46-page, four-month series Report of the Internment and Repatriation of the Official American Group in France detailing the experience of 145 prisoners, comprising Foreign Service personnel, journalists, Quakers, Mennonites, Red Cross staffers and their dependents. The Group, as they called themselves, was made up of 85 males and 60 females, and included 11 children. These prisoners, whom the Nazis called “Guests of the German government,” were imprisoned in a hotel. They were not allowed access to newspapers, telephones or radios and were completely isolated from the civilian population of Germany. Food rations were meagre. The entire 15 months, prisoners were offered one egg each only six times. As for alcohol and cigarettes: The supply was never equal to the demand.

At that time, Baden-Baden was on a course used by the Royal Air Force. Its goal was to hit objectives in southern Germany. As the RAF planes flew by, it sounded like hundreds of bombers were passing overhead, usually on their return flight to England, in dispersed formation and under attack from German night fighters. In the long months that the Group was imprisoned, 126 air alarms sounded in the middle of the night. Each time, the warden sounded the hotel’s dinner gong, and prisoners proceeded to air-raid shelters. At first, I worried because Jeanette was a Jewish woman in Nazi Germany. Now, I feared she would starve or be hit by a bomb. Each paragraph of the Foreign Service report revealed more dangers. I scoured the pages faster and faster, hoping Jeanette survived.

Finally, I found her. I was giddy with relief, and dumbfounded to learn that, even as a prisoner, she continued her work as a librarian. According to the Foreign Service report: Upon our arrival at Baden Baden, Mrs. J. King, a professional librarian who has spent the last five years on the staff of the American Library in Paris, undertook to organize one circulating library… The Library, which at one time contained 1,200 volumes, contributed more to the instruction, recreation and morale of the whole Group than any other single form of activity.

Though a decade-long search had ended, I couldn’t help but wonder: What happened next?

The Group members learned they were to be freed as part of a prisoner exchange between the U.S. and Germany. In February 1944, they travelled to Portugal by train. There can be no description of the joy with which the members of the Group saw the faces of their German guards receding in the distance, a prisoner writes in the Foreign Service report. On March 7, the entire Group boarded the M.S. Gripsholm.

Upon arrival in New York, Jeanette and her husband divorced. I suspect King married her to give her the protection of his name. She returned to her native Illinois, where she wed for a third time in 1964. Her marriage to Nickolas Anthony Becker lasted more than 30 years. A recent conversation with Jeanette’s stepchildren revealed that she was “always scared” during the occupation and in Baden-Baden, but that she was “really protected.” Everyone “helped her by hiding the fact that she was Jewish.”

Stateside, books continued to be her passion and she read aloud to the blind. Jeanette died in 1997, at the age of 89. Her love of books and sharing the written word lasted her entire life.

Janet Skeslien Charles is the award-winning author of Moonlight In Odessa and The Paris Library. Her shorter work has appeared in revues such as Slice and Montana Noir. She learned about the history of the American Library in Paris while working there as the programs manager. She divides her time between Montana and Paris.

I remain in awe of the librarians’ courage and their belief in books as bridges.