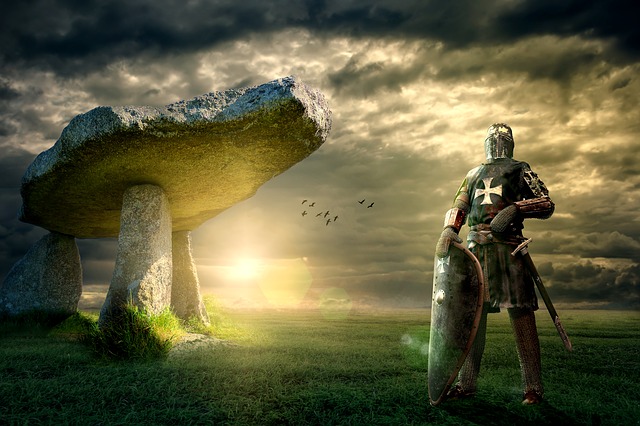 The ‘Myth Legend & Lore Podcast’ is a place where we can journey into the past and share tales of mythology, legends and folklore that have captured our imaginations and fired our curiosity! She tells us about the year ahead, which is filled with exciting new projects and collaborations. These include her second novel, and the continuation of  Víðförul – The Women Pioneers Of The Vinland Sagas, which she co-writes and produces with Dr Jóhanna Katrín Friðriksdóttir.

WO: How would you describe ‘The Myth Legend & Lore Podcast’ to someone new to it?

SC: The podcast is an exploration of mythologies, legends and folklore from cultures around the world. I’ve found that most of my time and research is concentrated on Celtic, Irish, Old Norse & Icelandic sagas, myths and tales. This is because I grew up with a lot of these stories and they are like old friends! One of my favourite episodes was on Lafcadio Hearn and his fantastic book Kwaidan. Tuttle Publishing was wonderful and let me share some of the stories from the collection The Tale Of Mimi-Nashi Hoichi And Yuki-Onna, which are marvellous. The film adaption made in the 1960s is stunning! My aunt is from Tokyo and introduced me to the work of Lafcadio Hearn as well as The Tale Of Genji, another remarkable novel and certainly worth an episode or two of the podcast! I’ve had delightful guests on the show, including musicians and authors, and it has been such a privilege to share their work. I think storytelling is a vitally important tradition, with the understanding that, over time, the way in which we communicate those fragments of the past and present, changes. The spark of creativity that captures our imaginations and fires our curiosity can be nurtured into a flame that burns brightly for generations to come.

WO: Can you tell us about your latest episode?

SC: A recent episode featured an interview with Professor Carolyne Larrington and her book All Men Must Die. It was a wonderful discussion about the series Game Of Thrones and the story-arcs of some key characters. Following that, we have a narration of The Thattr Of Nornagest; a legendary tale found in an Icelandic medieval manuscript called the Flateyjarbók. The story concerns a man who reveals his name is Guest when he arrives at the court of King Olaf Tryggvason. Guest soon displays a talent for storytelling and describes incredible accounts of his life, spanning hundreds of years. Those who love The Saga Of The Völsungs will enjoy Guest’s descriptions of life, riding with Sigurth, Brynhild’s ride to Hel and his encounter with the Norns, which reveals the very cause of his longevity. It has many of the themes we might expect to find in sagas or thattr’s: loyalty, honour, friendship, but is also an interesting depiction of life in a northern court during the Viking era.

WO: What inspired you to set up ‘The Myth Legend & Lore Podcast’?

AN: As a writer and narrator, I found myself working with stories I really wanted to share with a wider audience. Both my husband and I are fans of podcasts, but I wasn’t sure if the ideas I had might be of interest to anyone else but me! He suggested I try it out, so I wrote a few very short episodes. I wanted to create a podcast that allowed the audience and me to explore different mythologies, legends and folklore of cultures from around the world. What I discovered was an incredible amount of support from fellow podcasters and listeners. It has been such a journey and I’ve met wonderful people. Now I really can’t imagine this part of my life without the podcast.

WO: The current issue of Write On! explores the theme of ‘Growth’ and how we navigate Spring as the season of change. With that in mind, do changes in the natural world motivate or affect your work?

AN: Yes, in a number of ways. The natural world is profoundly linked to mythology and folklore. As the world around us changes, so do the stories we tell, the festivals we celebrate and the occasions we mark. Once, nature guided our lives by the seasons: we prepared for planting, harvesting, the dark cold days of winter and the first buds of spring. There is a paragraph concerning the worship of water in James Mackinlay’s Folklore Of Scottish Lochs & Springs that has remained with me long after reading:

They (our ancestors) had very vague notions regarding the difference between what we now call ‘the Natural’ and ‘the Supernatural’. Indeed, to them, all nature was supernatural! They looked on sun, moon and star, on mountain and forest, on river, lake and sea as the abodes of divinities, or even as divinities themselves. These divinities, they thought, could either help or hurt man, and ought, therefore, to be propitiated. Hence the customs, some of which have survived to the present day. Men knocked at the gate of nature, but were not admitted within. From the unknown recesses, there came to them only tones of mystery.

I’ve found the natural world to be one of the most important sources of inspiration. As the world around us changes, so do the tales we tell. The Greek philosopher, Heraclitus of Ephesus, is believed to have written Change is the only constant in life, and themes such as transformation and rebirth are often found in mythology, legends and folklore. Our lives are ever pushing forwards, and it doesn’t hurt to have a tale or two reminding us that growth has long inspired us and left a lasting impression on our psyche.

WO: What one piece of advice would you give an aspiring podcaster?

SC: Plan ahead! It can be hard juggling commitments with interests and passions. I learned a lot during the first year of the podcast: how to improve audio, episode/scriptwriting and editing. As the show grew, so did the pressure I put on myself to try and accomplish everything, which was impossible! A happy balance is something I still struggle with. Make sure to look after yourself; everything takes time and podcasting is a demanding but hugely rewarding venture. If you decide to go for it, one of the first things you’ll find is the overwhelming support of the podcasting community and such a rewarding connection with listeners.

WO: Can you tell us anything about future episodes?

SC: Certainly, we have so much happening this year! As well as interviews, we will continue with our Women Pioneers Of The Vinland Sagas series, narrations of legendary tales and sagas, and the exploration of figures from mythology, legends and folklore from around the world.

WO: Lastly, just for fun, if you could choose one fictional animal/creature to be a pet or companion, who would it be and why?

SC: Since I was very young, I’ve been fascinated with folktales surrounding Selkies. I grew up close to the sea and stories about these incredibly beautiful yet tragic creatures always caught my imagination. As a child, I would watch seals swimming or lying on the rocks and wonder whether they were enchanted. Could they shed their skins and walk on land, were they fallen angels, a king’s children bewitched by a spell, women who had regained their pelts and joined their own kind once more? Perhaps it had something to do with their eyes: there is depth and so much spirit in them and the graceful glide of their bodies in the water. There is a haunting ballad, The Silkie Of Sule Skerrie, which tells the story of a woman who has a child to a selkie. In his human form, he makes a devastating prediction about the life and death of their son. In many tales concerning selkies, they tend to suffer at the hands of humans. This story has that thread and others, which makes it so interesting. So, if I were lucky enough to be given the chance, I would choose transformation; to swim with creatures in another world – one that has its own kind of magic we are unable to experience on our own.

You can find out more about ‘The Myth Legend & Lore Podcast’ here: mythlegendlore.podbean.com and/or connect with them on Twitter: @LoreMyth

A happy balance is something I still struggle with. Make sure to look after yourself; everything takes time and podcasting is a demanding but hugely rewarding venture.