For our latest ‘As A Writer’ interview – L.M. Towton ask fantasy author, R.J. Barker about himself and his writing.

We have met RJ a few times at, writing convention, Edge-Lit in Derby. Mostly this has been through attending his extremely entertaining and interactive workshops – complete with props and chaos, but the fun kind. We are delighted to have him answer questions for Write On!. 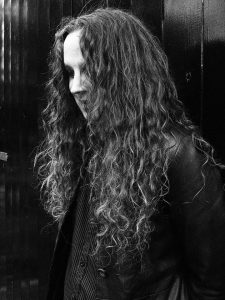 RJ Barker lives in Leeds with his wife, son and a collection of questionable taxidermy, odd art, scary music and more books than they have room for. He grew up reading whatever he could get his hands on, and has always been ‘that one with the book in his pocket’. Having played in a rock band before deciding he was a rubbish musician, RJ returned to his first love, fiction, to find he is rather better at that. As well as his debut epic fantasy novel, Age of Assassins – the first in his Wounded Kingdom Trilogy – RJ has written short stories and historical scripts which have been performed across the country. He has the sort of flowing locks any cavalier would be proud of.

LM: How would you describe your writing/work to someone new to it?

RJ: Oh, this is a really hard question as I think the artist is always the worst person to describe the art. I suppose my work is primarily about people, cos I love people and that’s what interests me. I don’t really consider myself as a fantasy writer as much as a writer who’s doing fantasy cos genre doesn’t really matter to me, that’s just clothes for stories about people. Not that I don’t love making stuff up, there’s a huge amount of freedom in being able to create a world that you don’t have with say, crime or historical fiction. I’m quite a ‘voicy’ writer, I like that description, the way I write is almost a character in the book and it’s definitely meant to inform the narrative.

LM: Can you tell us a bit about your latest book The Bone Ships?

RJ: Yes! It’s a love letter to the literature of the sea, C.S. Forester, Patrick O’Brian and Herman Melville, and it’s full of action and adventure and HUGE DRAGONS. I sort of jokingly describe it as Hornblower vs Godzilla, which I think gives a flavour of it. But I get to create a world from the ground up; so we have matriarchal societies and bird creatures that can control the wind and all manner of terrible things that live in the sea. And then there’s ideas about class and the environment and the way we treat people in there too but I think they appear in everything I do. It’s something new for a reader to discover, and it’s been quite exciting for me to see how many reviews have mentioned that there isn’t really anything like it.

LM: What inspired you to write in the first place, and what inspires you now?

RJ: Books, really. I’ve always been a reader and always found escape in books. As well as that I’ve always wanted to do something creative. At first it was music, cos I wanted to be on stage and I did a lot of drama when I was younger but books and words were my first love and when I finally realised I was never going to be anything more than passable-at-best as a musician I had a rethink and went back to writing.

And I love it. Books are endlessly inventive, just a few weeks ago I read Only Forward by Micheal Marshall Smith and it filled me with wonder and joy. I want to share that joy, and if I can make one person feel as thrilled as I have done when reading then it’s a good thing. In the same way, if someone who doesn’t usually find themselves mentioned in media can find someone like them in my books, then that’s even better.

LM: The current issue of Write On! explores the theme of “Roots on Routes”, can you tell us a bit about your background as a writer and how you got published?

RJ: I’ve always read. I was always the one with a book with them but I concentrated on music for a long time, even though I wasn’t actually very good at it. When I, eventually, realised I was never going to be good enough I turned back to what I loved originally, which was books. But, as I hadn’t really been paying much attention at school, I had to learn English all over again. Then I got really ill and forgot everything and had to learn it all over again, again. And I found out that reading about ‘how to write’ was the worst thing for me, so I’ve just kind of stumbled along finding my way and that seems to have worked out, so far. And maybe that’s part of why people talk about my work having a definite ‘voice’. I’ve had kind of an odd life where things happen in surprising ways and even the process of getting an agent wasn’t the normal ‘submit, wait, submit again’. I kind of fell in with an agent through a series of odd coincidences. Though I’m with a different one now, again, in a way that was pretty non-traditional.

LM: What one piece of advice would you give an aspiring writer?

LM: Question from Twitter user: @FlippanceJ – “I’m always curious about what published authors know now that they wish they’d known when they were just starting to try to get published?”

RJ: I’m not a great fan of the idea of going back and changing things, because our errors and mistakes make us what we are. And, to be really honest, I am terribly stubborn and it’s very unlikely I would have listened to myself because I am going to do what I am going to do no matter what even if me from the future turns up. Things have worked out ok for me, best not to mess with it.

LM: Can you tell us anything about future projects?

RJ: Well, I’m a fair way off a new fantasy project, just messing about with ideas and it’s all too nebulous to really be anything I can tell people about. I’m hoping it’ll end up being something a bit less dark. I also hope, one day, to write and publish a crime novel, as it’s a genre that’s really close to my heart.

LM: Lastly, if you could choose one fictional animal/creature to be a pet or companion, who would it be and why?

RJ: I’d quite like a Deamon (from His Dark Materials) of my own. I like to imagine it would be something cool like a crow but it would probably be a dormouse. Not that dormice aren’t cool but I do feel a crow on my shoulder would fit my image a bit more. 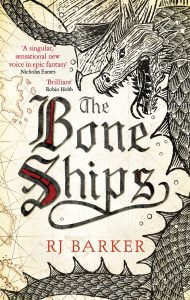 You can find out more about RJ and his books on his website: rjbarker.com and connect with him on Twitter @dedbutdrmng.

‘The Bone Ships’ is out now and available to buy here.

Look out for more Write On! interviews every Sunday.

L.M. Towton is the pseudonym of Science Fiction/Fantasy (SFF) writing partnership Lauren Towers and Michelle Sutton. They are currently editing their first novel The Soul Caller.

(Bio and picture taken from ww.rjbarker.com)

I’m quite a ‘voicy’ writer, I like that description, the way I write is almost a character in the book and it’s definitely meant to inform the narrative.