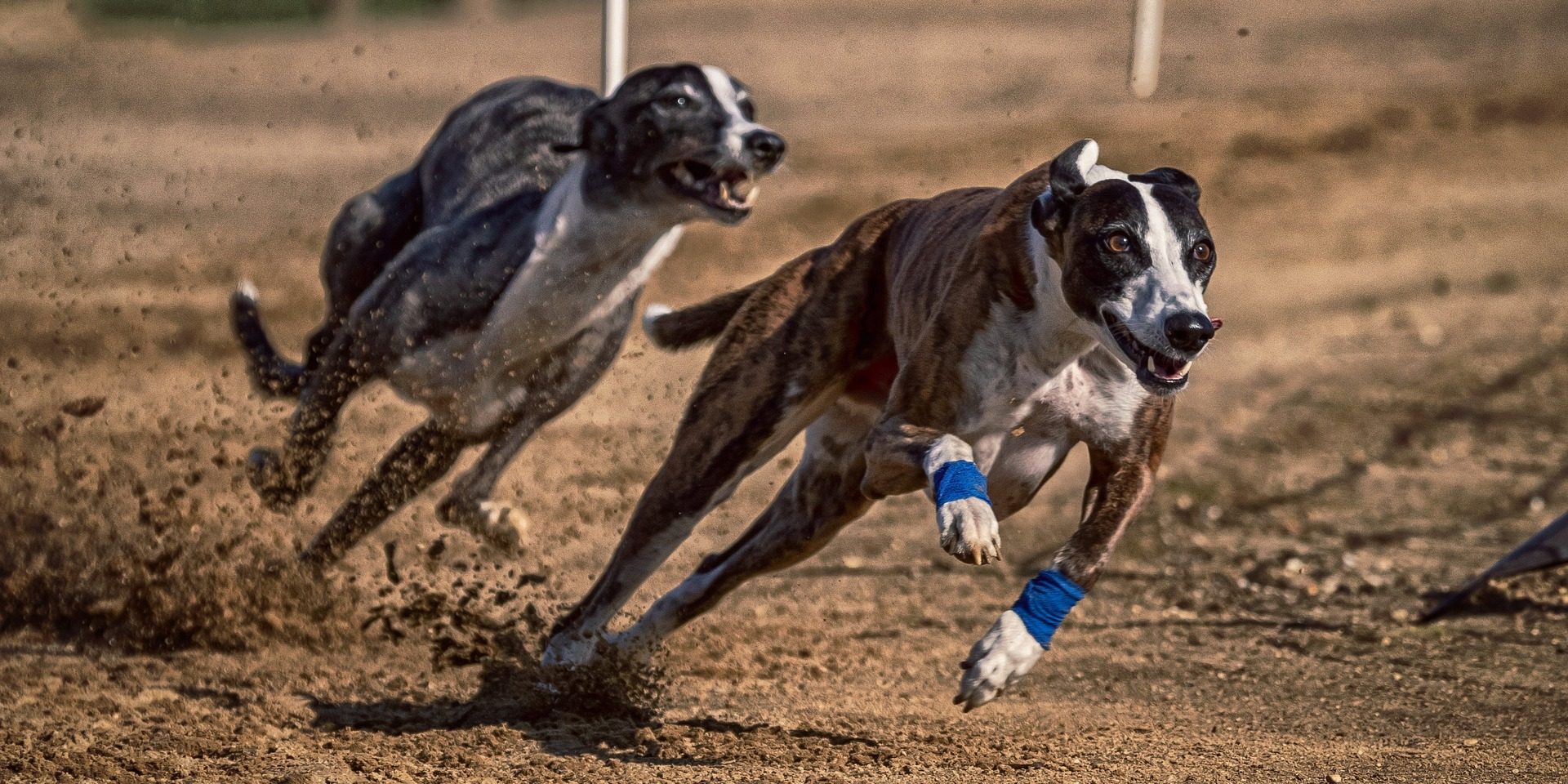 “The hare is on the move for the 20:53, run over 480 meters. Byker Grove is in trap one, the odds-on favourite Droopys United is in the blue of trap two, outside him is Moscow Flyer, Not Now Bernard has a chance in trap four, in five is Pinkerton Pistol, and last comes the wide runner in the black and white stripes, Sally Gunner.”

I pulled up the hood of my parka in protection against the Northamptonshire drizzle. Why couldn’t it be dry for once? I didn’t have to go every time she ran, but I felt a sense of duty, like a proud mother sitting through her child’s school play. Maybe one day she’d win a trophy race and we’d stand on the podium.

Six white boxes stood locked together on the dark brown sand. My stomach was a twisted knot. I was desperate for her to show the pace that my trainer Pom assured me was there. If she didn’t, it was time for me to find a new partner to bet on. Do it for us girls, Sally, I thought.

Towcester was supposed to be the premier UK track, but the money from The Greyhound Derby last year hadn’t filtered down into improving the toilets or replacing the beer-stained lino in the bar. The ‘grandstand’ was miles from the action, so I stood trackside, open to the elements. A yellow tractor next to the digital display in the middle of the track, looked like it had lost its job on the set of Bob the Builder. The punters were angry men, between thirty and fifty with spiky hair and the kind of jewellery that screams for attention. So why wasn’t I dining at a fancy London restaurant, or putting my feet up on my sofa with a glass of wine? Well, I preferred to spend Friday nights with Sally, rather than with Mum, Dad, and their probing questions about my love life.

I felt around for the betting slip in my pocket — an All Ways Trio on two, four and six. Her vet’s bills were costing me enough, so sixty quid was a bit rash, but this could be her last race with me. I pictured her, primed and ready in her box.

“They’re off. Six gets the jump, bursting out of the trap. She reaches the first corner a length ahead of Byker Grove and the favourite in trap two.”

What a start. “Get up there, girl,” I shouted, trying to give some support, but the wind ripped my words away and carried them off past the stand and the bookmakers stands. I suddenly felt guilty about my side bet — a handshake with that smarmy tosser Farley. What had I done? Sally was too jumpy to adopt, so I couldn’t take her, but I loved that animal and didn’t want her to go to Farley’s kennels.

I strained my eyes, watching the dogs skidding around the first corner, jostling for position, wet sand flying like shrapnel. Sally stayed wide, her black coat catching the glint of the floodlights. With every turn she would lose ground, but a high-speed collision would mean the end of her challenge. She’d come a long way since Simon had bought her as a puppy. “You know, like Sally Gunnell . . . but for Arsenal,” he’d said, handing me an ownership certificate on our anniversary. What a romantic he was. And now, after he’d shacked up with one of his other ‘bitches’, I was left footing the three-hundred-a-month kennel costs.

“A fast pace in this A2 race. Into the back straight and they settle along the rail. Byker Grove, chased by Andrew Farley’s well-fancied Droopys United. The six dog pushed out of it on the outside. Moscow Flyer joins the line.”

Positioning was everything in greyhound racing, and as a lighter animal, Sally needed to use a lot of ‘track craft’ as Pom put it. I glanced over my shoulder and saw him in the stand in jeans and a turban, blabbering into his phone as usual. He was a nice bloke, but he could never focus on just one thing. He was running an import business and training dogs during the week and he did the car boots on Sundays.

I scrunched up the ticket in my hand. Four was nowhere, and it wasn’t looking good for Sally. Maybe Mum and Dad were right, I had to move on, make better financial decisions. I’d never be able to save for a deposit on a house while spending so much on this ridiculous hobby.

If only Farley’s dog got bumped she might be able to nudge through. But, the favourite was right where he should be, hugging the rail, tucked in second. Farley was a good trainer. Not a huge name, but it wasn’t like I had the resources to rival his dogs, and unlike Pom, he did this full time. I never liked losing a bet, but if Droopys United beat Sally, he’d train her well. He probably picked up half of his stable that way — scavenging off amateurs like me. “If your little runt beats Droopys, I’ll pay for it’s entry to The Derby,” he had said, laughing into his white wine.

“Droopys United attacks the leader on the bend. Byker Grove is going backwards . . . trap two leading, and now the six-dog, the six-dog squeezes through to the inside! Two and six on the final bend.”

She’d slipped through an impossible gap. Track craft. “Come on Sally!” I shouted, not caring how ‘amateur’ I sounded. The last three seconds of the race passed in slow motion, the churned up sand hovering in the air, the dogs flying.

All I could think about was wiping the smile off Andrew Farley’s face. Over the racing year, I’d seen him get handsy with a young waitress in Hove and spit at a handler at Belle Vue for being ‘gypsy scum’. He always wore his Barbour jacket as if he expected to rub shoulders with Princess Anne at the Cheltenham Festival. Please girl, bring it home.

“Trap six is motoring, but two is gaining. Can she hold on? And as they cross the line it’s too close to call. I think Droopys United may have just clinched it. What a race, Ladies and Gentlemen! We’ll have to go to the officials for a photo decision. And look at the time! Twenty-seven eighty-three, that’s a whisker outside the course record. A magnificent run for the bitch in trap six, owned by Jean Billingshurst and trained out of Luton. She gave the favourite a real test. We’ll be back with the official race result as soon as we have it.”

I held my breath and closed my eyes. I couldn’t bring myself to look up and watch the replays.

“Well, this is quite a turn up,” said a voice from behind me. I turned to see Farley under a golf umbrella. There was no escape, it was just me and him, but his huge umbrella blacked my path back to the stands.

“Sorry, I’ve got to get back and talk to my trainer,” I said, trying to side-step him. Pom was probably organising a shipment of mobile chargers from China or asking his nephew to pick up an unwanted piano he’d seen in today’s copy of Friday-Ad.

As I moved towards the grandstand, he caught my arm. “Let’s get you out of this rain.” He motioned for me to join him under the brolly. “We can wait for the result here. You’ve got a lot on the line.”

I sighed. He was right, I was getting soaked, and I couldn’t run away from the bet now. “Might as well wait,” I said.

“Not a bad time. Your bitch runs well in the wet. Droopys hates it.”

Even though he might be beaten, he was dismissive. I decided to fire back. “We both know they’re both better than A2, the difference is I need the prize money—.”

“Well she won’t get any favours from me, young lady. There’s no room for unprofitable dogs at the Farley yard.” He raised his eyebrows. “If she hasn’t won she’ll have to stay in the little leagues. Droopys is my big hope for The Derby.”

We stood waiting, hands on the white rail, looking for clues at the finish line as the handlers rounded up the dogs. How long was this announcement going to take? Even though she was my only link to a failed relationship and a drain on my finances I felt sick at the thought of handing Sally over to this man. She was more reliable than most of my friends in the Luton MILF’s club (a Whatsapp group to which I inexplicably belonged).

“Best of luck,” he said, looking straight ahead.

The announcer finally cut in.

“After a photo booth review, the result of the 20:53 Towcester News A2 race is now in. First by a nose, with a time of 27.83 comes Sally Gunner in trap number six. Second, with an identical time is trap number two, Droopys United. And third in a time of 28.44, trap number four.”

Good girl! What a feeling. My heart was pounding and I was out of breath just standing there. I didn’t want to be a bad winner, so I didn’t say anything, but it was as if a ton of lead ballast had dropped away, and I weighed nothing. Sally was still my dog. Mr Big-time must have been seething. He straightened his jacket, and stuffed his race card back into his pocket.

“Not Now Bernard?” It dawned on me. I’d bloody won the trio.

“Bernard, you beauty!” I shouted over the track. “One hundred . . . and seventeen,” I said. That was over a grand, plus the five-hundred in prize money! I smoothed out the betting slip in my pocket and stroked it between finger and thumb. Sally and me would be together a few more months yet. I was so proud of her, and Pom was right, she did have more in her.

My arch enemy was annoyingly good-natured. “Well done,” he said. “You’ve got a keeper there. Sixteen-to-one too.” He offered a cursory handshake. “Good luck with her.”

Things just kept getting better. If he paid for Sally’s entry to The Greyhound Derby, that was another three hundred pounds, plus it would be a few more nights cheering her on. I couldn’t wait to give her some ‘well done’ strokes. “Perhaps we’ll have a rematch someday.”

I skipped back inside and queued up to collect my winnings. The bar was three deep with punters tearing up tickets. The Tote line was short. I saw Pom waiting, grinning from ear to ear.

He flashed a smile, his teeth as white as his Reebok Classic trainers. “Hey. Not bloody bad, right? Sixteens.” Pom, normally put twenty quid on Sally. It was finally time to collect.

“Well done, Pom. Brilliant. We finally socked it to Farley.” I gave him a hug. “Best get to the winners enclosure after this.” The photo of us together would make the long drives to Sunderland, and cold nights in Catford worth it.

“Sally’s coming back in May for The Derby heats. Farley’s going to write me a cheque.”

He laughed and waggled his head from side to side the way Indian people do. “Not bloody bad. Let’s hope it rains. She likes the rain.”

I held my breath and closed my eyes. I couldn’t bring myself to look up and watch the replays. 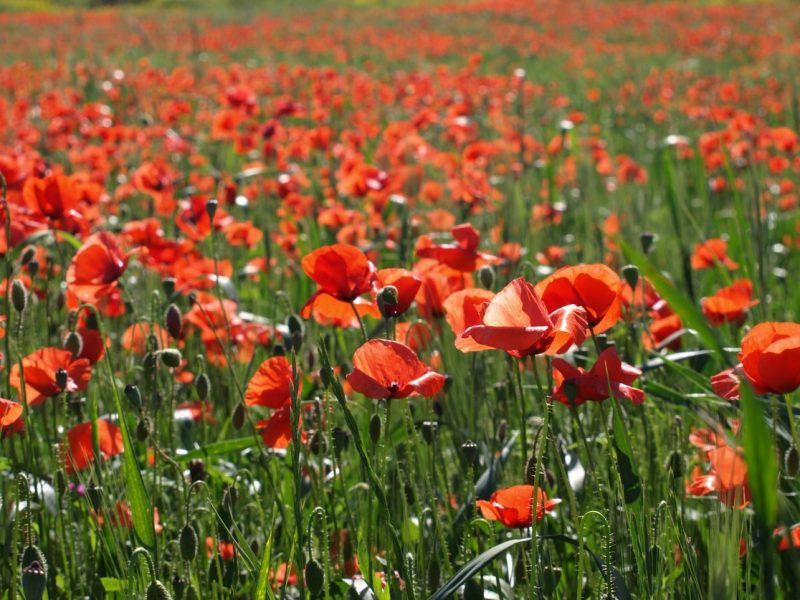