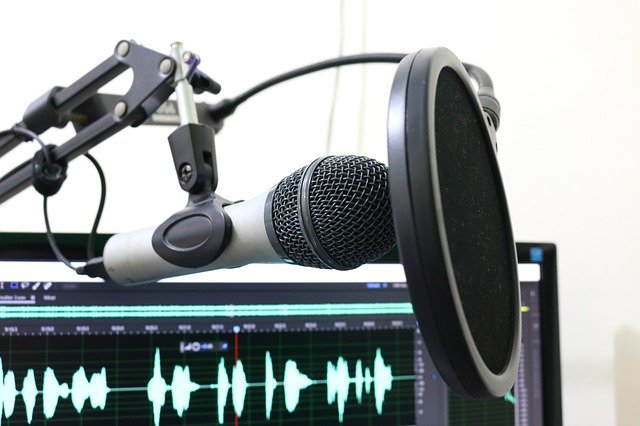 The job of the audio dramatist is to tell a convincing and compelling story through sound alone. Chris Gregory from the Alternative Stories And Fake Realities Podcast takes us through some of the basics of writing for audio drama.

Start with a bang! Try to grab your listener’s attention as soon as possible in your story. You’re asking a lot of listeners. They need to concentrate a little harder on audio drama than they do on TV or film, with all their visual clues. When you’re playing with just one sense, you need to make sure you’re being as interesting and gripping as possible from the word go.

Remember, you’re writing ‘in sound’. Think of yourself as arranging a piece of music but, instead of deciding which instruments will appear, you have voices, sound effects and soundtrack music to play with. Use them in conjunction and combination. Add music to enhance mood, add sounds to suggest locations and write sound notes in the same way a playwright writes stage directions. Listen to how sound effects work by listening to other radio drama, or closing your eyes when watching a TV show. Understand how speech weaves in and out of effects (or vice versa) and when music is used and why.

Because audio sound effects are cheap compared to visual effects, don’t be constrained. You can set a story in space, imagine lavish costumes, hop between London, Paris and New York in ways that would blow a TV budget in a day. This is one of the ways in which audio drama offers a freer writing experience than screenwriting, so take advantage of it. Set your soundscape designer challenges and prepare to be surprised at what they can create!

It’s just as easy for someone in China or Peru to download and listen to your podcast story as it is for your next-door neighbour, so consider telling stories involving universal human issues we can all relate to. If your scope is more modest and you want to tell a story about where you live, try to get a local radio station to help you to share it and build a following in your neighbourhood. When you’re writing, be true to your own experiences and try to make your dialogue reflect the way people you know really speak. As you start to write more dialogue, you’ll find yourself listening out for this, noting the foibles and mannerisms people use and dropping these into your stories.

When writing dialogue, it can be very useful to imagine the voices of the characters speaking it. This way you’ll be able to play out scenes in your head and ask yourself if the speech sounds natural. Use friends, famous actors and members of your family’s voices to do this as you develop your characters, while constantly asking yourself: “Do real people speak like this?”

You’ll need to use dialogue to explain things a TV audience would just be able to see. A mantra for TV and screenwriters is “Show don’t tell” but, of course, this can’t apply to audio drama! There are lots of techniques you can use, though. Let’s imagine your story is set during a heatwave.  Characters may say,  “Wow, it’s hot!” or ask for the air conditioning to be cranked up. You could use the sound of an ice-cream van, birdsong, or drop in a radio weather forecast in the background to suggest the colour and feel of a warm summer day. Think about the sounds people make when they’re really warm. They might sigh,  or say “Phew”, fanning themselves with magazines. Air con units will hum, windows will be opened. Describe these things in your sound directions and your sound designer will have the necessary clues to create the soundscape you’re looking for.

It’s about selling your story to the listener. This can be tricky for new audio dramatists, at first. However, replacing strange and unnatural-sounding dialogue such as, “I’m walking down the street now” with other ways of revealing plot and action to your listeners will help. Many tricks and techniques are available to you. For example, you might have a character leave a voice mail message in which they explain a situation, or you could ask your character a question via another character: “Hey, Trish, where are you going with that big bag?” Trish’s answer could then be the ‘explainer’ your listeners need.

Like all fiction, try to take your characters on a journey within the story. If it helps, think of your own journey into writing audio drama. Remember, your listener needs to care about your characters, so ensuring that an element of change, achieved through struggle or adversity, is essential. Think about the ways in which interactions between characters not only convey your story, but propel your character to where they need to be. All the while, ask yourself how sound can help to tell the story and make this an audio drama first and foremost, rather than a story adapted for audio.

Finally, audio drama can offer elements other media can’t. In these momentous times we’re living through, it’s worth remembering that audio drama is a relatively quick medium in which to work. Production times from script to completion can be surprisingly fast, so up-to-the-minute, topical stories can be created and delivered to the listeners while the events being referred to are still fresh.

Complete guide to making a fiction podcast from The Podcast Host (check out their podcast too): https://www.thepodcasthost.com/fiction-podcasts/how-to-make-a-fiction-podcast/

Subscribe to the BBC’s Drama Of The Week podcast for a range of the best high-budget dramas produced by the BBC.

Murmurs from BBC Sounds is a hugely inventive and innovative series of dramas. Employing prominent exponents of podcast drama, the stories explore the weird and the spooky via modern technology and ghosts in machines.

Alternative Stories And Fake Realities has a whole range of drama, poetry and fiction productions across many genres. One of these is the audio drama The Ark. Broadcast in October 2020. Commissioned by us, it was created by Madeleine F White, Editor of Write On!

The Ark, adapted from Madeleine’s debut novel Mother Of Floods, was one of our top-performing dramas in 2020. Loosely linked to our climate fiction season, The Ark explores a new kind of creation story through the eyes of a dysfunctional family. Set in Kent, it has a love story at its heart and, by delving into the speculative, The Ark doesn’t just confront the contemporary crises we are facing, but leads the listener into reimagining an altogether different future.

Here’s Madeleine, to explain how this collaboration came about:

“One of the things every writer has to do, especially those of us who are published by a small press, is to ensure word about the novel is getting out. Launching Mother Of Floods in April, just after the lockdown hit, was hardly ideal. Many of my launch events were cancelled or went digital. A couple of months later, I remember coming across Alt Stories on Twitter. They were publicising Signe Maene’s drama about Selkies, the Scottish seal women. I listened and was hooked. It also occurred to me that, as Mother Of Floods dealt in ancient myths and legends, Alt Stories might be interested in interviewing me and extracting from my novel, so I got in touch with Chris, who heads up Alt Stories, and he was delighted!

After recording interview answers and a short reading, the episode was broadcast. Chris fed back that it had been very popular, with many positive comments coming back from social media and by email. He asked me to consider writing an audio drama. Initially, I waivered, having never written anything like this before. Two things made up my mind, though. I was struggling with my confidence and therefore my second novel, Sisters Of Storms. Also, I knew that dialogue was a weakness of mine and thought it would be good for me.

We chatted further, and I asked whether it would be OK to have Martha’s dead husband, Dave, as the central character. Chris said there were lots of techniques with which to achieve ‘The ghost in the machine’ effect. Reassured, I started working out how to set Dave’s evolution within the wider narrative and started playing around with the idea of a soundscape. Downloading sample audio scripts and looking at some of Chris’ guidance, was so helpful! As a pianist, I was able to draw on a wider music background to pull together very detailed guidance, which I embedded in the script.

It took me a few days to write the 3000 words or so needed to create a 40-minute drama. Some had been drawn directly from the novel’s dialogue (publishers Crowsnest were happy to give permission), but most was new. One of my proudest moments was when Chris came back to me and said he’d initially thought it was too good for a first script, and that I’d had help! However, he reassured me by sharing that, as he’d read on, he’d noticed the instructions/ directions were not always in the conventional style, so he knew The Ark was all me.

By mid-October, and after another couple of conversations, the actors were cast. This was another wonderful moment. The actors playing Martha and Dave were more experienced, but two recent Italia Conti graduates played Martha’s teenage children. All were equally wonderful. When I heard their reading of the lines I’d written, it all came to life. It made me so proud, not only of The Ark, but of Mother Of Floods as well.

Incidentally, the actors all record from home. Chris then pulls everything together in the studio and adds the sound direction. The production process took a month from start to finish.

The Ark was broadcast at the end of October, and my final proud moment came when Chris got in touch to tell me it had reached the top 50 in the Apple Podcasts UK audio drama charts! We entered it for the Imison prize, but I found out earlier this month we’d been unsuccessful. However, the serialisation of it on BBC Radio Kent over three nights as part of the evening show went a long way to mitigate my disappointment. All in all, it’s been such a positive experience,  I’m planning on writing another audio drama later on in the year!

The life of a writer/ novelist is a lonely one. This process allowed me to collaborate creatively with some very talented people, not least the wonderful Chris Gregory. I’m delighted he’ll be doing a couple of workshops for Pen to Print, as well as pulling together the audio drama competition.”

The job of the audio dramatist is to tell a convincing and compelling story through sound alone.