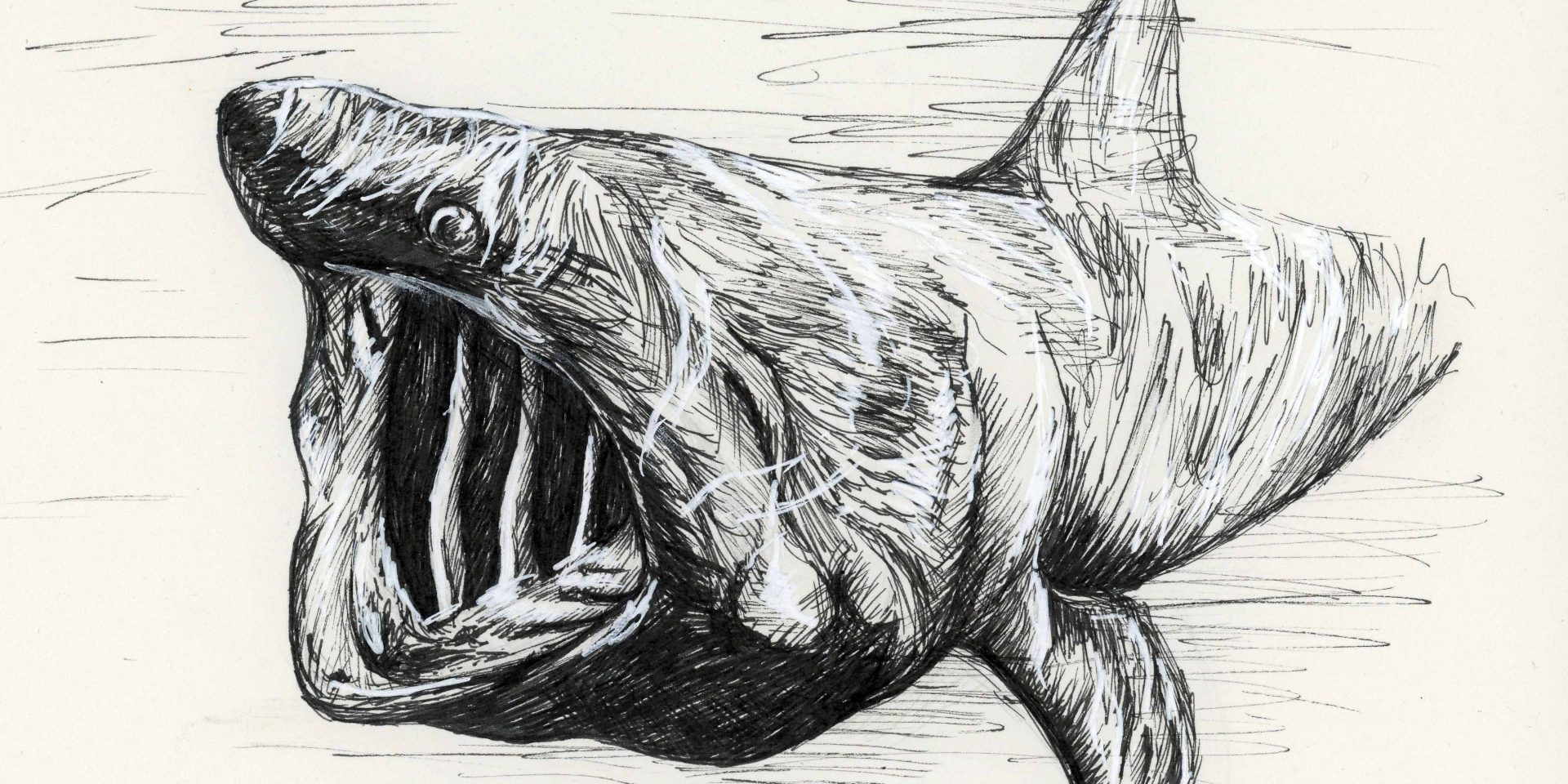 It’s ‘World Oceans Day’ tomorrow (June 8), so today I’m  focussing on that sublime blue that encompasses not only our planet, but our creativity. Moby Dick, Pirates Of The Caribbean, The Little Mermaid and many other tales, feature the ocean as an integral part of the story. It’s a home to both princesses and unfathomable beasts; a place to sail on and swim deeply in.

The Romantic period popularised the philosophical aesthetic of ‘the Sublime’, which refers to ‘a greatness beyond all possibility of calculation, measurement, or imitation’. Immanuel Kant explained that it is an attribute of our mind (imagination) that causes ‘the Sublime’, while nature (an object) is only beautiful.

So it is our relationship with the ocean that is sublime, or as Kant called it: “the noble, the splendid and the terrifying”. Something as boundless, great and forceful as the ocean illicits both fear at its endlessness, and awe at its majesty.

This week, I have an ‘ocean’ of submissions! So, let’s dive into the first feature from Emmanuel. In the image below, he has personified the ocean: 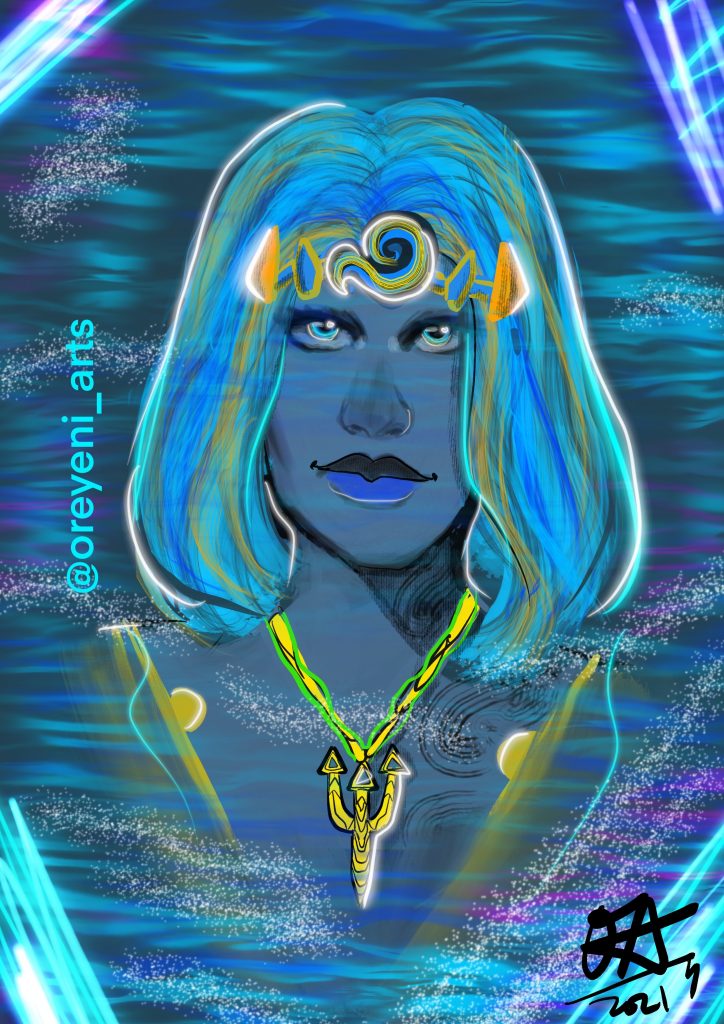 Next, we have nudi, who tells us:

“I was recently amused by someone’s creative attempt to insult me by calling me an ‘asinine soft-bodied gastropod lurker’ – a description they’d found for the sea slugs known as nudibranchs (‘naked gills’).

There are over 3,000 nudi species of all colours and patterns and they breathe through exposed gills, usually located on their butt. This poem reflects the remarkable skills of a few (and perhaps some of my own).

Response to a workshop prompt from Poet Rakaya Fetuga: So they call me.”

crave the sky?
nibble on some seaweed, photosynthesise

fed up with your body?
sever it from your head, form another

fuck someone you wish you hadn’t?
detach your penis, grow a new one

others messing with you?
eat stinging hydroid barbs, harpoon the enemy!

need a change of scenery?
cling to sargassum, disappear on the gulf stream 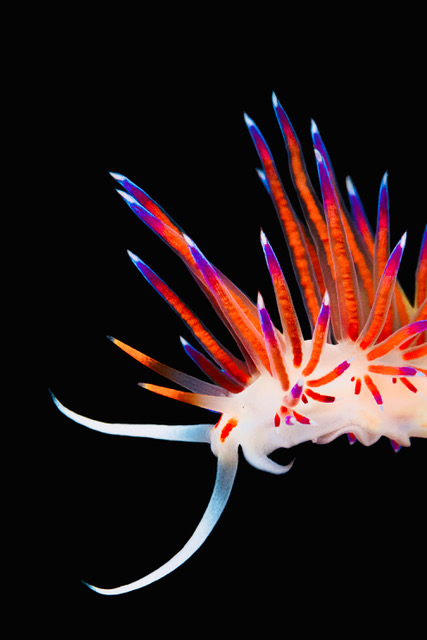 Next is a short story from Bob Thompson.

I could scarcely believe my eyes. I scraped away at the shingle using my hands until the object was revealed in its entirety. It was a perfect circle sparkling amongst the stones. Its amber colour, flecked with brown, giving it depth and substance. Where had this gem been set? In the crown of an ancient king? Or perhaps in a brooch holding together the dress of a Saxon maiden?

I picked it up gently. On closer inspection, it was even better than I thought. It had a swirl cut into the design adding to a sense of perspective. This was the one, I decided. This would win the competition. I wrapped it in my clean handkerchief and put it in my pocket before making my way back to the coach.

We had been supposed to be going to Rainham, in order to scour the shoreline for treasure, until someone pointed out to the headmaster  it used to be used as a firing range. He’d had a sudden vision of a class of thirteen-year-olds digging up unexploded munitions and, so, sanctioned this longer trip instead.

Hastings fitted the bill. We’d been studying the Normans in history and, although nothing actually happened at Hastings, it did have a long, mainly shingle beach and plenty of parking for the coach.

We’d set off early, passing through the newly-opened Dartford tunnel just before nine-thirty. Several parents had been roped in to help. They sat at the front of the coach with the teachers leaving the rest of the bus to fifteen or so unruly schoolkids.

Once we arrived in Hastings the plan was to comb the beach for a couple of hours before coming together for our packed lunch. In the afternoon we would be taking the treasures we had found to the local museum for them to be evaluated and  a winner would be chosen.

I noticed that Piper had brought a trowel. I hadn’t given much thought to the process of finding treasure – specifically that it might be buried. Luckily I noticed my mother had provided me with a dessert spoon as part of my lunch pack, allowing me to improvise.

Piper was also reading a book or, at least, he was pretending to. Really he was flaunting the book and commenting ostentatiously on the contents. It was called Uncovering Ancient Artefacts. We were all supposed to be impressed.

It was a grey day. By the time we reached Hastings a sea mist was rolling in, delivering a fine, penetrating drizzle. Most of the teachers, along with the quisling parents, retreated into Carlo’s Café to sit out the weather while Mr Barron, whose geography field trip this was, ushered us out of the warm, dry coach onto the cold, wet beach.

We organised ourselves so that we each had a part of the beach to investigate. Several holes were dug in rapid time as young hands uncovered buried plastic bags, empty tins and driftwood. Mr Barron did his best, trudging up and down making encouraging noises.

I noticed that Piper had eschewed the shingle beach altogether and had taken off his shoes and socks to dig in the patches of sand revealed by the falling tide. He drifted in and out of view as the mist swirled around but I was sure that I saw him take something from his pocket and place it in a hole he had dug.

I’d all but given up on my quest and was attempting to take a semblance of cover in the lee of one of the fishing boats drawn up on the beach, when I became aware of Mr Barron bearing down on me. He was wearing a red kagool with matching over trousers, both running with water. His glasses were partially misted up and rain was dripping off his moustache.

“Found anything interesting?” he said. I shook my head, looked down and there was the jewel.

He watched as I picked it up. “Best take that back to the coach,” he said. “We’ll eat our lunches there. No sense in getting wetter than we need to.”

In the museum, our artefacts were spread out on a table. We watched as the curator examined each of them. It was quite a good haul. Several bits of clay pipes; various small parts of boats; some smashed pottery; and my jewel. To my untrained eye, there was only one winner.

He talked us through each item telling us about the profusion of clay pipes that were found everywhere, how boats were wrecked along the coast and how the tides ensured that their remains appeared where they did. After a while, there were only two items left, a nondescript shard of pottery and my gorgeous stone.

He started with the pottery declaring it unusual but significant, in that it was of Roman origin and predated the Normans by around a thousand years. Then it was my turn. An item of important social history he pronounced. After the war, as people became more mobile, thousands would congregate on the beaches at Hastings and all along the south coast. Inevitably, they left behind litter and with the best will in the world, some of this migrated into the sea.

He held my jewel aloft so that it shone in the lights. “This demonstrates the power of the sea,” he said. “Over time, it has ground and shaped this item into the beautiful symmetry that we see today. Who would think that the bottom of a bottle of Double Diamond would end up like this?”

My world stood still. I could hear the sniggering of my classmates. Clever clogs Piper won, of course, with his Roman pottery. I can’t help but be suspicious, though, that he planted it with that in mind.

I still have my handsome jewel. It sits on top of a pile of papers to stop them from blowing away. In my mind’s eye it’s treasure, adorning the regalia of a Saxon king.

Here is an illustration done entirely in pen of a Basking shark by artist Michelle Sutton. Michelle tells us that they are the UK’s largest fish and can currently be sighted off the Cornish coast at the moment. 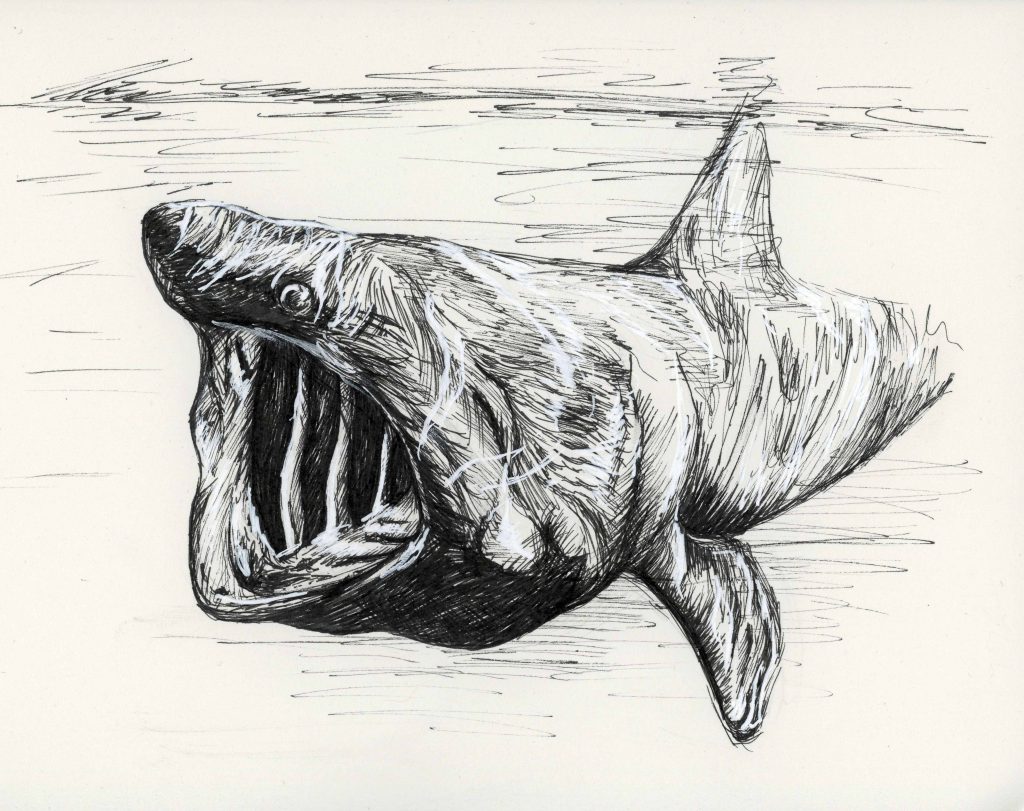 We’re jumping back into poetry now with a feature from Diya:

Just as it takes

We will finish this Monday voyage with a short story from deputy editor Claire Buss.

I love the ocean. The vastness of blue. The way the sunshine sparkles on the surf, the poetic leaping of dolphins, a shower of whale spray and flashes of shoals darting beneath the surface. But what really lies beneath?

I don’t like seaweed. It wraps itself around your legs, all feathery and tendril-like. And then, before you know it, the plant tightens its grip and you’ve lost your balance. You’re fighting for a breath. The salt is burning your throat as you gasp for air and no matter how hard you struggle, you simply can’t get your leg free. Seaweed. It’s the salad of the ocean. Best avoided.

I’ve given myself sunstroke by spending an idyllic hour snorkelling around the Great Barrier Reef looking at the dead coral and the few fish that fight tenaciously to survive in the middle of ignorant tourism. I’ve seen reef sharks, tiger sharks and enormous groupers who apparently don’t eat people. But watch those eyes and that huge mouth and the way it lurks in the dark cavern beneath you as you swim ponderously by.

You know that bit in the ocean where the water suddenly changes colour? Do you know what that is? Certain death. Otherwise known as the drop-off because that’s not a terrifying description – oh no. The ground beneath your feet literally drops away hundreds and hundreds of metres. What lies beneath? You’re okay, you’re floating, you’re swimming, you’re not touching the floor anyway. It’s not the same as not being able to see the damn thing. There’s a certain comfort in knowing that you could sink down and touch solid ground, so to speak. I mean, why else would we invent swimming pools with deep ends? We like to pretend to sink under the water, knowing full well that we can push off, back to the surface, anytime we like. None of that deep blue nothing, sinking away into oblivion beneath us.

You tread water, trying not to inhale too much salt water as you bob like a little cork that lost its bottle. Just hanging there, in the sea. You can’t even see an edge. The shore in front of you looks like a troupe of dancing ants came to town. If Jaws ate you right now, no one could stop him. There could be seventeen sharks circling you and you wouldn’t even know because you can’t see in three hundred and sixty degrees constantly. You’ve put your life on the line just so you can go have a little swim in the sea.

Now, I know, you can always paddle and paddling is wonderful provided you are wearing the correct footwear. None of this bare toes dabbling in the sea froth. Oh no. You could catch anything. There’s bound to be a seawater version of the verruca. And then you’ve got crabs and cockles and mussels and whelks and clams and jellyfish and sea urchins. Good god, why take the risk?

Don’t forget to check out Issue 8 of WriteOn! magazine here and submit your work to pentoprint@lbbd.gov.uk.

Something as boundless, great and forceful as the ocean illicits both fear at its endlessness, and awe at its majesty.