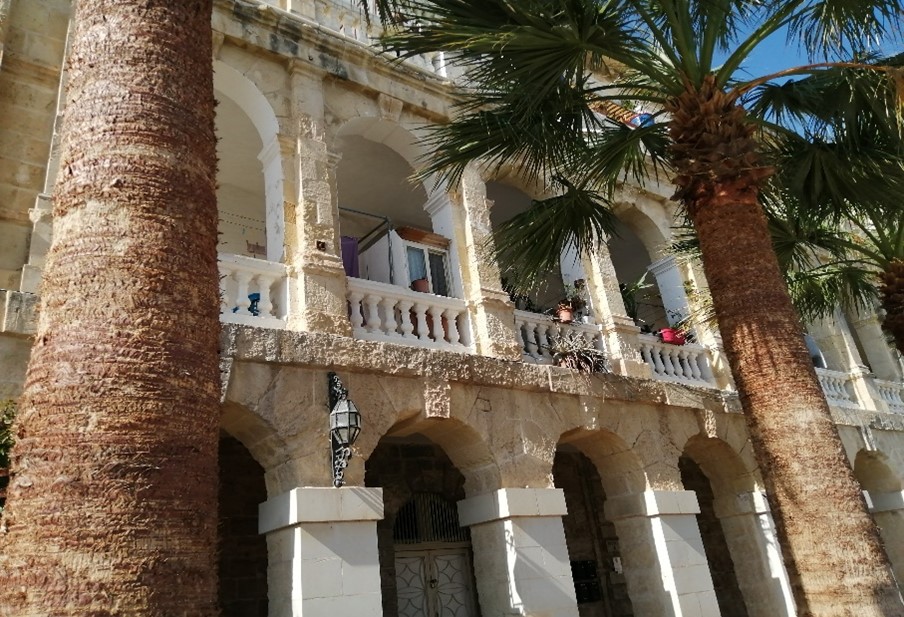 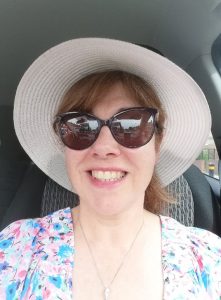 Hello. I’m Mirabel and I would like to welcome you to the first Showcase page of November.

This month, we’re continuing with the theme of ‘home’, and I’ll bring you a variety of writing exploring what home means to different people. November is a time of remembrance, so next week I’m sharing a poem honouring the soldiers who gave their lives for our freedom. I’ll also be writing about November customs in my country of origin, Malta.

But back to today’s page! The first piece, Blue, was sent in by Hongwei. It depicts the feelings of those who’ve left their country and started building a new life abroad and making new friends. 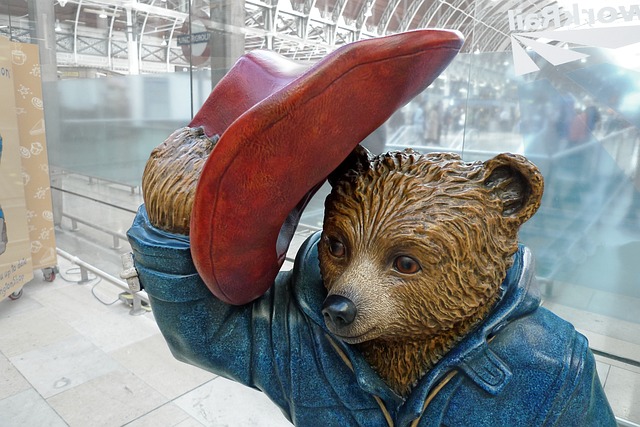 I don’t quite remember how things began. That afternoon I browsed Grindr out of boredom, and was drawn to your profile picture. You were not particularly good-looking, but there was something about you that reminded me of someone, perhaps a friend. I messaged you on the app. I like your shirt, I said. What I should have said is: I love your eyes – your eyes are so deep and blue that they draw me in.

We met at Paddington Station on a Spring afternoon. The sun was bright, the sky was blue, and the air was crisp. I wasn’t aware of the Paddington bear; I was new to this country. As an international student studying at a London university, I’ve just embarked on a journey, which has led me to doubt myself. Everything feels different and alien. The weather is always cold and wet, and people are forever busy and impatient. I can’t even understand my professor’s accent! I hadn’t expected the loneliness one has to endure when living abroad. But doing a university course is the only way I can be myself. Back in China, I had heard of Soho and the ‘gay street’ but had never been to one until I arrived in London a month ago. I bought a rainbow-coloured bag in one of the shops.

It didn’t take you long to find me in front of a newsstand. I’m ordinary-looking, but I don’t imagine many Asian guys would carry a rainbow-coloured bag in public! I don’t have to tell the whole world who I am, but the bag seemed a good idea for a first-time meeting.

We sat down inside a café next to a window. My rainbow bag attracted some random looks from passers-by, but no one seemed to care. I was fascinated by your profession as a freelance filmmaker. What films do you make? How can anyone make a living doing the job? I wondered, but was too polite to ask. You were curious about my experience as a gay man from China. I told you about the booming gay scenes in Chinese cities: the bars, the clubs, the underground queer film festival, and the unsuccessful pride event where organisers got into trouble with the police. You laughed, and I noticed you had a nice smile. That made me feel more relaxed. We have a shared interest in films: Fassbinder, Warhol, Almodóvar… Despite linguistic and cultural differences, we found a shared vocabulary and queer cultural heritage between us.

You wanted to show me your DVD collections, so we ended up in your flat, a small one-bed in South London. You put Derek Jarman’s Blue in the DVD player. The blue light immediately lit up the whole room. Bathed in the blue light, we were kissing, and then lay naked in bed. I don’t remember the plot of the film, but the heat of our bodies warmed up the blue air in the room.

We kissed goodbye late that evening. I rushed to the tube station to catch the train back to my student accommodation. I was searching all my pockets for the Oyster card in front of the ticket barrier. A blue light flashed on my phone. It was lovely to meet you, you messaged, do you want to meet again?

The next writer is a new contributor. I met Thomas Nixon at one of the creative writing classes in Sunderland, where we were writing flash fiction. I found his writing to be both punchy and witty.

George had given up any notion of arriving at the meeting on time, or even leaving the bus at all. What began as a routine case of gridlock had morphed into a full-blown incident, with a torrent of blue lights parading ahead of them.

He was secretly relieved, of course. Emailing his apologies, he took out his Tupperware container and trusty paperback, reclining when a phone buzzed in the aisle across from him.

“Excuse me,” the gentleman enquired, smiling politely. “I believe we’re in the same meeting.”

“Indeed. So, regarding those income figures…”

This was the third payload he’d delivered today; plumes of mist falling from the sky before landing gracefully over the trees. There it solidified, creating a layer of protection and preventing devastating fires.

Lt. Carter thought he was doing a good thing. That by dousing the forests in this chemical, he was saving lives.

But Carter didn’t know what it did to people. He didn’t know about the women and children that choked to death minutes after breathing it.

Nobody knew, in fact. Not of today’s deaths, or those across the valley.

But once they did, would they consider it necessary?

I remember when he told me he was set to deploy. He walked up to me and said, “Dad, I’m going,” and I knew we weren’t talking ’bout Hawaii.

It wasn’t long after Owen got shipped back. Lewis had just graduated, top of his class…

I was too goddamn proud, I guess. I should have told him, “Louie, we need you here. I need you. Your Mom needs you. Our town needs you.”

It hurts, but at least my boys are together now…

You can connect with Thomas through Pen to Print.

The next piece I chose is by a Northern writer, Doreen Shannon, who wrote her debut novel, The Gate Keeper’s 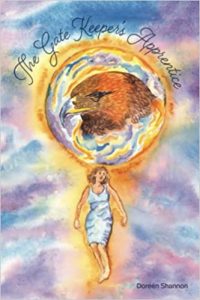 Apprentice, after retiring from teaching. This book reminds me of the strength we carry within us.

With strong strokes, I continued to dive deeper, and with each depth marker, a vision from my life flashed before my eyes. As I passed the fifty-five-metre marker, I became transfixed by a glowing golden light. My lungs felt as if they would burst as the light enveloped me in its warm comforting glow. I tried to turn around and move upwards, and then a sweet sound filled my ears. The sound was soothing, and I allowed myself to relax, thinking this is it, the finale, death, sweet death.

The next sound I heard was a wheezing, whooshing noise, followed by a bleeping sound. Both sounds were familiar to me. They had been my constant companions since the accident. I felt betrayed. The cocktail of lethal drugs Anne had provided me with had failed. The suicide bid was unsuccessful ‘Locked-in Syndrome’ had won. I screamed inside my head. I remained trapped in this useless body with the respirator breathing for me, and a life of nursing care twenty-four-seven.

As I lay there feeling sorry for myself, I became aware of an envelope as it slid under the door. It floated in the air towards me, and to my amazement, opened itself up. Inside were several sheets of paper. The paper, an invitation, slid out and floated inches from my face. In my mind, I heard the letter being read out to me in a voice that, for some reason, reminded me of a department store Santa Claus.

“Namaste. That is a lovely word. What does it mean?” I asked her.

With her hands in a prayer position at heart level, she bowed towards me and said Namaste. She gave me the most beautiful smile that lit up her whole face. She told me that Namaste is a Sanskrit word, which is often translated as:

“That one word means all of that!” I exclaimed.

She looked at me with genuine sincerity. “One day, you will come to my aid, and you will use that word authentically. But now it is time for the Shamans and ancestors to lead you down to the underworld to meet your power animal.”

Following her gaze, I saw that the room was filled with indigenous people from several countries and tribes. They were drumming, chanting, and dancing. The whole scene was surreal and overwhelming. One of the elders in full tribal dress came to my right, and in a hypnotic tone of voice urged me to. “Follow the sound of my drum. It will take you to the underworld where your power animal will be waiting to meet you.”

Not wanting to appear prideful, I quipped, “That seemed to go ok in the end.”

The Gate Keeper sounded playful. “Sarah, you had us all at ‘Love and Blessings’…” Finally, sounding excited and triumphant, he announced, “The convergence has begun.”

The next sound I heard was a wheezing, whooshing noise, followed by a bleeping sound. Both sounds were very familiar. They were my companions immediately after the accident.

Trapped once again in a useless broken body with a respirator breathing for me, and the need for nursing care twenty-four-seven. I was back to the time before the invitation.

Ending up back where I started was a shock. Sarah of old would have felt frustrated and betrayed. This does not seem right. Did something go wrong? Have faith, Sarah, trust in a miracle.

However, my time with the Gate Keeper had taught me many things that changed my perspective on life. The most valuable, that I took away from the apprenticeship was the ability to navigate uncertainty and appreciate each moment.

I am alive! Even in this state of paralysis, there is the potential for unlimited creativity.

Kindle and paperback format of Doreen’s novel can be found on this link to Amazon: amazon.co.uk/Gate-Keepers-Apprentice-Doreen-Shannon/dp/B09MYYXM5M 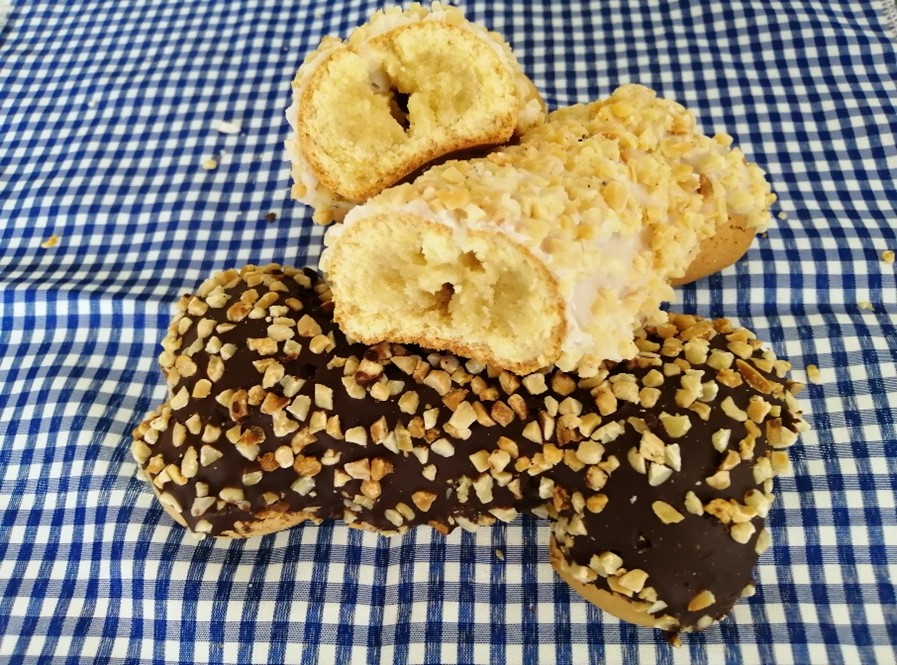 Dead Man’s Bones is a sweet pastry in the shape of the humerus bone, traditionally eaten in Malta on the second of November. This is a day of prayer, when many Maltese attend Mass three times to commemorate departed loved ones.

To soften the dates, put everything in a saucepan and warm through on a low heat for five minutes and allow to cool. Do not burn.

To form the dough mix the flour and butter to resemble breadcrumbs. Add the remaining ingredients except for the water. Slowly add the water until you form a dough. Chill in the fridge for an hour.

For the almond filling. Mix all the ingredients together and form a paste. Chill in the fridge, as with the pastry.

Roll the dough to between 1.5 or 2cm thick. Cut out bone shapes as per the picture.

Place a generous amount of filling on half the dough bones and cover with the rest. Seal the sides well.

Bake in a preheated oven, gas 180c or 350F for about 30 minutes or until lightly golden brown.

Cool and decorate with a drizzle of icing or melted chocolate. Sprinkle with crushed toasted almonds or crushed nut/milk-free choc chips.

Note: The flour used in this recipe is not gluten-free. Please do double-check all ingredient labels where allergies are concerned.