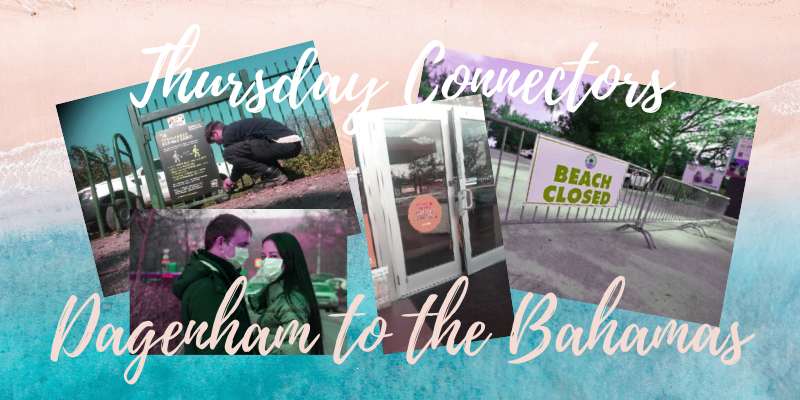 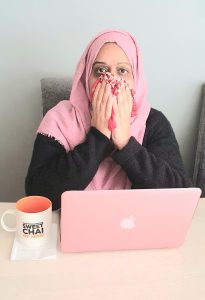 Hi all! I’m checking in from my home in Dagenham because that’s where I’m doing the lockdown, with my three kids and husband. No other place for it really; our safe haven, within the blossoming, suburbs of Greater London. And to let you all in on a secret, I’m trying my absolute best to connect with you on this nothing out of the ordinary grey sky day, with my nose and mouth covered with a flowery, pink, tasseled bandana. And not because I think it’s an easier available substitute for a mask and is going to protect me from the Covid-19 germs in my own home but,  the husband, bless him, is off work and has decided to deck the walls of our dining room with Dulux, shadow chic, silk,  knowing full well that I suffer from the ‘I can’t stand the smell of paint’ syndrome.

It won’t be like this every Thursday though. I’m promised, (and bribed by his willingness to cook the biryani for dinner tonight), into accepting that the sun will soon shine and the smells will be gone quickly. For now, I’ll hold him to the biryani. But myself? Alright, I can commit to sit on my desk more dolled up, perhaps in my best tiara and tutu and not my mismatched PJ’s, the next time I attempt to connect with you like-minded people who, like me, are using their passion for their craft, to get through the challenges  facing us all in these unprecedented times.

Thursday Connectors has been set up to do exactly that and with that in mind the tag line, ‘Stories from Home and Away’ is how I’d like to position this idea. As I go through the various submissions that have already been sent in, I’m feeling a bit like a historian. The irony though that, it’s not history that everyone’s talking about, it’s what we’re currently living. We’re experiencing something the majority of us would never have imagined. Thursday Connectors allows us to share this bit of history with each other through our writing. Maybe  a few months from now, when we look back at these stories, our outlook and interpretation of this occurrence may have already altered. It could even be that our whole outlook on life, along with the way we see the world, will have changed significantly. Who knows?

This week’s theme is From Head in the Clouds, to Feet on the Ground, so I’d like to kick things off with a story from ‘Away’ rather than ‘Home’ with Stephen Hunt sharing his thoughts from The Bahamas… I’m already imagining the calm sea-green water laid out in front of me, a cloudless blue sky above and the softest sandy dust beneath my feet. I’m transported to heaven in an instant…

Hi to Stephen and hello to The Bahamas. Let’s connect…

There is a moment early in HG Wells,’ The War of the Worlds. For those unfamiliar with the book, Martians land on the Earth with the intent of claiming it as their own but, early on, such things seem almost unimaginable to people. Even after the first cylinder lands, and a heat ray rises and opens fire, Wells writes of the “most extraordinary thing” being, “the dovetailing of the commonplace habits of our social order with the first beginnings of the series of events that was to topple that social order headlong”.

He talks of people dining and supping, gardening after the labours of the day, children being put to bed, young people walking through the lanes in love, students poring over their books.

The War of the Worlds was published in 1898 but, for us, that moment of normality before a sudden, shocking transformation was not so long ago.

I live in The Bahamas, and the last day of the year in 2019 saw the front pages filled with familiar stories. There was preparation for the New Year Junkanoo, a festival of music and dancing that fills the streets on New Year morning. There had been protests around the Boxing Day Junkanoo just a few days before and there were still court cases pending. These included a man who broke out of jail because he wanted to spend Christmas with his family. Little did anyone know that on the same day, half a world away in China, the first cases of a virus that would change the world were being uncovered.

December 31, 2019, saw authorities in the city of Wuhan report a cluster of pneumonia cases of an unknown cause. In the following days, the investigation began. As we all now know, what was uncovered was a new coronavirus. It has been named SARS-CoV-2, or more commonly referred to as COVID-19.

Even as it began to spread in China, for much of the world this was a problem over there and, when it first began to be reported, it was in the international pages of newspapers towards the back.

Things were no different in The Bahamas – at first. People went about their daily business, and there were few concerns publicly expressed about the virus. Life proceeded as normal. As Wells wrote more than a century before, “…the daily routine of working, eating, drinking, sleeping, went on as it had done for countless years”.

By the end of January though, the world was waking from its slumber. When the World Health Organization declared the outbreak a global emergency on January 30, The Bahamas started to take precautions, quarantining anyone who had travelled to China in the past 20 days.

It was the scenes in Italy that brought the horror of the coronavirus home. Seeing the more widespread videos of people in lockdown and hearing the reports of the impact on the older Italian population was an undeniable wake-up call.

The Bahamas has been both lucky and unlucky so far. First, the luck – we’ve seen the virus coming from afar. Seeing what the rest of the world has had to deal with has given us the chance to react before it got here. At the time of writing only nine cases have been diagnosed. That’s expected to rise. Some of these cases have come from contact within the community but, the advance notice allowed the country to plan. When the first case here was confirmed on March 15, the government shut down the schools.

Since then, a curfew has been put in place at night. It’s now been  extended to a 24-hour curfew as people didn’t pay proper attention to the call for social distancing; taking to the beach and to parties still, exactly the kind of socialising that encourages the virus to spread. That’s where we are as I write this, in a world where everyone is shut indoors, possibly until the end of April. It’ll be hard, but people seem to be recognising this is what it takes to stop the spread.

Where The Bahamas has been unlucky is in how it will be affected by the economic impact. Pretty much half of the country is dependent on tourism, and there’s not going to be a lot of that for a long time. The vast majority of visitors come from our near neighbour, the United States, and you don’t have to look far to see how many cases of the virus are being confirmed there.

The Bahamas itself has been transformed. Once crowded streets are deserted. Beaches are closed. Cruise ship berths stand empty. Airports stand silent. Police put up barriers on the streets at night and run checkpoints to ensure only essential workers are out and about. 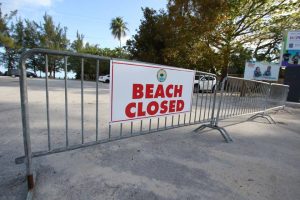 Indoors, parents juggle working from home and trying to supervise their children’s schoolwork. Many have lost their jobs; unemployment is somewhere around one in three people now after hotels and other tourist-dependent businesses closed their doors and laid off staff. Many are trying to work out how to get by on the money they had left and the money the government is making available in support. Funds are tight;  last year the country was badly hit by Hurricane Dorian, so it’s not as if government coffers were full.

And yet, for the moment, there is a feeling of determination. The Prime Minister, Dr Hubert Minnis, has called  Bahamians the “people of the rising sun”, a nod to the national anthem which urges, “Lift up your head to the rising sun, Bahamaland”.

This is just the beginning of a long journey. We still don’t know the extent of how much this will affect us all.  We should know though, that we are like those people trying to continue our normal lives with our commonplace habits, even as we face the beginnings of a series of events.

And yet, there is something we should take note of, something that is happening around the world. In the darkest of hours, people are turning to art to get them through it: books, films, music and more. People who can conjure up worlds from their imagination are helping others get through the tough times.

Just as medical experts battle the virus itself, so authors, artists, musicians and filmmakers are able to battle the despair it brings by doing the one thing we know how to do best: create.

One of the reasons I picked this piece was that it allowed me to draw on many parallels with how life here has also changed amidst the outbreak, overtaking any form of normalcy inside and outside our homes. For next week though, I have chosen a story much closer to home. Our very own Write On! Page Editor Holly King shares some of her struggles in terms of trying to source food and medicines, particularly initially when people were panic buying. She also tells us about her Facebook diabetes support group and how it’s helping her overcome some of the problems she’s facing as the country delves deeper into stricter terms of lockdown.

Here’s a short extract to whet your appetites…

“My community is doing what it was created to do – come at an obstacle with research, practicality and togetherness to support as many people as possible. We are openly sharing updates, tips on how to keep yourselves safe and how to ensure your home is clean, NHS guidance, and initiatives and articles we come across; because each of our members wants to help every person.”

Well, that’s it for this Thursday then. I’ll be back, wearing tiara and tutu, for next week’s connectors. So, continue to send your submissions to pentoprint@lbbd.gov.uk.

In the meantime stay safe and stay indoors. And don’t forget to keep writing…

You can connect with Stephen Hunt on Twitter @AlteredInstinct, with Holly King @kinghols and with Farzana Hakim @farzanahakim.

The Bahamas itself has been transformed. Once crowded streets are now empty. Beaches are closed. Cruise ship berths stand empty. Airports are
deserted. Police put up barriers on the streets at night and run checkpoints to ensure only essential workers are out and about.