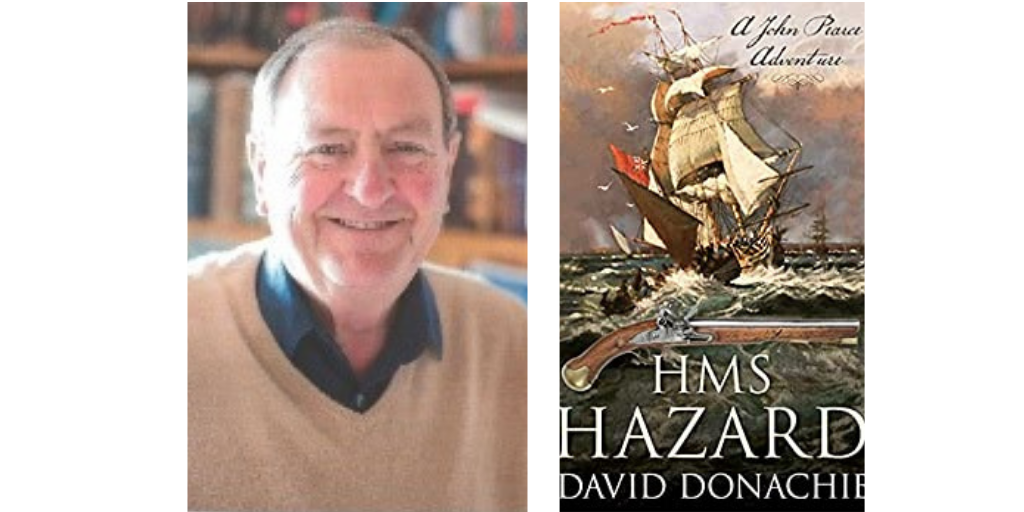 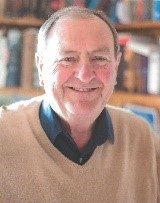 David was born in Edinburgh in 1944. He was educated poorly at a Catholic Selective School, where he excelled in only three subjects: history, geography and truancy. He left school to work on a five-year apprenticeship in his father’s painting and decorating business, but left that after four years to enter into peripatetic employment before fleeing Edinburgh.

David ended up in London, where he began working at the Palladium, before moving to The Old Vic, the National Theatre then run by Sir Laurence Olivier, which, over two terms, was a defining experience. From there on in, he wanted to do something creative, thinking mainly of Film and TV. David hopes some of the excretable scripts he wrote are never discovered, but if they are, he’ll pay! But within them was the germ of an idea he could turn to when his first novel offered was then sent back. This became The Devil’s Own Luck, a murder mystery mixed with a salty sea story. The rest will, someday, be history.

So far, David has over 50 published novels (plus a couple that didn’t make it), adding up to over a million sales in all formats and is still hoping for the one book which will pull off the same trick. An Ex-Chair of the Society of Authors with two three-year terms, David feels sure publishing, or at least for those at the coal face, can be improved financially and it needs to be!

How would you describe your writing to someone new to it?

DD: It’s pretty eclectic, so they’d have to be patient. There’s a lot of naval fiction, given my first six novels were in that genre but with the aforesaid murder mystery. There’s also a diptych on the parallel lives of Nelson and Emma Hamilton and a trilogy on Republican Rome (no emperors). Three are based on the amazing true story of the Normans in Southern Italy (from impecunious mercenaries to rulers in 100 years) and another trilogy on Byzantium in the Sixth Century; three on the Crusades. The main output I’ll leave to the next question.

WO: Can you tell us a bit about your latest book HMS Hazard?

DD: This is book 16 in a series covering the adventures of John Pearce. The son of a radical political preacher, feared by the government, he is on the run from the law, taking refuge in a Thameside tavern, The Pelican. From there, he is illegally pressed into the navy by hardhorse Captain Ralph Barclay. Let go because he seems too troublesome (though, by his actions, he’s saved Barclay’s reputation), he and his companions are pressed again, this time legally, in the English Channel.

Serving on the next ship leads to a major sea battle and an act of such outstanding bravery, Pearce is personally promoted to lieutenant by King George, making him deeply unpopular in the wider navy. But, despite his many enemies, his particular skills fit him for tasks other officers would find hard to fulfil and he succeeds in the missions he’s given; often despite the palpable risks.

He has also stolen away Emily, the wife of Ralph Barclay and, between them, they have produced  (after Barclay’s death in action), a son, though the true paternity must be kept secret. In HMS Hazard, he comes under the command of Sir John Jervis, an admiral who hates his very name and is about to be given an impossible task, at which he is, hopefully, bound to fail. It is also, again, highly dangerous and life-threatening. I know where the next book, No. 17, is going to take place…

DD: I was once asked this question in a radio interview and my reply, flippant, I acknowledge, was: “Desperation. I’ve tried everything else.” But I’ve done a lot of things in my time, with lots of ups and downs. For example, I once had a job so well paid, I could stay in five-star London hotels. The next year, I was working as a chauffeur taking people to the very places I used to stay. I’ve had many jobs backstage in the London and Provincial theatre, run a pub, very profitably sold ice cream, and others too numerous to mention. It’s given me a huge bunch of characters to draw on and events to exploit. Also, I read voraciously.

Original inspiration came from an epiphany. I sat down to write a radio play, changed my mind and, to my surprise, as well as that of others, completed a 400-page novel in 30 days, based on the certainty in the Nelsonian navy that not all officers were brave or honest.

It was a mess typographically, but it was a hell of a story. Importantly, I finished it and was chuffed with the ending. Read subsequently, I enjoyed it and still do.

Now, I’d go mad if I wasn’t writing and besides, I just love the act of creation, with a strong dose of myth-busting thrown in. My problem is having more ideas than time allows for!

WO: The current issue of Write On! explores the theme ‘Writing With Wonder’ – creating stories to fuel the imagination. With that in mind, how do you weave wonder into your writing?

DD: In a very true sense, I write to please myself. If I’m not enjoying it, I don’t believe anyone else will and I don’t worry about approaching storylines or plot problems. I trust my imagination to get out of trouble and it’s only failed me once. So, I went back 30,000 words and changed course. Plot is not a problem anyway. It’s cause and effect: if that’s happened, this can happen, with the obvious possibility being the reverse.

DD: Write the book you want to read. No book appeals to the whole world. Your audience is the one who shares your taste. This one is personal: avoid metaphors, they’re padding.

WO: Question from Twitter user: @madeleinefwhite. If you could revisit your writing journey, are there any things you would do differently?

DD: Simple. I once made what I thought was a (good) joke to a senior publisher. He didn’t laugh. They generally don’t, having parked their sense of humour long ago. Pathetic gratitude is what they seek.

Also, check everything your agent does in areas such as contracts. Mine sent me two contracts for two separate books in one envelope. But they were for delivery on the same day –an impossible task. A secretarial error, very likely, but he didn’t spot it either, which means he didn’t look. Cue, furious publisher! Cost in terms of future earning, I mean both the above – immense. I do not exaggerate!

DD: The next novel is in production: a counterfactual thriller set in 1940 called Every Second Counts. What would have happened if we’d agreed to talks with Hitler, only to then find out our anti-invasion plans are in the hands of a murderous German agent and a Scottish fascist and we’ve got only days to get them back?

DD: Not fictional. A Scottish border collie. I had one as a young boy and he not only saved me from loneliness but was a pleasure to be with, roaming the Pentland Hills for days at a time.

You can find out more about David Donachie here: www.twofingersbooks.com

Write the book you want to read. No book appeals to the whole world. Your audience is the one who shares your taste. This one is personal: avoid metaphors, their padding.