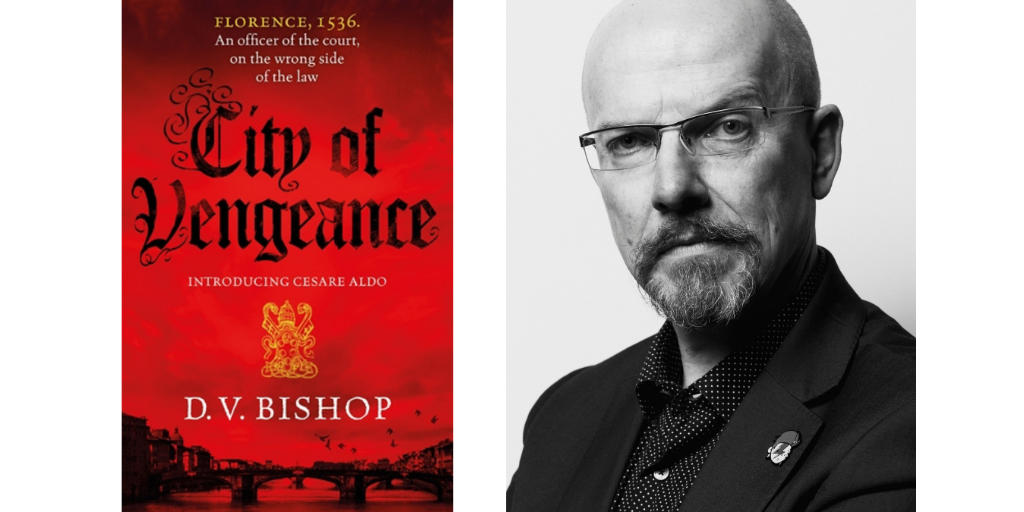 D. V. Bishop is an award-winning screenwriter and TV dramatist. His love for the city of Florence and the Renaissance period meant there could be only one setting for his crime fiction debut. City Of Vengeance is shortlisted for the 2021 Wilbur Smith Adventure Writing Prize and won the Pitch Perfect competition at Bloody Scotland 2018. Bishop was also awarded a Robert Louis Stevenson Fellowship by the Scottish Book Trust while writing the novel. When not busy being programme leader for creative writing at Edinburgh Napier University, he is planning his next research trip to Florence.

DVB: I write page-turning stories designed to make you care about the characters and desperate to know what happens next. I have written in a lot of different genres (science fiction, horror, fantasy, medical dramas), and for lots of different media: TV, radio, novels, comics, computer games, audio dramas, graphic novels. But almost everything I write has an element of mystery at its heart; a crime or puzzle driving the narrative. The other things you will find in my stories are characters with secrets, thwarted love, and pyrrhic victories.

WO: Can you tell us a bit about your book, City Of Vengeance?

DVB: City Of Vengeance is a historical thriller set in Renaissance Florence during the winter of 1536. It introduces Cesare Aldo, an officer for the most feared criminal court in the city. He enforces the law, but Aldo is also a gay man in a time and place where his sexuality makes him a criminal.

Aldo investigates the murder of a Jewish moneylender, a crime with great significance in a city that lives via commerce. But as Aldo gets close to the truth, he uncovers a plot to overthrow the Duke of Florence, Alessandro de’ Medici. If the Duke falls, the whole city will be in danger. Meanwhile, Aldo’s venal rival at the court is investigating Aldo, looking for the means to destroy. Can Aldo stop the conspiracy to overthrow the Duke before anyone else dies, or will Aldo’s own secrets destroy him first?

DVB: I was a voracious reader as a child. Growing up in New Zealand, we seemed to be so far away from the rest of the world. I loved how books and stories could transport me to other places, other worlds, and other times. That inspired me to start writing stories – imitations of other people’s books and characters at first, before I started inventing my own.

These days, there are two things that inspire me to write. One is discovering an obscure historical fact, or something that surprises me, that challenges the way I think about a time, a place, or an individual. City Of Vengeance was inspired by glancing at an academic monograph in a bookshop and reading that the criminal justice system in 1530s Renaissance Florence was roughly comparable to a modern police force. That lit up all the lightbulbs in my head at once! The other thing which inspires me is when a reader enjoys my work; that’s such a wonderful moment. It makes all the hard work and long, dark tea-times of the soul worthwhile to know someone, somewhere is reading your book and being transported into the story. That’s pure magic for me.

WO: The current issue of Write On! explores the theme of ‘Keeping Going!’  – creating with perseverance and courage.  With that in mind, what markers have defined your writing journey? Tell us about where you’ve had to dig deep to keep going.

AN: I always wanted to write my own stories but, growing up in New Zealand, there didn’t seem to be any way to be making a living from that. I became a daily newspaper reporter but found I was writing articles about what other people did, rather than creating my own story. So I emigrated to London with one suitcase and a dream: I would become a writer of fiction. Within two years, I was editing and writing comics. Within four years, my first novel was published. After ten years of juggling work as an editor with writing, I quit going freelance. I found plenty of work in science fiction and fantasy, but was writing other people’s characters: Doctor Who, Judge Dredd. I felt trapped, so decided to retrain as a screenwriter. I completed a Masters in Screenwriting at Edinburgh Napier University, which led to me writing plays for BBC Radio and episodes of the BBC TV drama series Doctors. I learned a lot from that, but I was still writing stories for other people’s characters. I stepped back again and decided to write the novel I’d wanted to for nearly 20 years: City Of Vengeance. So there have been many stops and starts, a lot of new beginnings and reinventions of myself as a writer. It can be scary to abandon what you know you can already do, to challenge yourself into trying a new approach or a new medium with no guarantee of any success. But if you keep doing what you’re doing, you will keep getting what you’re getting. Evolve to survive!

DVB: Don’t try to do too many different things at once. When you get a little bit of success, you can find yourself with offers and opportunities you never imagined might come your way. It’s very tempting to chase everything in every direction, but that usually means you make very little progress overall. Better to focus on a small number of core projects about which you are truly passionate, than to chase money and opportunities for the sake of it. You’ll be a happier writer – and probably a better writer – if you write what you do best, if you  write the stories you are most passionate about, and if you write what you love to read.

WO: Question from Twitter user @Grasshopper2407 – What is your writing Kryptonite?

DVB: Ironically, it’s probably Twitter – and the internet, in general. The temptation to go looking for distractions when you should be writing is so strong sometimes, especially when you are struggling with a particular sequence or you know it isn’t quite working yet. The worst Kryptonite of all is when I go online to find the answer to a research question and lose half an hour more. Then, just as I log off, I realise I never found the answer I was looking for in the first place! My solution is to do as much of the research as possible before I start drafting. If there’s something that comes up while writing, I type [RESEARCH] and carry on, so I’m not interrupting myself or being tempted online. In an absolute emergency, I use an app called ‘Freedom’ that blocks you from using the internet for a set amount of time.

DVB: I’m finishing final edits on the second Cesare Aldo novel, set three months after City Of Vengeance in Spring, 1537. Aldo investigates a report of intruders at a convent, but discovers the body of a naked man inside the convent’s scriptorium: dead, stabbed 27 times and covered in blood. Aldo must find the killer by Easter, or the convent will be shut down. Meanwhile, Constable Carlo Strocchi is investigating what happened in the final chapter of City Of Vengeance. I can’t tell you anything more just yet, but the working title for the novel was Nuns, Blood And Consequences…

DVB: Ohh, tricky question! My answer is Lockjaw, a giant bulldog that appears in a Marvel Comics series called The Inhumans. I’m choosing Lockjaw because he can teleport, which would be a great way to travel – no more airport queues, lost luggage, or long-haul torture! 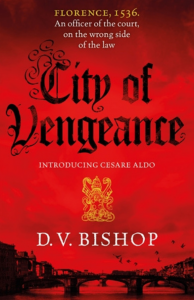 You can find out more about D. V. Bishop here: dvbishop.com/ and connect with them on Twitter: @davidbishop

City Of Vengeance is available to buy from linktr.ee/D.V.Bishop

It makes all the hard work and long, dark tea-times of the soul worthwhile to know someone, somewhere is reading your book and being transported into the story.