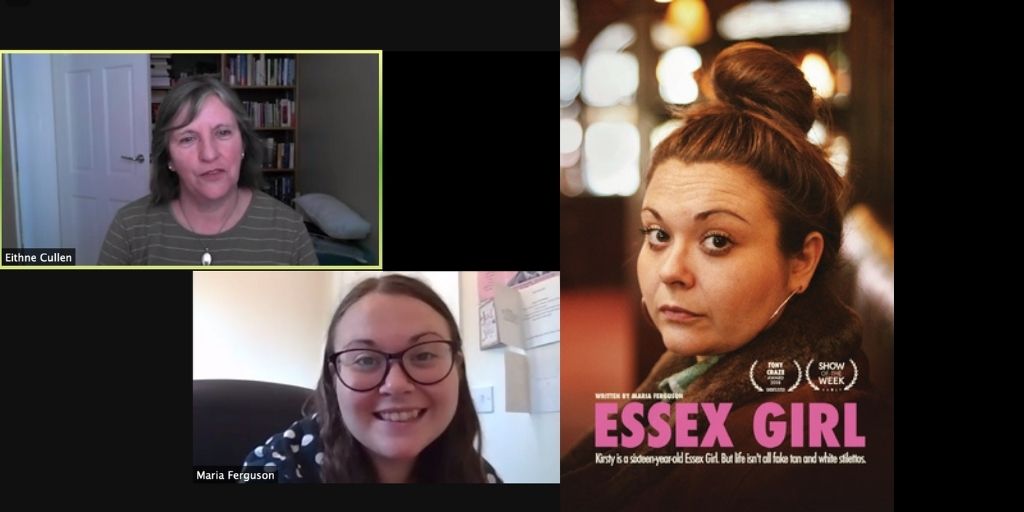 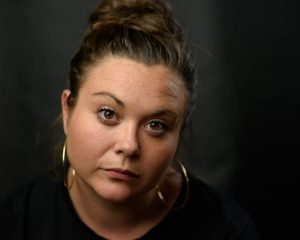 I first came across Maria Ferguson when I went to a reading of Fat Girls Don’t Dance. Since then, I listened to Alright, Girl? as an audio performance through The Living Words Festival and, for the second time, loved both the poetry and her arresting, authentic voice.

She’s a performer who went to drama school and was performing before she ever started writing. This gave her confidence with her work, although she still feels vulnerable when she presents her work on the page. Once it’s written down and captured in print, she no longer has control of it. To illustrate what she means, she refers to the way we enjoy a book, then see the film, and how different the experience can be. In performance, there’s no hidden conceit; a writer asks the reader to do the work.

I ask about her latest book. Maria explains it’s much more like a performance text than a book.

She took Fat Girls Don’t Dance to the Edinburgh Festival, performing it for 30 days. She tells me how, throughout the run, she was constantly aware that people could judge her, her body and her work. She feels live performance allows the artist to gauge what the audience is feeling and mentions a comedian she likes, who uses comedy to reference heavy issues. In this sense, she describes the way she uses comedy. For her, it’s not something to hide behind; instead, she sees it as a way of giving people the chance to “laugh and get into the issues.” She tells me: “I love work that is funny and challenging.” In this collection, there’s a lot to think about, including body image.

Maria’s poems are witty and engaging, dealing with all kinds of real and relevant issues and themes. She knows she’s writing in a world that’s changing. She’s “constantly questioning, learning, growing” and likes to “write about things that are important to help people… things that others can relate to; especially body image and our relationship with food. Everyone has a relationship with food, so to explore this is powerful and relatable.”

Fellow poet, Joelle Taylor, described Maria as: “A poet for the people, washing her dirty poems in public and holding your eye as she does so.”

We discuss the effect of talking about such personal, painful issues. Maria shares how, to her,  the best kind of art holds a mirror to the audience. In her case, she tells them about herself and asks them to react. She knows they will chat about it in the bar after the event.

Her latest work, Essex Girl, is published as a book but grew out of theatre performance. In fact, she was a winner at the 2018 Vaults Theatre Festival. I asked her about her own identity and whether, coming from Essex, she sees herself as an Essex woman. Her answer is a definite yes. However, she does remind me that Essex is a very large county, with lots of different identities and areas!

We go on to discuss the term Essex Girl, referenced in the dictionary with words that include: unintelligent, devoid of taste and promiscuous. “It’s no news that stereotypes exist,” she says, but when she saw this definition she was “intrigued and insulted to find that the dictionary where you go to find truthful information” deals us this stereotype, passing over any notion of heritage or working-class cultures. She sees her Essex Girl character as the “Brentwood girl with stigma.”

We move on to feminist issues. Maria tells me her work explores a number of things around this, including consent and men with power. However, fun, pie and mash and Irish pubs are also included! She sees her work as asking social questions, even down to: “Is my language acceptable?” Conscious that there’s a tendency to focus on negatives in a female narrative, Maria tells her tale in a straightforward way, all the while aware that women always seem to be apologising.

This leads me to ask about the way she writes. She says she began writing monologues, setting down her thoughts as a stream of consciousness. She went on to find rhythm and rhyme in her stories and so developed these elements, conscious of structure and the choices we make in writing and telling stories. Because she’d not studied literature formally, she went on a poetry writing course. She was surprised to find that what she saw as important was not the focus. In fact, it seemed to be “the lowest common denominator.” And this upset her. However, she shares how she persevered, determined to master the rules and form of poetry writing. She has since published poems that conform to poetic form rules: a sestina (Sestina Turner), a sonnet and a villanelle, for example. To her mind, if you want to break the rules, you need to learn them first, and this means challenging herself. When she adds that an academic space makes her even more aware of the conflict between writer and person, leading to her feeling like an imposter, this is a great opening to talk about something that dogs all writers: Imposter Syndrome.

This issue often comes up in Write On! magazine. She says: “Imposter syndrome affects every writer, especially the good ones!” She tells me how she’s constantly questioning herself: “Who am I writing it for? Who do I want to engage with?” At the heart of her answer is the knowledge that people she knows are able to access her work; her writing style making it easy for them to understand what she wants to convey. That in itself brings confidence; going beyond the formalities of what she learned on the poetry course. After years and years of crafting and putting out work, she is comfortable that she’s no longer “trying to impress other people.” Instead, she’s been able to take on the things she’s learned, while still writing her poems.

At the beginning of our conversation, Maria mentioned she was getting ready to go on holiday later that day, having got married during lockdown. By the time we get to the end of our hour, I’ve picked up enough clues to realise she’s off on her honeymoon – and that the answer to her question Alright, Girl? would be a most definite “Yes.”

Imposter syndrome affects every writer, especially the good ones!