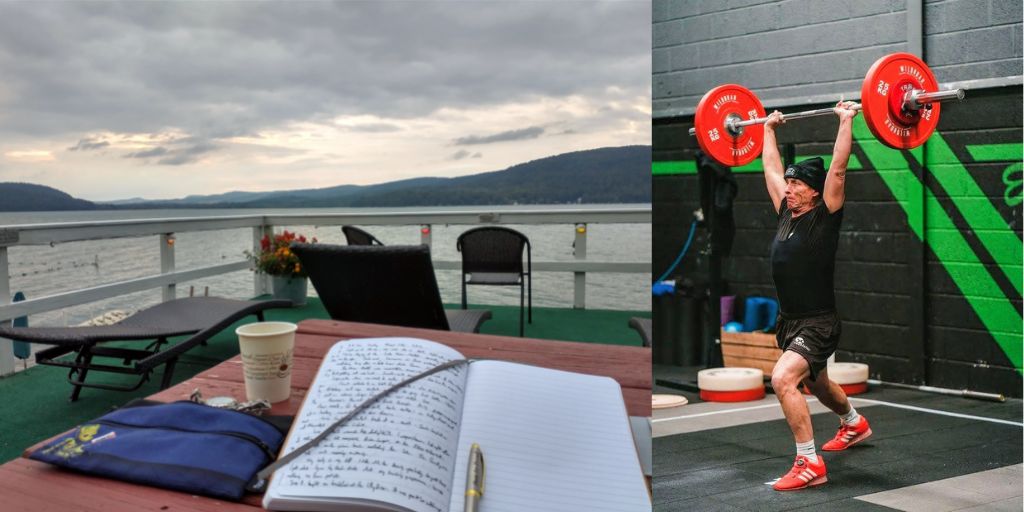 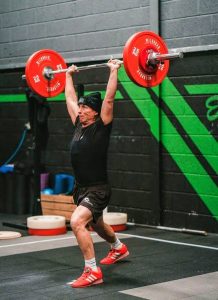 September’s Writer Of The Month is a man whose destiny intertwined with mine in 2021, when we attended Pen to Print’s Advanced Creative Writing Classes. You might have heard of him – he is the winner of Pen to Print’s Short Story Competition 2022, and has had many short stories published by Write On! Magazine. He is my fellow classmate and writer: James Marshall.

Growing up, James’s family lived in a variety of places, including the UAE and Somerset. It naturally follows that his stories reflect his experiences. For example, Henley Giant features the woods he observed from his classroom window, when he lived in Crewkerne, Somerset. (You can read this piece here: https://pentoprint.org/thoughtful-tuesdays-hodge-podge/.)

My favourite stories from James are the ones that touch on social commentary. Here is an example of James’s current work in progress:

Lena shuffles her damp feet and rubs her arms. Water has leaked into her patched shoes. Patches upon patches upon patches. She’s run out of black masking tape. Trevor, the supervisor, walks down the line handing out the little England flags to her colleagues lined up on the shaded pavement outside the warehouse.

The local news team shiver nearby; a thin lady with a sharp nose and coiffured blonde hair stands in front of a cameraman who has a sound boom extending from the shoulder harness of his portable rig.

Two electric motorcycles whine to a halt, followed by a black car. A short, grey-haired man steps out, his belly leading the way, suit jacket undone and blue tie hanging above his straining belt, an England badge pinned on his lapel: John Parrish, MP.

The factory manager shakes hands. Words are exchanged but Lena can’t hear them.

“Wave your flags,” Trevor says to the women.

Lena moves her arm fast as instructed. The paper flag falls off the stick and flutters into a puddle.

“I’m glad to open…” Words carry on the breeze.

The news lady collars Parrish, “A joyous occasion, here in Plymouth, as our MP opens the new flag factory.”

“It’s fantastic to be able to create new jobs and employ local people. Manufacturing is vital in this great country of ours.” Parrish smiles.

The cameraman scans the line of workers and pauses at Lena. She blushes and fiddles with the flag and stick.

The entourage moves inside the warehouse.

Lena leads the way up the hill to the office, crossing the street to walk in the crisp sunshine, hoping to dry her toes out. Her stomach rumbles. Two hours until lunchtime. An apple and cheese again. It must be Tuesday.

James works as a sports coach, so it makes complete sense that his stories would reflect his love of physical activities, like the next piece:

Four elderly ladies in spotless white uniforms shuffled towards the elevated bowling green. They carried long, cool drinks with straws curled over the top. Three men sat around a picnic table: two empty crisp packets, four fag ends in a metal ashtray, car keys, phones and a blue plastic beaker lay across the dry wood. Children crawled on the grass around them, oblivious to the cricket match being played on the pristine grass. Jet entrails cut across the clear sky above the Blackdown Hills.

“This cut on my leg looks like an old lady’s vagina.” Dave showed his calf to his pals.

“You would know,” Scott said.

“I might make use of it later,” Rob grabbed his crotch.

“Dad, can you play football with me?” A tousled-haired boy held up the ball that was bigger than his head.

“You promised,” the boy said.

“Your old man isn’t the player he was,” Rob jabbed a finger at Scott. “He used to have some skills.”

Scott drained his beer. “Fuck off. I’ll show you some skills.” He grabbed the ball and dribbled around his son. He balanced the orange ball on his trainer and did a round-the-world, 15 keepie-uppies, and a rainbow flick. “See.” Scott nudged the ball to his son, who stopped it with his hands.

“You’ve got to use your feet,” Scott said.

“Go on boy, you can do it,” Dave said. He slapped the table in a drum roll.

The boy ran forward, swung his right leg at the ball, missed, and fell on the grass.

The boy stood up and wiped his eyes.

Dave drained his beer. “Your round, Scott.”

James’s love of sports continues in this next piece, taken from his historical fantasy novel:

The sprinters surge forward, a blur of pumping arms and legs. I get pushed forward as the crowd moves onto the track, necks straining to see what the runners are doing at the far end. I can’t be sure, but it looks like Eadan won. Cuirealan’s black mop was bobbing at the back.

I’m glad I didn’t enter this race, it’s too close. I need to save my energy for the longer one.

Eadan is quiet but I know he is pleased. Or relieved he hasn’t lost.  At least we won’t have to put up with his grouchy mood later. Unless I beat him in our race.

Two more races pass and then we are called up. I need to pee again; how is that possible? There is nowhere to go. Murchadh gives us the instructions and all I can think about is completing the race without wetting myself.

I am jostled to the edge of the line. There are a dozen of us and I am the only girl.

Sand is kicked up into my eye as the boys sprint forward. They are so fast. Don’t they know it’s an endurance race? I am at the back before I get halfway down the first length.

“Get up there, Fedlimid!” Father’s voice reaches me through the cacophony of cheering.

I spit out sand and turn my legs over faster, angling my way to the sea where the sand is firmer. The first boy has already reached the marker. Eadan. He is looking over his shoulder as he starts his second length. Five other boys are close behind him. I get to the first pole and turn right. The sand is a mess and my pace is slowed. Go wider. The boy in front stumbles and I go past him on the smoother sand. One down, ten to go.

I clear the corner and see that the leaders are half a length ahead. My chest is screaming as I suck in the air. I try to get into a rhythm, pushing a little harder and taking longer strides. I pass a boy who has slowed to a walk. Eadan is at the second marker, already. The wide path on the harder sand pays off as I pass another boy just before the halfway point.

There’s a pack of three stragglers who are paying for their initial sprint. I pass them after the turn. My breathing is fast but less painful; I have my wind now. I pick off another two boys on this length. The final turn is a mess, the other boys have waded through the sand and slowed down. I take an even wider turn, past a boy, leaving Eadan and three others ahead.

I can do this. Think of all the times you have run up the hill to Dee. I angle to the sea again around the two boys in front. Push, push, push. I feel like I am floating above the sand. Eadan looks over his shoulder, his face is contorted with effort, he stumbles and I make up a couple of yards. The boy next to him nudges in front.

The crowd is cheering as we near the finish.

I am level with the other two now, less than a stone’s throw from the finish. I’m going to win this. Murchadh has his hand raised, the sun is gleaming off his bald head. Yes!

I see a shape in the corner of my eye. It’s Felix. He jumps up at me and I trip and roll over into the sand. The other boys cross the line. I crawl over the line and collapse, chest heaving. Felix leans down and licks my salty face. His breath is hot and smells of stale meat. I try to push him off but my arms are as limp as seaweed.

Eadan crawls over on his hands and knees.

“You should have won that,”  he says.

“That boy from Looe did and now we have to hear about it all evening.” He sucks in some air.

Father blocks out the sun and the shade is welcome. He offers me his arm to stand up.

“Sorry, Fedlimid. That was my fault. I was so busy cheering you on that I forgot about Felix. Are you well?”

Father’s eyes are gleaming, “You are a fine athlete, daughter.” He squeezes me close.

“I can’t breathe, Father,” My voice is muffled in his chest.

Sadly, our word limit only permits the sharing of one more piece:

What Happened To You?

“What happened to you?” I say.

Elaine’s curly black hair hangs around her shoulders, water dripping onto the black and white tiled lobby floor.  She looks up at me, mascara running like Alice Cooper, “I got caught in the storm without an umbrella.”

“Come on up.” I beckon from behind the railings.

I’ve lived in Venice Beach for ten years. The neighbourhood changes but my neighbours stay the same. No one wants to leave this rent-controlled building with its lobby piano and palm tree surrounded pool.  In the 1930s they knew how to build for comfort and design rather than maximising square footage.

I hold the door for my bedraggled friend and confidant.

“Thanks,” she says and walks past, smelling of coconut shampoo and damp.

Elaine drips her way into the living room and takes off her black coat. I swap it for a warm bath towel.

Elaine scrubs her hair from ends to roots and ties the towel into a turban. I hand her a red hoody with USC Trojans written in yellow print. I tap my eyelid: “Mascara.”

“Ugh. I’ll sort that out.” She puts on the hoody. It hangs halfway to her knees.

“Coffee?” I hold up my ceramic mug.

The sky flashes, thunder rolls around the building, rain lashes against the windows. We aren’t used to this, at least, not in the winter. Summer storms brew up but the rain is warm and short-lived. This is cold. I’m wearing a three-day beard and a flannel shirt to keep warm.

We’ve reached the end of this page, but (hopefully) not the end of James’s writing journey. Feel free to keep up with him 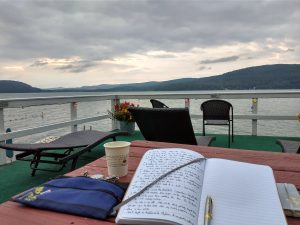 Publications by Write On!: https://pentoprint.org/?s=james+marshall

Growing up, James’s family lived in a variety of places. It naturally follows that his stories reflect his experiences.