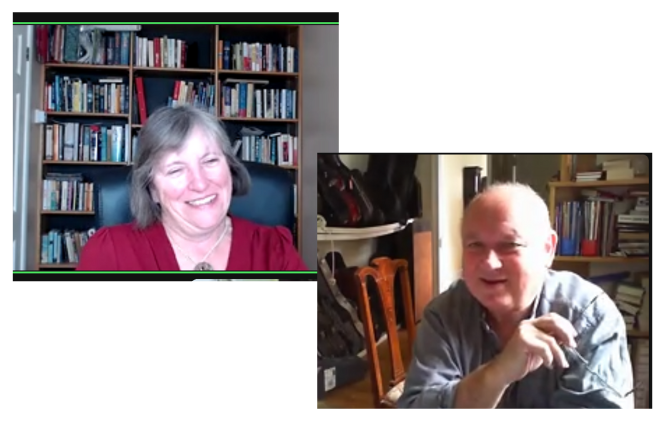 Eithne Cullen finds out how it might just be possible to be good at everything.

“We love that book!” The general, excited response on telling people I’m going to be interviewing Louis de Bernières. Of course, we all do, but as I find out when we meet on Zoom, one sweltering day in July, there is so much more to him than Captain Corelli’s Mandolin.

Louis contextualises his achievements as an accomplished musician, poet and lyricist and prolific novelist, with a conspiratorial grin, sharing that the British “are suspicious of anyone who’s good at more than one thing.” I love that, despite this, he chooses to continue on his own merry path. This initial comment sets the tone, and I decide his travels are a good a place to start.

To reflect our ‘Worlds Apart theme, I begin by asking him ‘where in the world’ he is. In Norfolk, as it turns out. But an army childhood has given a taste for far-flung places. At eight weeks, he was in a tent in Jordan, later moving to Cyprus and eventually settling in Surrey, which is now where he tells people he comes from. He still sees himself as a world traveller, finding stories in Turkey, Sri Lanka, Australia, Peshawar, Canada, South America and more.

I ask about his first fictional work, a trilogy set in South America. Louis tells me it came about after he’d messed up his attempt at a military career and age 19, went to live on a Colombian ranch. (Incidentally, his father told him at the time he’d be a failure all his life.)

He taught the family’s children in the morning and worked on the ranch in the afternoon. He had horses and tells me he knows how to lasso things. This lassoing image is a perfect for describing how he captures stories wherever he goes and finds homes for them in his books. His love for Colombia shines through with his joyous description of avocados “the size of rugby balls.”

Returning to study at Manchester was a hard transition and his sister recommended he read One Hundred Years Of Solitude by Gabriel García Márquez to help him. He did, proceeding to immerse himself in South American novels for the next ten years. A motorcycle crash which saw him in plaster for six months also played an important part in writing the first novel of the trilogy. Louis expands:

“My theory is that you get out what you put in; a bit like computers, you get the same stuff out, but metamorphosed. That’s what happened, a period of enforced inactivity and all my reading and memories of Colombia came pouring back out.”

This ‘how’ leads us into a deeper process of why: “My main mission is to find good stories. Really, I’m just a story collector.”

We move on to talk about another of his loves, history. His passion for the subject came from his father and an inspiring teacher who told stories from his own experience:

“What actually happened is usually far more interesting than the things we make up. History should consist of the anecdotes of the little people.”

Was he surprised by the success of Captain Corelli’s Mandolin? As a writer, I’m heartened by his response. He calls it a ‘word of mouth’ book, its success building over a period of four years. He hadn’t been aware of the extent of its appeal until he went to Waterloo Station and found a whole shop with nothing else in it!

He shares some of the aftermath as well:

“Artistically speaking it was nerve wracking having everybody expecting me to write the same thing again but ‘totally different’. Captain Corelli was my original attempt to have a go at War And Peace. To me, a later novel, Birds Without Wings, about the Ottoman empire, is a better book. Having said that, I’m very proud of Captain Corelli’s Mandolin and when I read it now, I can’t believe I had the ingenuity and energy to do that. But to me, the most striking thing is that it’s full of light. I haven’t been able to capture that light again.”

There is a momentary silence. Maybe we’re both reflecting on the power of that creative light.

Swiftly, though, our conversation gathers momentum again, sweeping past that moment onto the historic perspective. Louis shares that most people outside of Greece don’t have a clue about what happened there:

“It’s actually very interesting and at times very bloody and tragic. I pivoted this around a Romeo and Juliet story. Replace the Montagues and Capulets with Italians and Greek and you get the idea. Like Shakespeare’s ‘tribes’ the Greeks and the Italians share a common cultural heritage. The Ionian Islands had been Venetian at one time, leading to similarities in language and even food.”

He tells me the idea that love conquers all came into the story, because what brought those people together in the end was the massacre of the Italian soldiers, a shared experience. The people who’d arrived as conquerors ended up being given sanctuary by the conquered.

I’m a poet, so this is where we move to next. I discover that poetry is probably a bigger part of his writing life than prose. His poetry was sidelined early on in his career by an agent who couldn’t see a commercial potential. But a decade or so ago, he made a point of studying poetry to develop a stronger technical grasp of the genre and his poetry took off again:

“My poems are often stories. They’re usually quite emotional. I always know if a poem’s any good because the audience sighs at the end.”

He kindly suggests that I must know the feeling, being a poet myself. I do, but am sure he’s heard that sigh more than I have!

I ask about his love of music. Louis tells me about his mother, who was a natural pianist and introduced him to classical music. When he was younger, he also admired singer-songwriters like Paul Simon and Tom Paxton, thinking that playing the guitar might help him get a girlfriend. These days, he loves all kinds of music: ragtime, baroque, traditional and world music and can play several instruments. He tells me about writing lyrics, and how poetry has helped him. Though the disciplines are different, he shows a deep understanding of the form and is currently recording songs he has written over 20 years to leave something behind for his children.

At this point, Basil, the musical cat, appears on the screen. Apparently, the other cats ignore Louis when he plays, but Basil has a keen ear.

Louis blithely carries on, telling me he is proud of the fact he can play anything he wants to play:

“I used to play lots of different instruments, but I cut it down. You can’t be good at everything all at once!”

When he owns up to being ‘not so good’ at languages: “Only French, German with a good Spanish accent, plus fairly minimal Greek and Turkish,” I begin to think Louis might be the exception to the rule of it being impossible to be good at everything.

“You are your own worst editor. Always get someone else to do it. Your character Charlie may very well evolve into Chris later on in the book and you won’t even notice!”

I want to know if it’s possible to draw inspiration from his characters, particularly in these times of conflict and uncertainty. His answer doesn’t surprise me:

“My favourite character is Dr Iannis from Captain Corelli’s Mandolin. He’s very wise and understands history as well as the emotions. His advice to his daughter is the sort of advice I would like to give to mine… about the nature of love and so on. He understands the heart.”

We start talking about his next project and how he’s horrified his publisher by moving from historical novels to one set in the future:

“I’m exploring quantum cryptography: the world of code makers and code breakers using computers that work on the concept of sub atomic physics to break codes. There will be a time when no codes are safe and anyone with sufficient malice to do so could plunge us back into the Middle Ages.”

He’s written about a character who sees this coming and buys a ruined farmhouse as far from the city as he can get on Bodmin Moor, to ensure his family’s survival.

His agent sent it to the publisher, saying: This is a bit weird and mad, but I think you’ll like it. A fitting epigram to the interview and a good place to end. We leave Louis with a contented Basil on his lap, who is licking himself shamelessly.

You are your own worst editor. Always get someone else to do it. Your character Charlie may very well evolve into Chris later on in the book and you won’t even notice!