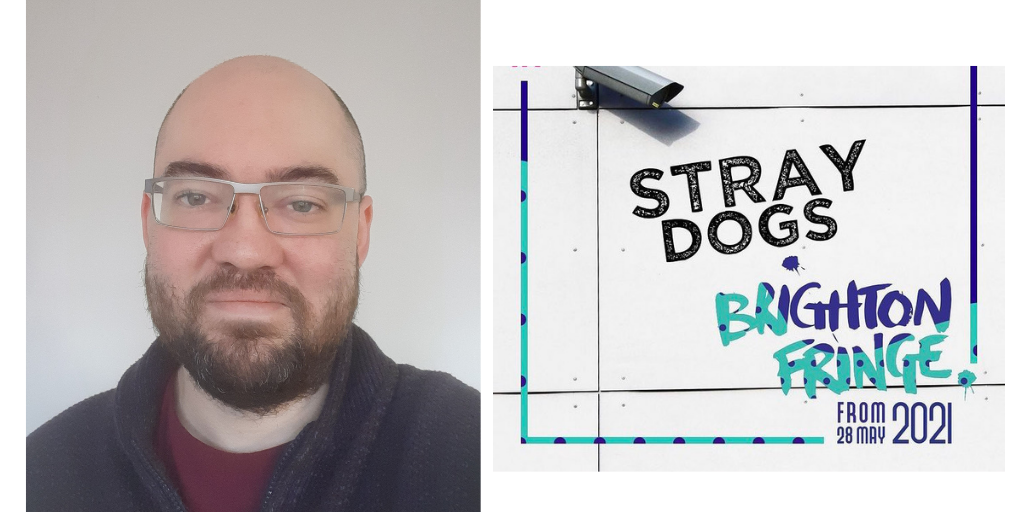 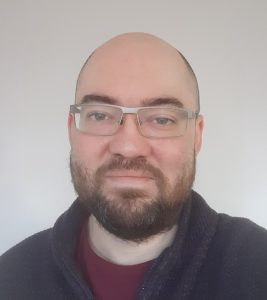 Our writer of the month, Matt Wixey, lives in Redbridge and works in the field of cyber security. He started writing in 2018 and at first glance, Matt’s success might be classed as ‘overnight.’ In 2019, he won the Hammond House International Literary Competition in both the short story and screenwriting categories and in 2020 was longlisted for Channel 4’s 4 Screenwriting scheme and selected for the London Library Emerging Writers Programme.

In 2021, Matt’s debut full-length play, Stray Dogs (about police culture and partly based on his time working in the police) was produced at the Brighton Fringe and the Bread And Roses Theatre in London. He’s also had several short stories published in anthologies, and various short plays performed.

He is a previous Pen to Print Short Story Contest winner and Playwriting finalist (2018/19), and a current contestant in the Pen to Print Book Challenge. Matt is studying for a PhD on cyberweapons and cyber warfare, a subject which feeds into some of his writing, including his Book Challenge novel about hacking.

However, although he wrote in his teens, after graduating from university, Matt stopped. He lacked the confidence to share his writing, was busy building a career in the police and a subsequent move to the technical side of cyber security, meant devoting a considerable amount of time to studying.

Matt explains what triggered his return to writing. “In 2018, I found myself thinking about writing quite a lot, and a cyber security conference I attended was running a short story contest, so after a lot of false starts I submitted a story (under a pseudonym) and it won first prize. Since then, I’ve had more success with plays and screenplays, neither of which I’d tried to write before 2018.”

The following extract from his short story Plus One illustrates Matt’s talent for dialogue and shows why he’s had success with plays and screenwriting.

They have a microwaved paella that evening and the clock ticks slower than usual.

“That was good,” Amanda says.

“Tasty, isn’t it?” he says, studying the cardboard sleeve which he has brought with him to the table. “And it’s in the microwave for the whole time; you don’t even have to stir it halfway through. Much easier.”

“Bit more expensive, Taste The Difference, but you really do –”

Amanda refills her glass. The wind sighs outside. The streetlights come on. The slender bones of an overgrowing rose bush are projected across the blinds.

“Did I tell you about Toby? At work?”

“If it’s about his hernia, then yes, you did. Extensively.”

Gordon smiles his knowing smile. There had once been mystery in that smile. She could have sworn it. Like he knew some deep secret. She knows now that this is not what it means.

“No, that’s Brian, remember? This is Toby, in Finance. He just got a rescue cat.”

“But it’s deaf, he says. Yells its name for ages when it’s time for dinner. ‘Max! Max!’ And the damn thing never pays any attention.”

“I’m sure that’s occurred to him, Amanda.”

“Do you think we’re running out of things to say?”

Gordon turns his attention once more to the paella packaging. Among the autumnal colours and nutritional information tables is a monochrome sketch of a rustic Spanish kitchen. Wooden tabletops and vegetables hanging in dusty sunlight.

“Of course he knows the cat’s name,” he says.

“If it wasn’t for Toby’s cat and Brian’s hernia, what would we talk about?”

Amanda lets the tines of her fork sink into a prawn, pushing until the body yields and the prongs puncture firm cooked flesh. She wonders what it would be like to spear a live prawn in this way; whether the resistance would be the same, or looser, somehow.

“Well, things that happen. All sorts. When I came back from the supermarché. Remember? That car that cut me up.”

Perhaps prawns are armoured, she thinks, with some sort of carapace. She dimly remembers what they look like in the water, in the wild. Many legs and insectile heads and strange alien curves of antennae.

“It was filthy as well,” Gordon says. “Dried mud in the tyre treads. Needed a good hose down. It was a –”

“A Nissan Micra,” Amanda says, laying her fork down.

“And you agreed with me! You said ‘people just don’t care anymore’.”

Gordon stands up with a scrape of his chair and Amanda recognises the set of his shoulders, slumped but still squared. Not surrender, entirely, just a refusal to fight.

“Dessert?” he says. “I got some of those mini cheesecake things. They were on offer.”

He picks up the plates. On Amanda’s, the prawn remains fixed on the fork, the points of the tines visible through the surface of its pink skin as a row of four dark spots.

Gordon leaves the room and from the kitchen, she hears him open the fridge.

“And they come with those little glass ramekins,” he calls, loud. “We can use them for sauces and suchlike.”

The crackle of plastic as he struggles to open the packet.

“They’re not very big. It’s those lemon ones. You used to like them.”

Amanda goes into the kitchen. Gordon is standing in front of the fridge. Thin ropes of muscle writhe in his arms as he tries to open the packaging. She reaches for his shoulder, then stops herself. Perhaps her fingers would pierce right through his skin with barely any pressure.

“I’m trying to open the mini cheesecakes, darling. Honestly, what do they make these things of?”

“Gordon, please just look at me.”

He turns and shuts the fridge door. On its clinical white surface are bright and colourful magnets, little painted landscape reliefs of places. Malta. Copenhagen. Venice. The magnets are scattered sparsely over the door to disguise the spaces between where photographs should be.

Amanda takes a breath and attacks.

“I want to have a dinner party.”

Gordon nods, looks at the cheesecakes, and then back at her, eyes wide with alarm.

In Matt’s poem, A Song of Al-Anon, I was struck how the layout reflects the descent of the alcoholic.

A Song Of Al-Anon

This is my daddy’s song, the song I sing for him

Mum, daddy’s been sick in the sink again

daddy’s on the brink, and daddy can’t think

When the whisky and the gin begin to wink at him

That the booze sings to him; a loser’s hymn

Once a foolish whim, a youthful fling, the usual thing

Beautiful music that soothes and ruins him

A ruthless truth within: flesh is weak, spirits so strong

And the tune doesn’t cease, goes on and on and on

Surprisingly, considering his output, Matt describes himself as having always been a procrastinator. During his school days, he’d leave a homework assignment, not to the night before, but to the crack of dawn on the morning it was due.

He still puts off the inevitable and has researched why. “A theory goes that we writers live in our heads, where our ideas are shining and flawless.” He carries on:“Writing is hard, and hard things are hard to do. So, instead, we do easy things, which are easy to do. It’s an odd way to think of a pastime we love, but I do think there’s a grain of truth there. It’s possible to need to write, to long to write and to love doing it, but also to dread it.”

He adds, “My personal theory is that procrastination is thrust upon us, especially nowadays. Our attention spans and critical faculties are rapidly disintegrating in the face of news digests and social media dopamine hits and miniature gobbets of information.”

I think we can all relate to the distractions of social media, which Matt attempts to block using apps. However, in a previous job as an ‘ethical hacker,’ he knew how to find ‘security flaws’ in the software!

In a précised extract from a piece of writing for the Friday Features page in March, Matt finds an answer to the problem:

“If any of this is ringing an uncomfortable bell, I have a solution. Actually, I have 15.
Typewriters.
Yes, typewriters.
Typewriters are a genuine answer to the distraction problem, and here’s why.
Computers are great for writers. They’re fast, efficient and accessible. They’re brilliant for planning, outlining, editing and posting #amwriting on Twitter. But they really, really suck for writing messy, raw, rough drafts, and that’s what matters when you’re trying to turn that secret gem of an idea into something that doesn’t make you want to curl up and cry at your own paralysing inadequacy.
Their keyboards are flimsy. Their screens glare. They’re impersonal, abstract machines, with distractions built-in by design. Editing is too easy; the Backspace and Delete keys taunt you, tempting you to fix typos rather than progressing.

My typewriter revelation came in 2019 when I was writing a play set in the 1930s. I thought it would be a wheeze to draft it on a period typewriter, so, knowing absolutely nothing about them, I bought one for £80 on eBay. I got lucky; it was a gorgeous 1935 Corona flat-top with glass keys and a glossy black body, like a miniature piano. I did some research on how to clean it and install a new ribbon and started writing.
My word count tripled.
I’m now addicted. In the past 18 months, I’ve bought another 14 (if you think that sounds like a lot, Tom Hanks has 200, although he probably has more storage space than me). The cheapest was five pounds. The dates of manufacture range from 1915 to the late 1960s. Most are in perfect working order. And, best of all, they stop me from procrastinating.
Because typewriters are designed to write. Every lever, gear and spring is arranged in precise interdependent mechanical ingenuity to achieve this one aim. There is literally nothing else to do on them. You find yourself drawn to typing, because the thing’s there, tangible, right in front of you. And then you find yourself, minutes later, still typing, in a blissful stupor of creativity.
They’re beautiful, too, and there’s an alluring sense of history about them. They smell of age, like old books. They’ve been around longer than I have. They’ll be here after I’m not. I have no idea who owned them, or what was typed on them; that mystery gives them character, and I like knowing that I’m part of that legacy, as they’ll hopefully be part of mine.”

Thank you, Matt, for sharing your varied and entertaining writing.

You can explore some of Matt’s creative writing here: 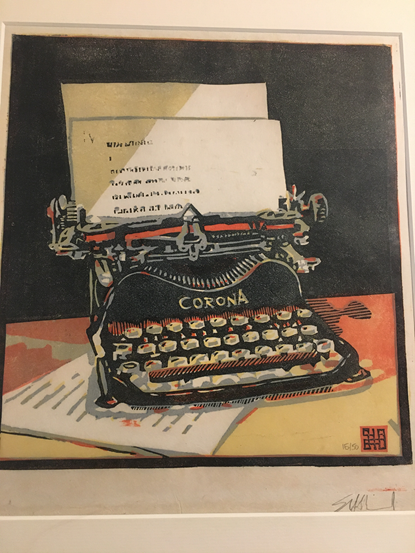 "My personal theory is that procrastination is thrust upon us, especially nowadays. Our attention spans and critical faculties are rapidly disintegrating in the face of news digests and social media dopamine hits and miniature gobbets of information."