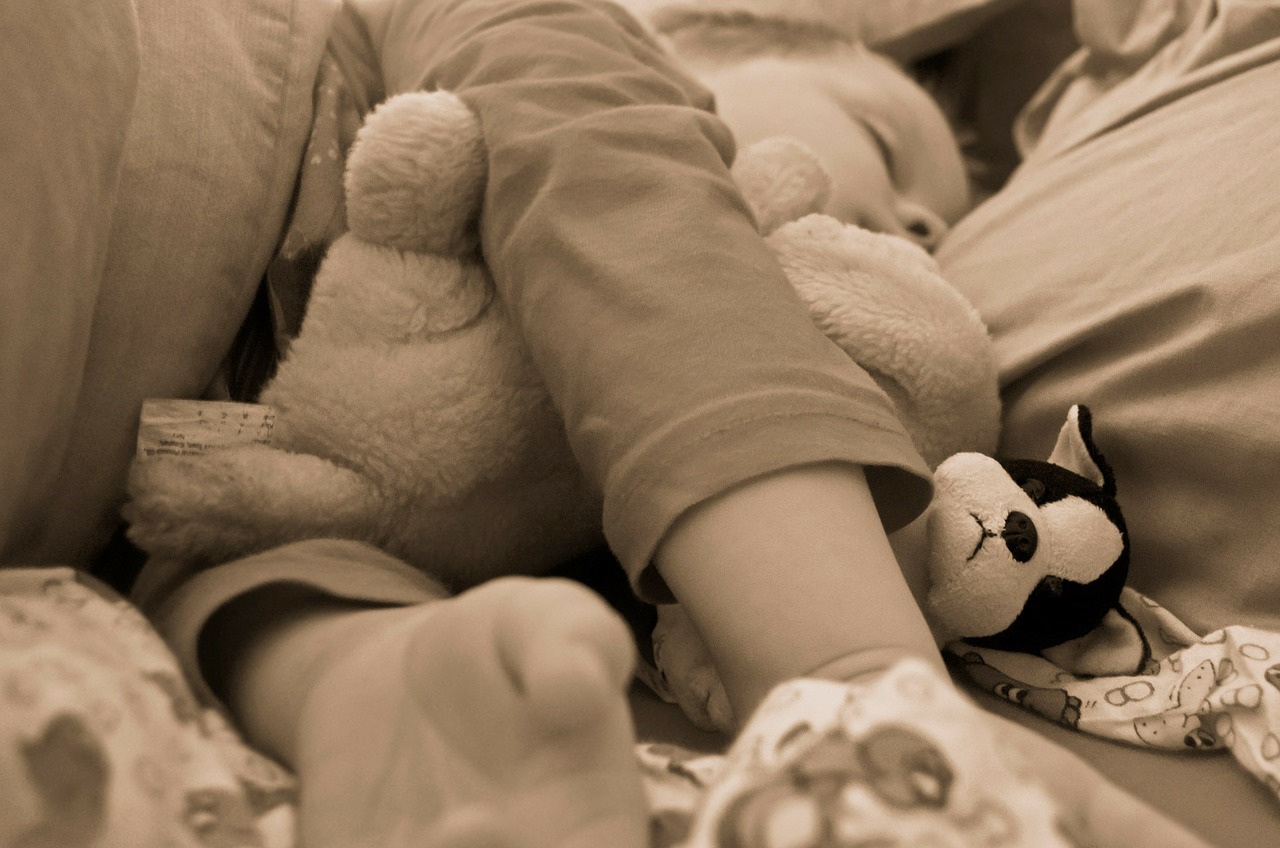 The window of Michael’s bedroom looks out on to the ragged little back garden. In the winter when the leaves die he can see for miles through the trees. He can see the sky and bitter stars and the road at the rear of the house that leads into town. He can see his father’s old car crawling up the hill and so he knows when to hide.

But tonight is different.

First, Michael hears the leaden dreaded tread on the stairs just like always, his father’s big heavy boots pounding on the ratty carpet. Second, Michael ducks under the covers.

But the thing that always happens next does not happen. Instead, Michael’s father opens the bedroom door and in a loud, cheerful voice he says:

The light from the landing spills golden into the dark room and Michael peeks out. He looks for the signs but he doesn’t see them.

Michael remembers the last bedtime story only vaguely. Perhaps he was four, or maybe five. Tomorrow, he is seven.

Michael’s father sits down at the end of the bed with a tired sigh. The mattress springs creak and whine. “What sort of story?”

His father’s voice is clear and his eyes glitter, filmless and focused. He is awake. He smells of wood and smoke. He doesn’t usually smell like that. He is different.

Michael does not want to ask for too much, not on a night already so different, but he can’t resist. Even if it breaks the spell, he has to ask. He gathers his courage.

Michael’s father sighs again. The sound is soft and dry, like leaves. His father is not angry, or upset, Michael understands. He is sad.

“There’s books up there, Mikey,” his father says, peering up at the shelves which hold a row of tattered shapes, as though he has never seen them before. There are fairy tales and books about oceans and space and jungles. “I can read you one of those.”

Michael’s father moves down the bed, towards Michael. He drops a weighty, loose arm around Michael’s shoulders in the old familiar way and takes a deep breath. Shudders, and something loosens in his throat.

Michael, glancing carefully, searches his father’s face. There is only a steady, patient calm, no trace of anything else.

“Greece? It’s old. Very old. People have lived there for thousands of years. In some places you can still see the buildings where the people used to live, and you can walk around and imagine what it was like.”

“Did you get there on a boat?”

“A plane, Mikey. A big plane in the sky with lots of people on it. And when we arrived, we got to our hotel — you know what a hotel is?”

“It’s a building where people stay, but it’s not their home. It’s just while they’re away.”

“It was a lovely hotel. It was very, very old. At least a hundred years old, I think. Most buildings are made of bricks. Like our house. But this one was all crumbly stone and wood. We went inside and we put our bags down, and a boy — older than you, maybe fifteen years old — walked past. I wasn’t really paying attention but your mother said he had bright green eyes. The boy walked past and smiled at her and your mother screamed.”

“Did she see something scary?” Michael says. He sits up slightly. The movement makes the bruises sing but he doesn’t notice.

“She said she did. She said she saw something bad in the boy’s head. And she said we had to leave.”

“How did she know that?” Michael says. His eyes are wide.

Michael’s father pauses. He stares out of the window as though expecting to see something there. But it’s black, and blank, just the trees nodding back and forth, and he looks down at Michael instead.

“She could do things like that,” he says. “Not all the time, and not always right, not exactly, but she could. Her little flashes, she used to say. She was very special.”

“Did you leave the hotel?”

“I didn’t want to. We’d already paid them some money, a lot of money. But your mother insisted.” Michael’s father smiles. “She could get so angry. She scared me sometimes. She knew she’d seen something and that was that. So we left.”

The trees outside moan in the wind.

“And that night,” Michael’s father continues, “that boy with the bright green eyes started a fire in the hotel. A big, big fire. And because it was so old, and there was so much wood, it burnt right away. It burned right through until the morning. Lots of people…lots of people were hurt.”

“Why did he start the fire?”

“But you and Mum left, and you were safe.”

“What happened to the boy?”

“No. Like I said, your mother –” Michael’s father starts to say, and then stops, abruptly. Sharp. “He died later. In an accident.”

Michael knows that tone and he knows he should not ask any more. There is a brief, warm silence. His father breathes deeply.

“I said not tonight.”

There is silence again. It cracks, cold, like snapping ice.

After a while, Michael’s father makes a sound in his throat and says: “She died when you were born, Mikey. On your birthday.”

Michael thinks about this and in the quiet hush it’s a while before he realises his father is crying. He has never seen his father cry.

“I’m sorry, Michael,” his father whispers. The words slur. “For everything. It wasn’t supposed to be like this. I’m so sorry.”

Michael does not know what to say.

Michael feels the fizz of tears swelling in his eyes. He cries too.

“I promise,” his father says. He swallows. “It’s your birthday tomorrow, Mikey. We don’t — not usually, because — but tomorrow, maybe? Your birthday.”

“I didn’t get a cake. Maybe I can get one, tomorrow. And a card. And some balloons.” He smiles and it trembles on his face. He wipes away the boy’s tears and holds him to his chest and they lie like that for some time.

Michael wakes up a few hours later. The room is still. His father breathes slow and steady beside him.

There’s a dull thud from downstairs. Michael sits up.

“Dad?” he whispers. He is afraid. “Dad?” He shakes his father and reaches up for the bedside light.

In the sudden brightness, squinting, Michael looks at his father and sees he is not sleeping, but wide awake.

But not. Not really. Michael’s father glares blankly up at the ceiling. His face is slack, his mouth open. Drool drips steadily from his mouth on to the bed in soft wet clicks.

There’s another dull thud from downstairs, and a petulant, furious scream shivers through the floors.

“Michael! I’m coming up there!”

Michael looks at the thing on the bed. Some sort of life comes back into its eyes, and it stirs.

The thing that is not Michael’s father shakes its head, its gaze fixed on Michael.

The thing that is not Michael’s father shakes its head again.

Now, with the light on, Michael can see that everything is wrong about the thing on the bed. It doesn’t really look like his father anymore. Its arms are too thin, its neck too long. Its face is blurred. It looks like a bad drawing of a man. A clay model. He can smell its breath. It smells like meat.

A thought comes to him. A flare in the blackness.

The thing that is not Michael’s father nods its head slowly.

Michael hears the tread on the stairs. Just like always. Big heavy boots.

The thing that is not Michael’s father shakes its head. It puts its hands over its face, covering its eyes.

“But I can see you. Because I’m special too. Like Mum.”

The thing that is not Michael’s father nods again, its head drooping like a snapped neck. For a second its eyes flash a bright and beautiful green, almost too intense to be real. Like plastic grass.

“Will you hurt him?”

The thing that is not Michael’s father seems to think about this. It speaks. Its voice is muddy and its mouth too wide. Behind the wet and shiny lips are the teeth of sharks.

Michael stands up and closes the bedroom door.

The footsteps on the stairs grow louder and the battered wooden landing groans.

“Michael!” his father says from outside the door. There’s another sound. A soft clinking, like a belt buckle.

The thing that is not Michael’s father nods again and puts a finger to its lips. It gets up from the bed in shambling, rolling movements. It steps back against the wall into the shadows and gradually it fades away until it disappears altogether.

Michael is not worried. He knows it is still there.

He jumps back into his bed and hides underneath the covers once more. He waits.

When the bedroom door finally opens he smiles in the dark.

In that moment – there - in South Hams
Our week turns to one last day.