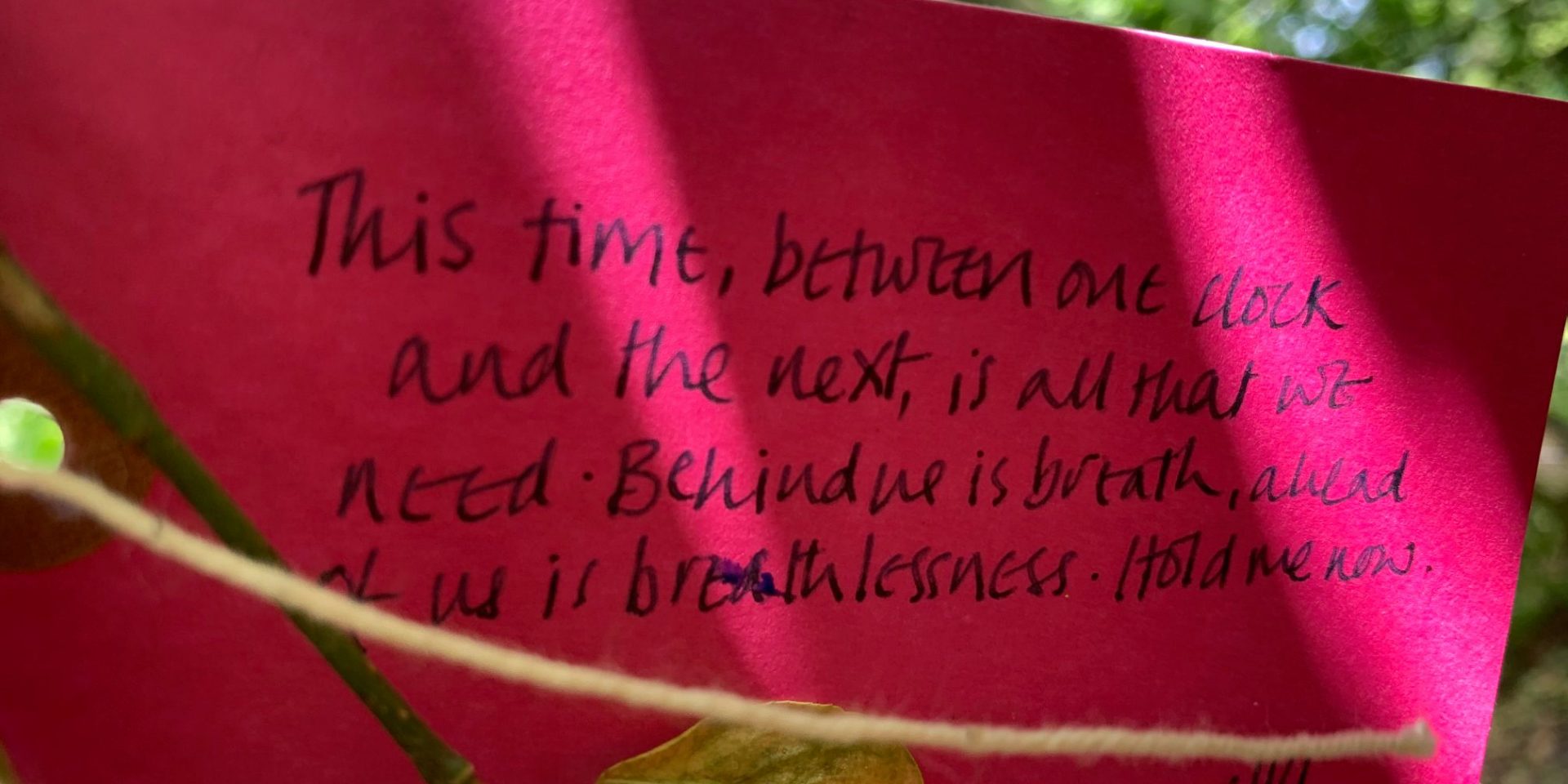 Another week of this new type of living has started and I never feel quite settled into it, despite being in one place almost constantly. When I speak to family or friends and refer back to when lockdown started, or what I was doing at the beginning of the year, I can’t believe it’s month six of 2020! Where did all those months go? How was I able to go through almost three months of lockdown in what seems like a blink of an eye, when I feel as though I haven’t done anything of much importance, or gone anywhere? Every year, as Christmas finishes and my family starts thinking of all the things we have planned for the next year, someone always finishes by saying, “And soon it’ll be Christmas again.” Then, when the next Christmas comes around, we talk about how we can’t believe that whole year has passed and it’s Christmas again! I feel this year it will come sooner than ever.

While time has carried on and the calendar pages are flipping over at the same rate, we aren’t moving forward in the way we’re all used to. Quite literally, we can’t move forward as much, or cover as much distance, because we’re confined to smaller spaces. Lots of businesses have had to close, school years have been interrupted and will end with a big question mark over everyone’s head (which will continue into the new school year). Celebrations have been put on hold, implementations have been postponed, projects have been halted, holidays have been refunded. It’s weird to think of myself as getting older, whiling away my 28th year in my flat, not moving forward in the way I had planned, as we all do when we ring in the New Year.

But we are still moving; moving sideways. We haven’t stopped learning, or working, or planning; socialising, creating, loving, singing. Businesses haven’t just all crumbled because how they used to conduct business can no longer be done. It’s inspiring to see the creative solutions everyone has come up with (sometimes almost immediately) to ensure that they continue moving during this time. I’ve seen everything from Pizzerias using their specialist ovens to create PPE, to Zoom/Teams/Skype/Houseparty (pick one, or all) challenges on virtual dates; and all along recruiters have posted about getting their candidates new positions, despite the inability to have face-to-face meetings. A friend started her new job and hasn’t even physically been to the office or met her team –  and yet she is doing well and is making connections, completing her tasks just as she would ‘normally’.

So, this week, our theme of ‘Moving Sideways’ celebrates the adaptability, creativity and persistence of our communities and fellow people in these hard, uncertain times. First up, is how Pen to Print, part of the London Borough of Barking and Dagenham Council, have proactively changed their approach to ensure they continue to support their communities, finding creative, accessible ways to reach people and get their voices heard. It’s a great example of an organisation being as good and as strong as the people who work there.

Pen to Print in COVID-19 times

Pen to Print immediately responded to lockdown by pausing all its face-to-face activity and going online. The valued volunteer team who were already working on Write On!, our quarterly magazine, sprang into action. Our first achievement was the publication of Issue 4 online (rather than in print as well) and starting a daily digest published on the Pen to Print website: Write On! Extra.

From the 23rd March we were off and running and the team haven’t stopped! Two months later, a few of our volunteers have reflected on what it’s been like working on this project during lockdown. To quote from one of the volunteers:  “Lena and Lisa continue to make things happen and invite us into the creative world Pen to Print unlocks for us; even getting us to use Microsoft Teams and Google Classrooms!”

We’re now looking at putting all this hard work into print by publishing a COVID-19 book. We’re really pleased this has also allowed us to connect with other projects who are recording stories in response to lockdown. We’re aiming to produce a fabulous, collaborative book we can use as a way to remember those residents who have, sadly, not made it through.

We have also been privileged to support the Love Letters To The World  Creative Writing Project, making it possible for it to continue throughout summer. You may have seen some of their poetry posted around Barking town centre.

Pen to Print is now completely online, with regular creative writing workshops attracting new audiences.  The ‘Virtual Book Club’ on June 12th was a great success and our debut ‘Ask The Author’ event in collaboration with The Wilbur And Niso Smith Foundation, is aimed at young people and families. On June 25th, in a Q&A session, co-author Chris Wakling will be talking about Wilbur Smith’s first children’s adventure Cloudburst.

Oh, and don’t forget the competitions! We kept these open until September 25th,  so you can still submit to The Book Challenge, Poetry And Short Story, Playwriting and the Michael Feld Creative Writing Competition For Young Writers, plus The Staff Writing Competition.

If you, or any residents, would like to read Write On! Extra, book an online event, or enter a writing competition, connect with us at: pentoprint.org – What’s Your COVID-19 Story? We’d love to feature it! 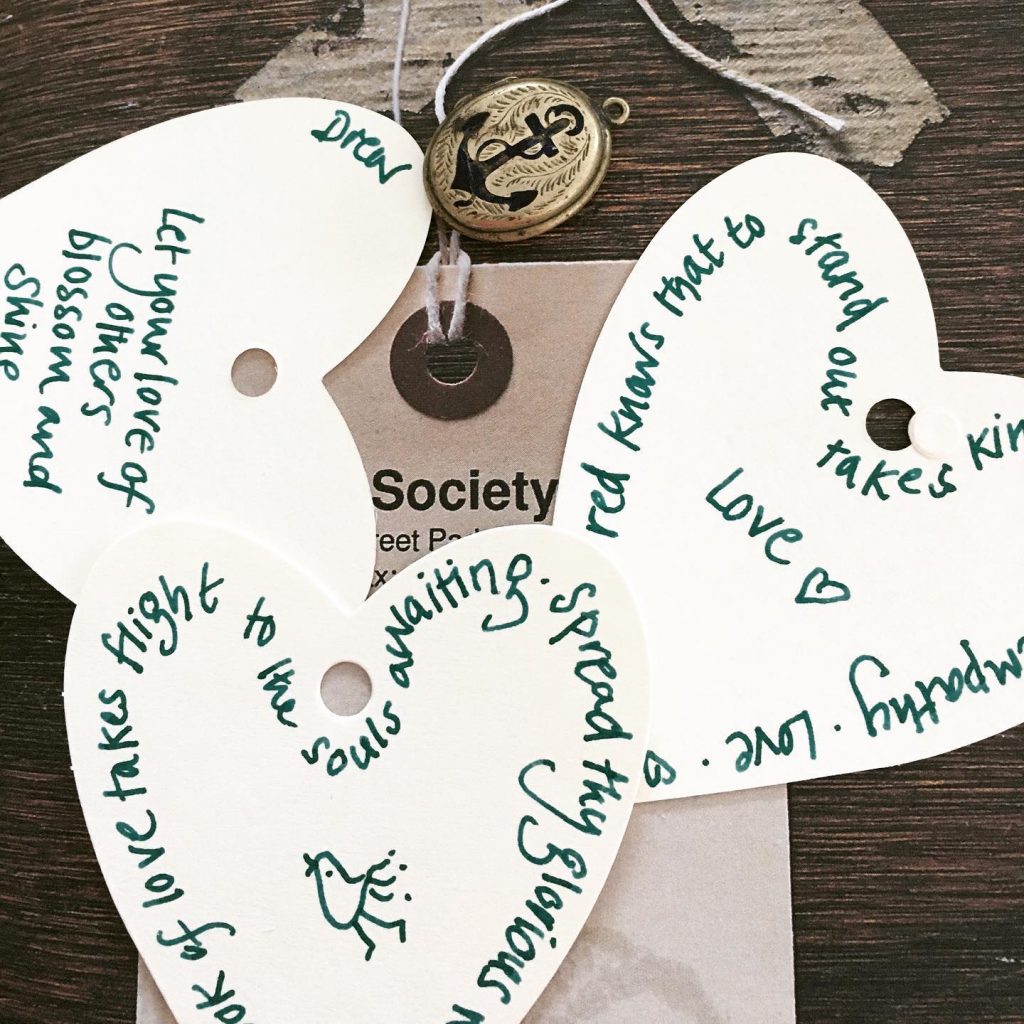 Next is a piece from Clare Cooper, who hasn’t let being confined to her home stop her creative juices from flowing! Showing us that you can find inspiration and humour no matter where you are, she tells us: Fleur and Belle are two vintage finials. They live on the patio and are not very happy about it, since they know they really belong on a roof (it’s a long story!). They are very observant, as all finials are, and like to know what’s going on, even though they struggle to understand most of it.

Here is their story:

Fleur and Belle were pleased that the Lumpen Two-legged Creatures (becoming more Lumpen by the day, if you asked them) had finally shifted themselves outdoors into the garden, to do a few useful jobs.

First, the Female Creature had mown the grass, front and back. It was still mostly earth, truth be told, but at least it was looking a lot less scruffy. “First cut of the year,” the Creature had been heard to mutter, “but what about MY cut?!” What could she mean by that? It sounded very nasty and quite possibly painful.

Apparently, there was something equally unpleasant doing the rounds at the moment, called “Corvid 19”, whatever that was. They thought that Corvids were those big, tough-looking birds that squawked and flapped around the garden all day long. And surely there were more than 19 of them?  It certainly seemed so, at times, when they were squabbling down by the bird feeder.  Such a racket!

Speaking of racket: those huge, frightening-looking, noisy birds that lived in the sky and flew overhead a great many times during the day seemed to have all but disappeared, for the time being, which was a blessed relief to all.

The Creatures appeared to be cooped up indoors rather a lot, these days, which was strange in itself, as they always liked to get out and about whenever they could. They still went out, but not for very long. Also, the Male Creature was here all the time, which was pleasing the Female Creature quite a bit. The long-suffering finials were becoming weary of hearing how lonely and fed up she was.

They were also bored with hearing her moaning on and on about something called a “Garden Centre” not being open at the moment, and how was she going to fill her pots and borders? In their humble opinion, and as far as they could see (which admittedly wasn’t very far, from where they had been placed on the patio), the pots and borders looked fine as they were and they couldn’t understand the amount of time and fussing the Creatures lavished on them. If only they themselves could receive that level of attention!

The patio-washing was next. Long overdue, they were given to understand. But what a difference! Who’d have thought there were these pretty colours beneath all that dull grey they had been forced to gaze upon, month after month?

Finally, the garden had a thorough watering. They hadn’t had any of the nasty wet stuff that fell from the sky for weeks, which was not a good thing for gardens, apparently, though the finials hadn’t minded too much. “Plants much prefer the rain, but needs must,” the Female Creature was heard to mutter, as she unravelled the garden hose.

As for the baffling words they had heard rather too much of lately – “Self-isolating” and “Social distancing” – goodness only knew what they had to do with anything, but they did know what “Social” meant and had no intention of distancing from each other. There was far too much going on and they needed to get their pretty little heads together to try to work it all out. And what did this other new, strange word “Virus” mean? It had something to do with the 19 Corvids and was also the reason why the Creatures weren’t going away for their usual two-week holiday to a strange place called “Corn-wall” – wherever that was. They were quite upset about it. Not half as upset as the finials, though: they had been looking forward to a bit of peace and quiet. As the Female Creature was often heard to say: “There’s no rest for the wicked!” 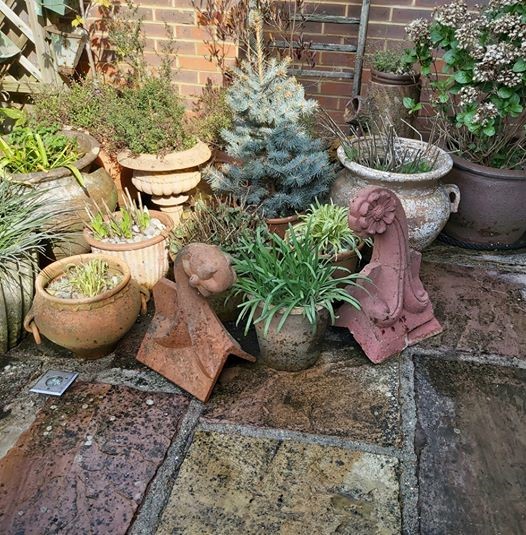 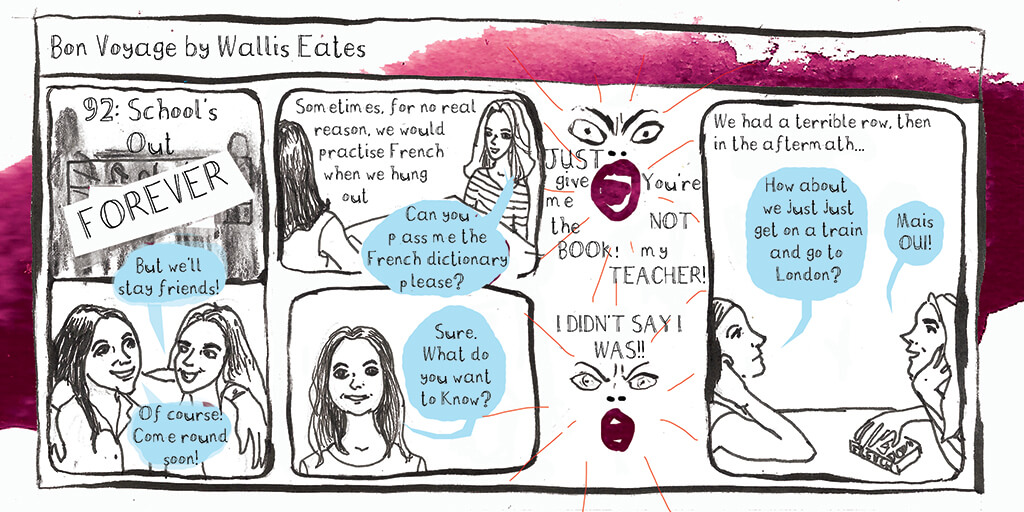 Like An Orange – a graphic novel about brain injury and creativity funded by the Arts Council National Lottery and crowdfunding with publishers Unbound Books. To support, please visit here: www.unbound.com/books/like-an-orange

Wallis is also the London co-ordinator of Laydeez Do Comics – https://laydeezdocomics.wordpress.com/

We haven’t stopped learning, or working, or planning; socialising, creating, loving, singing. Businesses haven’t just all crumbled because how they used to conduct business can no longer be done. It’s inspiring to see the creative solutions everyone has come up with (sometimes almost immediately) to ensure that they continue moving during this time.