I think a lot about technology. How dependent we all are on it, how the list of technological appliances you rely on gets longer the more you think about it. I rely on a digital alarm to wake me up, an app on my phone to beep furiously if my blood sugar level is out of range, an electronic toothbrush that vibrates when I should change the row of teeth I’m cleaning. If ever anyone says a phrase I haven’t heard of, or I can’t remember how to spell a word, or I can’t remember a song but know a lyric or two, I immediately turn to Google. I don’t even consider myself particularly tech-savvy, considering I don’t have Alexa (or equivalent) and I don’t like spending much time on social media; although I have helped various people unmute themselves and add hilarious backgrounds in Zoom meetings.

So it’s hard to think of technology or the internet as just good or bad. It brings people from far away together (I’ve been able to WhatsApp videocall my friend in New Zealand for her birthday) and connects us with more information than any generation before us (did you know that turtles can breathe out of their butts? Now you do, thanks to reading my page on the internet! You’re welcome).

But does everyone have access to the same internet? Just like COVID-19 isn’t an equaliser – we’ve seen it affects some people more than others. Our Thursday Connectors page has shown how governments across the world have responded differently; not everyone has access to the same quality of internet, or the devices to use it.

With the libraries closing their doors and no free Wi-Fi available while you sip your cappuccino in a coffee shop (see how many times I’ve mentioned coffee on Monday Memoirs by visiting older pages!), some people have far less access than before lockdown, and their world has become considerably smaller, physically and digitally.

With this week’s theme focusing on digital access (or lack of it), the stories below show how different generations are dealing with this aspect of lockdown, what families can do when schools are shut, and finding new solutions to new problems. So, if you’re done Googling whether turtles can breathe out of their butts or if it’s just fake news, let’s see how Emmanuel is doing:

Emmanuel is seventeen and studying Art and Design and Maths at Barking and Dagenham College. He spoke to me about how, as one of four children sharing a PC during lockdown and having only purchased his first phone seven months ago, he has a mixed relationship with technology:

We were lucky that our college set up Google Classroom pretty quickly, allowing us to transition to online learning, have a space to upload our work and ask for one-to-ones with our teachers. Sometimes, we still have virtual ‘classroom’ sessions with small groups, but it really depends on each student’s workload and where we are with our work.

For maths, we already used an online application for some of our work and continued to use this all the time during lockdown. This transition was hard, as before, even if we were using the online app, there was a teacher in the room with us, talking us through the equations and answers. Now, if I get a question wrong, the app tells me that I got it wrong and to try later, instead of showing me where I went wrong. It’s pretty intuitive, as you answer a range of questions and the algorithm then tells you which sections you need to focus on. There’s a lack of personal support, though, when your only learning is online. It discourages me. Maths is a serious subject, and it’s demotivating when I’m completely reliant on generic algorithms to learn. Technology isn’t elegant enough to replace having an expert in the room to interact with.

The internet is pretty distracting anyway. If you become demotivated and have no one around to make sure you’re keeping on top of your work, I can see how it would be only too easy to end up on social media instead.

I talk to him about living with three sisters who are doing their GCSEs and deciding who gets to use the laptop they share:

I’m lucky that my phone is advanced enough to be able to handle the Google apps and take high-quality photos to upload. That means I don’t need the laptop so much, making sure my sisters are able to do their GCSE work (such as their revision packs and online workbooks), without missing out on my own classes or progress.

Still, the speed and reliability of the internet in our house has been patchy, probably due to the strain of all of us using it at once. Sometimes I’m automatically logged out of apps, meetings or classes because of insufficient bandwidth. This means I miss out on parts of the class. It really makes you realise that, as advanced as our technology is, it’s still no substitute for a classroom, and not everyone has equal access to technology in their homes, in the same way that everyone has access to the same classroom at school.

I ask him what he thinks generally about technology. As a young person, I assume he’s a clear advocate for all things online (I feel much older than 28 due to my lack of social media presence and unwillingness to post regular updates about my life – I don’t even have any photos of food on my Instagram!):

Even though technology is easily accessible, it’s still very inaccessible for many people, and they end up having to go to the library just to use the internet, which they can’t do now because of lockdown. It’s something we take for granted because we have it around us all the time, including how we’re talking now (via a Zoom meeting). We aren’t really aware of its presence until it starts lagging, or drops out, or we need it for more serious reasons than we’re used to.

And actually, a lot of people don’t want to have such a connection to technology or the internet. I didn’t have a mobile until about seven months ago. I felt intimidated about being the odd one out at school; instead of finding people on social media through their name and just DMing them, I would have to ask for people’s emails and socialise in that way. As soon as I got it, I felt like a burden had lifted. I was talking to people more and wasn’t seen as the weird kid anymore.

Since I got my phone, I can see that technology is a double-edged sword. It connects you with the world and keeps you socially interacting during times like this, but in another way you’re distancing yourself from social reality, because you get caught up in scrolling through influencer’s profiles that look as though they have lots of money, when really, it’s all an illusion. If you don’t have the ability to remove yourself from that online presence and wind down, I think it can make you unstable.

On the other hand, I’ve seen people think that, once they get a certain type of phone or laptop, they’ll use it loads and be able to set up all these social media profiles and kick-start their online presence, because they’ve seen everyone else doing it. But when they actually get it, they don’t use it as much as they thought they would.

It’s great to see such reflection from someone so young and, while we discussed the balance each of us needs to find between technology aiding us and enveloping us, we can all agree that it gives us access to some of Emmanuel’s vivid illustrations: 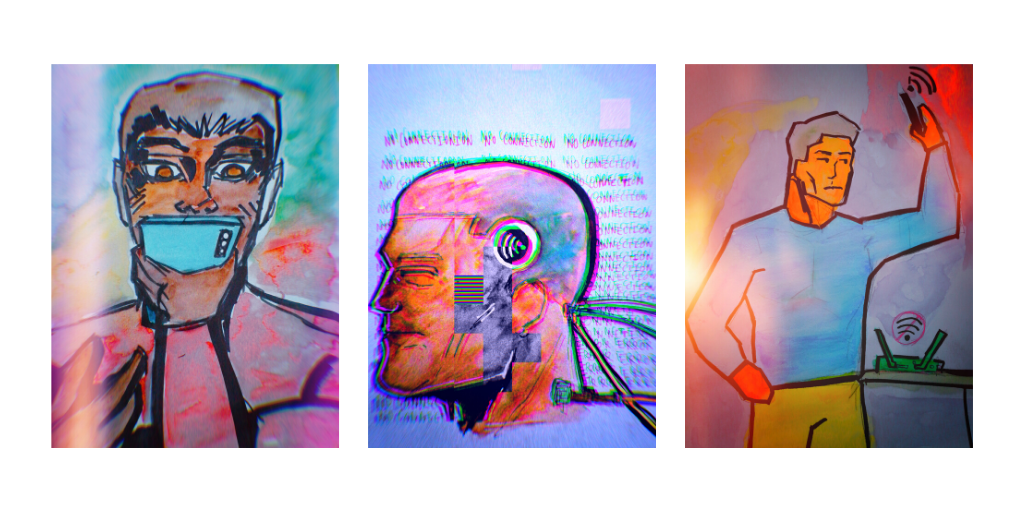 Now, Pen to Print alumni, Michelle Sutton, tells us how her grandparents have been coping during lockdown, and how she and her family have worked to make sure they stay in touch:

During lockdown, one of the things everybody has been going on about is their new virtual experiences. Home-schooling, working from home, Zoom or Teams meetings, exercise classes, online book launches and workshops — even Write On! Extra — to name but a few.

I’ve seen so many news reports and features on TV, highlighting how families and friends are enjoying conversations, quizzes, bedtime stories and even dinners over video calls, and I found myself thinking people may have forgotten that not everybody has access to this new ‘virtual living’.

Take my grandparents, for instance. At 79 and 81, they are classed as vulnerable and have been spending their twelve weeks (plus) shielding in their house. They don’t have the internet, or smartphones and only have basic Freeview television. Oh, and no smart TV, either, so no BBC iPlayer, Netflix or Disney+. In fact, even before lockdown, a lot of their watching content was provided by us recording programmes onto videotape. Yes, you read that right. Video. Tape.

When my grandparents were told to stay indoors and not have any visitors, they lost the ability to actually see most of their loved ones’ faces. Of course, they could still have phone calls, but we all know that’s just not the same. 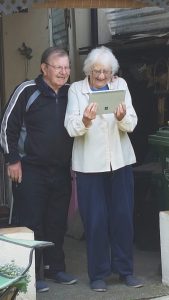 Halfway through lockdown, my brother — who is a Network Manager in a school — was able to get a tablet loaded with some mobile data for them so they could receive a special Skype call from his daughters (their great-granddaughters, who are six and one) on my nan’s birthday. After some trial runs and patient instructions over the phone from yours truly, the call was successfully achieved, if rather shambolic and hilarious to witness, as they had never attempted anything like this before. But their expressions were worth the exasperation. 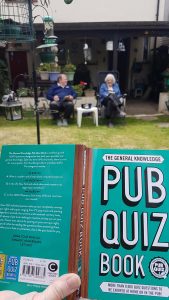 I doubt it’ll become a frequent thing. As I said before, they don’t have the internet and mobile data would cost them.

Luckily, they have a long garden and access to it via an alley, so we (my parents and I) were still able to visit, without breaching their shielding. I also bought a pub quiz book and every Sunday we play two ‘physical distance’ quizzes with them which they seem to enjoy, if Nan writing their numbers out in advance is anything to go by.

My parents do their shopping. Mum has cooked them meals for special occasions (their very own ‘meals-on-wheels’) and Nan binged her way through the entire book series of a certain boy wizard. Although, currently, with sport back they’re enjoying the snooker and football. Thankfully, there are enough matches on Freeview for them to enjoy, including Man United, so Grandad is happy!

And it’s the return of Wallis Eates with another hilarious strip, titled: Road to Nowhere: 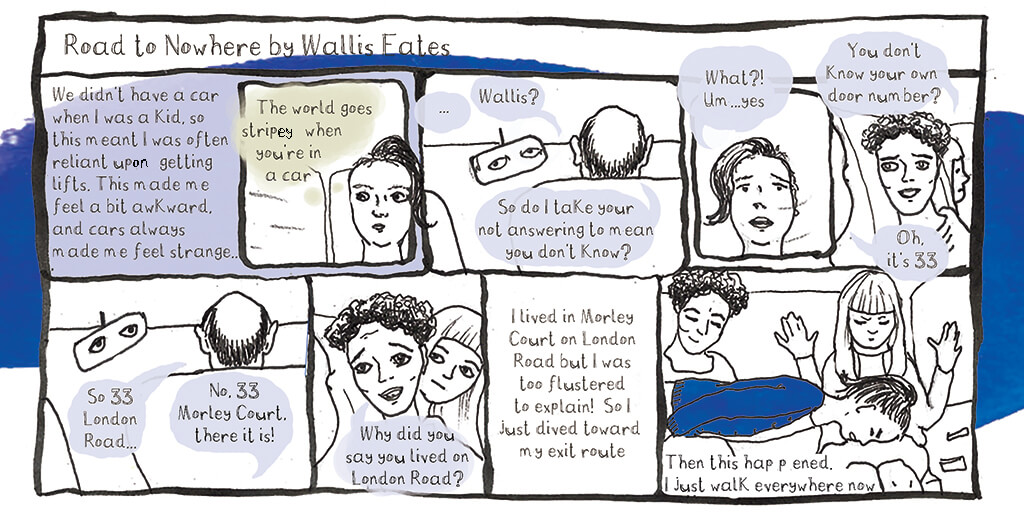 Like An Orange – a graphic novel about brain injury and creativity funded by the Arts Council National Lottery and crowdfunding with publishers Unbound Books. To support, please visit here: www.unbound.com/books/like-an-orange

Wallis is also the London co-ordinator of Laydeez Do Comics: https://laydeezdocomics.wordpress.com/

Click here to check out the latest issue of Write On! magazine.