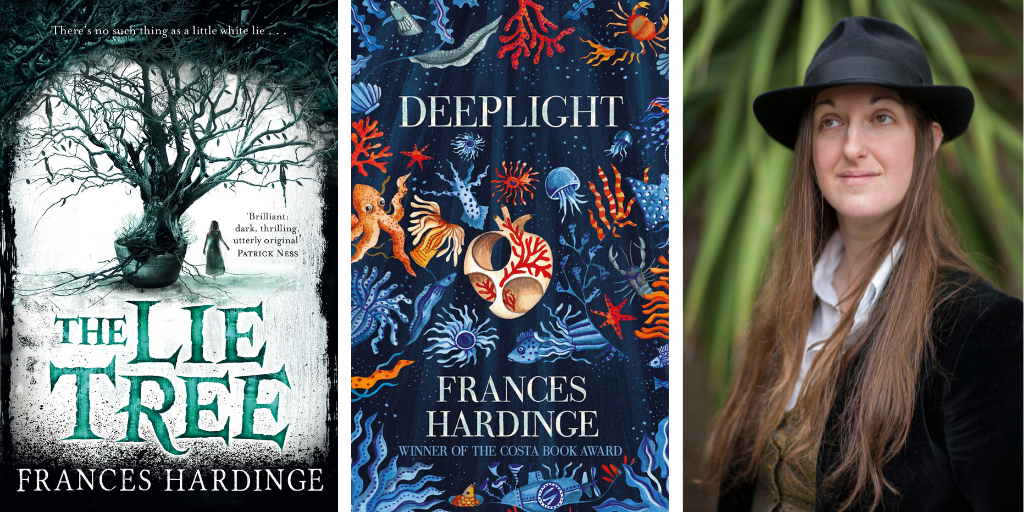 It’s fitting that the theme for Write On! this issue is ‘Wonder’ because it was with awe and wonder I sat waiting for the Zoom call to connect me to Frances Hardinge. I’d seen the beautiful cover artwork for her novel Deeplight and immediately picked it up and read it, thoroughly enjoying the adventure and fantastical world-building. My absolute favourite was the inclusion of a siphonophore-like deep-sea god. I mean, talk about connecting to incredible imagination! So I was thrilled to be greeted with not only the lovely Frances, wearing her trademark hat, but also a fabulous homemade steampunk submarine backdrop. It put my kitchen wall to shame.

Frances told me the submarine had been a lockdown project as, like me, she’d found it difficult to write then. After admiring the nautical marvel, we launched straight into discussing her beautiful book covers. Frances’s covers are designed by the mysterious ‘H’, a highly talented Romanian designer.

Naturally, I wanted to know how her writing journey began. Like many writers, she’d initially taken the short story route, submitting to magazines and competitions in her late teens and early twenties, seeing some success. Belonging to a writers’ group really helped her confidence and craft, as she received useful feedback and critique. A fellow member, children’s writer Rhiannon Lassiter, mentioned to Frances that her writing felt very much like it was written for children.

“I hadn’t actually realised I was writing for children, but as soon as the idea was put into my head, the whole book, Fly By Night, came to life and I started writing with more enthusiasm, experimenting and very much pleasing myself. Putting in things that I found interesting and things that I found funny or exciting.”

However, like many of us, Frances suffered from galloping imposter syndrome, even after Rhiannon told her the opening chapters were good enough to send to a publisher.

“I said, ‘No, it isn’t. This is just an experiment. This is basically rubbish, but I’m having some fun and I’ll see where it goes and then I’ll bury it in an unmarked grave.’”

Luckily, Rhiannon didn’t listen to Frances’s cowardly nonsense, stealing her chapters and putting Frances’s work in front of her editor. Fly By Night was an instant hit and a three-book deal from Macmillan swiftly followed.

Despite this early and continuing success, Frances says she’s only just starting to believe she might actually be a really good imposter. With every book, she has that same fear and it hits home around the two-thirds mark. It’s a real push to get that final third written and out. That being said, writing for children is definitely a more freeing experience.

“It’s a better fit for the way I think, to be honest, but also… adult readers want to know what they’re getting in terms of genre and story, whereas younger readers are a lot more open-minded.”

Having an open-minded audience means Frances is relatively free to mix genres and put mystery, fantasy, horror, thriller and historical elements into one book.

I ask whether she’s ever experienced any stigma from being, essentially, a fantasy writer. Frances agrees that adult readers often approach fantasy, and indeed Young Adult (YA) with many pre-conceptions. I agree wholeheartedly as she says the readers who love YA are the ones who’ve actually taken the plunge and read them. All you need to do is dip your toe into these wondrously creative waters; if you don’t, you might be missing out on a great read!

I ask Frances whether she consciously changes her writing approach because she’s writing for children.

“Younger readers are much more honest. They’re not going to drag themselves through a book for the bragging rights. If it’s boring, they’ll do the much more sensible thing and stop reading it.”

Frances admits this typical younger audience reaction makes her acutely aware of her own writing faults. Her love of words, metaphors, descriptions and language means she naturally overwrites, so needs to be ‘hit on the nose with a rolled-up newspaper.’ However, she never dumbs her writing down.

Frances has the utmost respect for her readers. They’re smart kids who can work out meaning from inference and look up any words they don’t understand. Occasionally, she’ll provide an in-depth explanation for more complex concepts. She sees it as writing for a younger version of herself (the 12-to-14-year-old one) and she focuses on the things that interested her then: the creepy and mysterious, the adventure of finding out about new things, as well as exploring the strange and fantastical.

I want to know more about Frances’s writing style, to see whether she’s a planner or more of a discovery writer, like me. I’m relieved to hear it’s a chaotic process for her and that her daily word count depends on the proximity of her deadline; something I can relate to. That said, Frances declares herself a planner. Once the first nugget of an idea arrives, she researches and brainstorms the setting first, then the characters and then the plot. A rich setting leads to more plot ideas and allows her to add in historical elements. She admits that researching her novels is like falling down a rabbit hole, especially when it comes to her love of history. The research and knowledge adds realism to her writing and allows her to describe things better.

“Everything can be viewed as rich, strange, funny, mysterious, bizarre and full of endless wonder.”

Frances says her brain injects wonder into things all the time. For example, if she’s driving somewhere with her partner, he will know where they are, whereas Frances notices the strange cat sitting on the wall and the purple handprint under the bridge.

The key, she says, is to accept wonder. Adults are expected to have all the answers; they should know how the world works. Yet if you stop asking questions, because you don’t want to look ignorant, then your entire worldview ossifies.

I have no problem asking questions and we move on to Frances’s workspace. This is usually a laptop on the kitchen table, close to cups of tea, whereas her partner has built himself a mini cubicle in their front room, amidst a terrifying board game collection. My ears prick. Board games, you say? We spend the next ten minutes discussing the merits of role-playing and tabletop games, with an enjoyable digression on LARPing. Frances recommends games that are character-heavy and rule-light for maximum enjoyment.

Time is against us, but we do spend a few minutes talking about winning the Costa Book Of The Year Award with The Lie Tree in 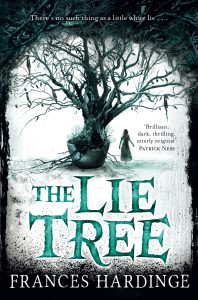 “It was nice in a giddy sort of way, but I’m glad it happened with my seventh book and not my debut.”

The scrutiny and exposure could have been massively destabilising. She spent several weeks in a perpetual state of surprise, feeling helplessly grateful while being convinced the book ranking on Amazon was broken. She credits Macmillan with looking after her and keeping things calm and grounded. Winning the award obviously led to lots more public speaking, including book festivals abroad, interviews for national press and having a photoshoot. The perfect opportunity for me to ask about Frances’s hat. A black fedora. Does it have anything to do with another wondrous, hat-wearing author, Sir Terry Pratchett? It doesn’t. Frances is a habitual hat–wearer, with an impressive collection inspired by a love of black and white spy movies full of adventure, mystery and cool coats with the collars turned up. Although she doesn’t write while wearing her hat – disappointing – she did show me a rather fabulous top hat with a miniature china tea service upon the brim – wondrous!

We can’t finish our chat without me asking what Frances’s favourite children’s fantasy book is. She tells me it’s The Dark Is Rising by Susan Cooper. A book that had a lasting effect on her world views, full of folklore and atmosphere.

“Every place is subtly magical. We stumble into wonder by accident.”

Unraveller will be Frances’s next book, out in Autumn 2022, so I ask her for a glimpse of this new story and she tells me it will be another YA novel set in an alternative world, with a mysterious marsh wood, ancient pacts, curses, an erstwhile heron and cannibalistic horses. I know what I’ll be reading this Autumn. 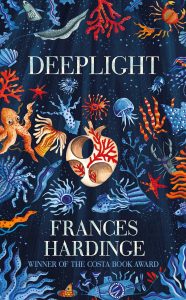 You can find out more about Frances and her books on her website franceshardinge.com  and connect with her on Twitter: @FrancesHardinge

Get involved with Write On! Audio. As a contributor, you could win A Writer’s Journal Workbook by Lucy van Smit. All Write On! Audio submissions (creative or opinion pieces up to six minutes, inspirational moments one to two mins – a short poem for example and why it inspires you- submitted before 20th February will be considered eligible). The first two pieces chosen for broadcast will receive a book. Submit on: pentoprint.org/get-involved/submit-to-write-on/.

Launched by Bloomsbury, A Writer’s Journal Workbook is packed with creative tasks, goals and advice! As an added bonus, you can also purchase it directly with this special discount code: AWJW25

Younger readers are much more honest. They’re not going to drag themselves through a book for the bragging rights. If it’s boring, they’ll do the much more sensible thing and stop reading it. 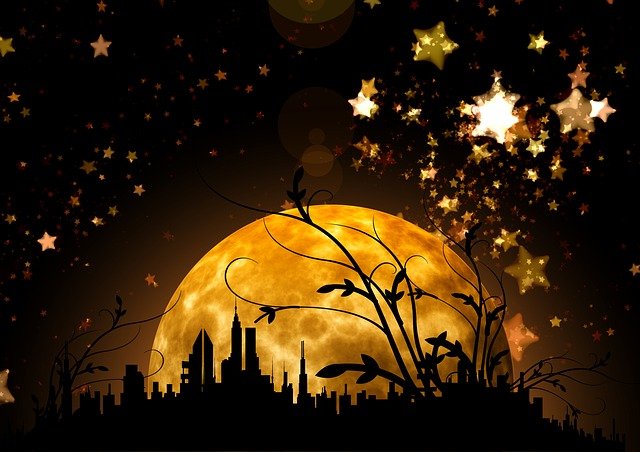