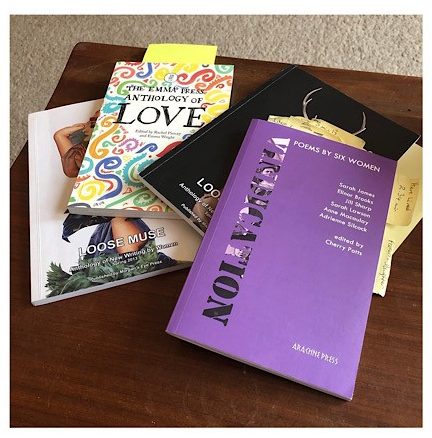 This week, Write On! chats with poet, Anne Macaulay. 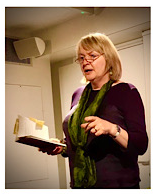 Anne loves poetry: writing, reading, performing, translating, reviewing. A regular at Barking’s ‘Spoken Not Stirred’, she has performed in Amsterdam and many London venues, including The Barbican and Sadlers Wells. Published in several anthologies, she was also one of six featured poets in the Arachne Press, Vindication anthology. Her review of Tom Bland’s The Death Of A Clown appeared in The High Window on-line magazine. She has two pamphlet reviews due in Tentacular magazine’s next on-line blog, Elsewhere.

AM: I write poetry mainly, although I have written the odd short story and memoir pieces. I am often drawn to narrative within a poem and tend to use fine detail for description more often than similes and metaphors. I am interested in form, and have written poems in a variety of these, including prose poetry, metostic poems, sonnets, tanka and shape poems. Like many poets, I have written quite a bit from my childhood memories, but I also write from current experience. Although I have strong political views, I don’t often write overtly political poetry, but I have written some. For example, in the Arachne Press Vindication anthology, all ten poems are to do with women’s experience and some are overtly feminist, including the poem Vindication (which is actually a found poem taken from words written by Mary Wollstonecraft in her book A Vindication Of The Rights Of Women), and the poem A Man Once Said To Me.

AM: For various reasons, including my husband’s ill-health, I have not been writing much poetry for some months. I’m trying to get myself back into writing again. One of my targets is to pull together a pamphlet of my poetry, as I have so many poems: some finished, some in need of drafting and, of course, those that I need to ditch. It’s often very hard to be objective about one’s own work. I also look forward to when I can get out and perform again, once the pandemic becomes more under control. One new writing venture I have enjoyed over the last year has been writing reviews for poetry pamphlets published by Bad Betty Press. That was very interesting and, again, was useful in making me stand back from my own poetry.

AM: Although I had written a handful of poems when I was a young person, I never considered myself a poet at all. I started going to poetry writing classes, first at City Lit, then at The Poetry School when I was nearing the end of my career in schools, and realised how much I enjoyed the writing process, particularly poetry.

A variety of things inspire me; sometimes an idea just pops into my head as I step out of the shower, or return from a walk. I have a poem based on the children’s word game: “I went to the market and I bought…” (published in the Arachne Press anthology, The Other Side Of Sleep), which was one of those stepping-out-of-the-shower ideas. Other times, I am given a prompt from my class which stimulates a new thought. I’ve also been inspired by my love of other types of culture and have written several poems inspired by paintings, by statues at the British Museum and I have a short series of poems inspired by flamenco, some of which are in the Vindication anthology. I don’t have one tried-and-tested method or source and I’m not the most disciplined of writers, to put it mildly!

WO: The last issue of Write On! explored the theme of Head In The Clouds – exploring inspiration and creativity along with the need to stay grounded. Can you tell us a bit about how you manage to combine the two in your writing?

AM: As I said, in answer to the last question, I get inspiration in a number of ways, often quite randomly. I don’t often write highly imagistic poems, or those with a lot of fantasy or elaborate, fanciful wording. I feel I’m  very rooted in my experience of life and the world. Even when writing a poem which is, perhaps, a bit surreal or absurd, I still approach it in a practical way, making it as realistic as possible. For example, I have written a poem about going pot-holing with George Clooney; clearly ridiculous but with a focus on what I imagine that really might be like, with absolutely nothing romantic involved or hinted at!

AM: Do it! If that is too minimal a response, I would also recommend going to workshops where you learn how others write poetry and how others view or critique poetry, which gives a wider perspective of quality and range in writing. Being able to look more objectively at one’s own work is  an important skill and discussion with others often helps to get ideas flowing. At the moment, with COVID-19, it isn’t possible to attend face-to-face workshops but there are many online classes which can also be very stimulating. My regular Poetry School workshops are now online and, although it would be lovely to talk face-to-face, it’s still a very good way of learning more and sharing ideas.

WO: Would you rather write or perform?

AM: Once I get started, I enjoy the writing process  There is such a feeling of satisfaction in expressing ideas in the best way I feel I can. This is often true when writing a poem with a particularly tight form; almost like solving a puzzle. However, it’s important it still stands up as a poem and not just as a fulfilment of a puzzle or exercise. I also really enjoy performing my poems but I have to have written them first, so it’s not an ‘either-or’ preference. I have seen poets who can improvise work straight into performance, but I don’t have those skills. I often perform at the local Barking Poetry event ‘Spoken Not Stirred’ and used to perform quite a bit in The Poetry Cafe at ‘The Loose Muse’ event for Women poets and ‘Poetry At 3’. For a variety of reasons, I have not been at either of these events for some time.

I also used to perform regularly at ‘Beyond Words’ in Gipsy Hill. All of these regular slots were very different, but what was common to them all was their welcome and inclusivity. Being noticed in performance is what led to many of my poems being published.

AM: I have already mentioned that I plan to work on drawing together a pamphlet of my work and I also plan to send more work out, which I have done less of recently. I haven’t mentioned that I enjoy translating poems and those are classes that I have attended regularly too and will again when the next sessions start. I have also recently been involved in another two local projects to do with writing under lockdown: one with Studio 3 Arts and one with the ‘Love Letters To The World’ project. I am always open to new directions and ideas.

AM: I have never hankered for a pet at all, athough I do enjoy seeing animals in nature. As a young person, I found Kes (A Kestrel For A Knave) by Barry Hines a very powerful book and found the relationship between the boy and the kestrel very poignant. A few years ago, when on a road trip in America, I read Travels With Charley by John Steinbeck, which was a piece of memoir rather than fiction, but again was struck by the feeling he had of companionship from his dog, Charley, that made his trip less lonely and how Charley often acted as a sounding board for his thoughts. In one of the poems I have in the Vindication Anthology by Arachne Press, I wrote about a woman and a jackal, hiding from pursuit by hunters. I was interested in the idea of a typically unloved creature teaming up with an unloved person, both drawn together by being hated and hunted. 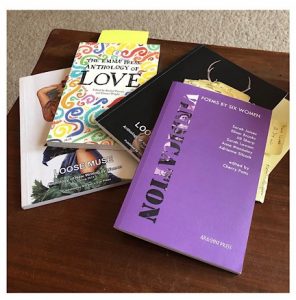 Her more recent work can be found in The Emma Press Anthology Of Love in the Vindication Anthology by Arachne Press.

I am interested in form, and have written poems in a variety of these, including prose poetry, metostic poems, sonnets, tanka and shape poems.