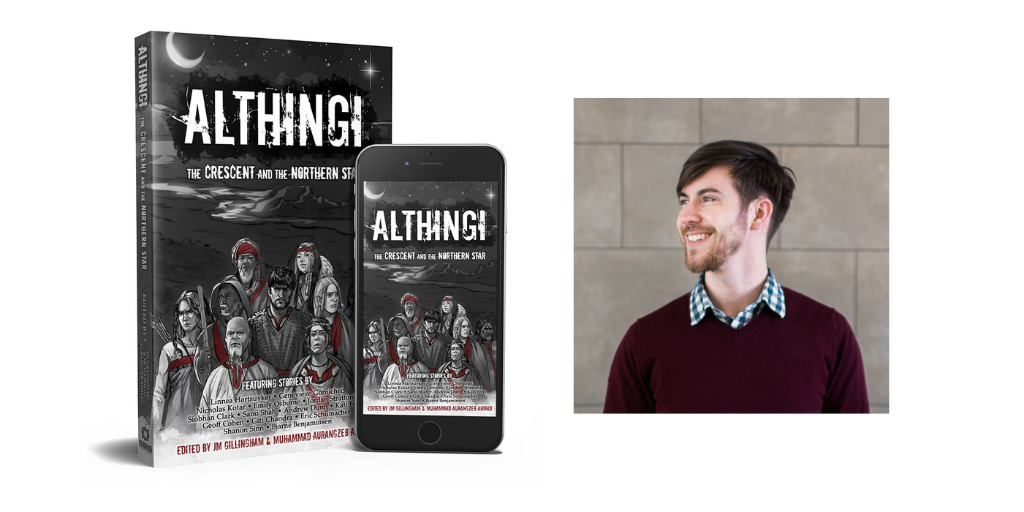 Yes, that was also my reaction when Alana Joli Abbott from Outland Entertainment suggested the concept for their next anthology, a collection for which I had been brought on board as a first-time editor. It was to be a series of short stories based on the characters of the historically-themed game Althingi, set in Viking Age Iceland, a card game which I designed and Outland Entertainment was about to publish. These were uncharted waters for me, though I had published several books, and I felt a thrill akin to the excitement of Viking adventurers as they set out to discover new worlds. A little more than a year later, Althingi: The Crescent And The Northern Star is a complete anthology published May 2021, co-edited by myself and my good friend Muhammad Aurangzeb Ahmad.

Most are unaware, as I was, of the many historical connections between Vikings and Muslims, who both enjoyed a Golden Age of sorts from around 800 – 1100 A.D., while the rest of mainland Christian Europe suffered through the so-called Dark Ages. For example, the only eye-witness account we have of Vikings comes from Ahmad ibn Fadlan, an emissary from the Abbasid Caliph al-Muqtadir of Baghdad. It’s thanks to his personal journal we have a description (and one of the only detailed attestations) of the iconic Viking burial at sea in a flaming longboat. Alternatively, many Muslims may not know that Abd al-Rahman III, who ruled the powerful Cordoba Caliphate during the Golden Age of Muslim Spain, dyed his blond beard black to match his Arab contemporaries and was ridiculed by his Eastern counter-parts for his blue eyes; both genetic traits acquired from a long history of intermarriage between his forebearers and those from more northerly regions in Europe.

Muhammad had previously edited an anthology of Islamic Science Fiction called A Mosque Among The Stars and was the driving force behind a decade-long groundbreaking Islam and Science Fiction project online. In calling him for the first time, I was a bit nervous. Would a well-known Islamic Science fiction writer and editor be interested at all in Vikings from the distant past?

It just so happened that he had recently come across some historical material on this very topic and was keen to dig deeper. And so we began unravelling the threads of history, me from the Norse Sagas and Muhammad from the ancient Arabic texts, until we met in the middle. Indeed, we discovered historical and archaeological connections all over the ancient world – spanning Iceland to India, northern Norway to sub-Saharan Africa.

Confident through our research that we had a viable topic, we began to reach out to prospective contributing authors in our respective circles. I sent out invites to authors of Viking fiction and Norse historical fiction, while Muhammad put out a call to those in his circle with an interest in the past as well as the future. The result? An incredible blend of perspectives and styles, an intricate interweaving of views and experiences that has blessed me with a wider, richer view of the horizon of history.

For me, much more important than the ‘what’ of this anthology has been the ‘why’. It has long been my mandate to reclaim Scandinavian history, myths and folklore from those who have tried to corrupt it for racist causes. The Muslim community has also faced challenges, many with regard to extremist groups trying to claim their faith as a vehicle to carry out their violent acts. By building bridges between these two communities, we hope to transform the false historical narrative of ‘pure’ or ‘separate’ cultures and bring to light the many connections that bind us together in a common pursuit of knowledge, wisdom and happiness.

For me, one of the most heart-wrenching aspects of this project is that the youth of both communities, those of Scandinavian heritage and of the Islamic faith, have been the number one targets of violent radicalisation efforts online over the past decade. Though the vast majority of people in both communities continually denounce the perversion of their identity or beliefs, we continue to suffer, seeing our young people turning down the darkened path. It’s our hope that Althingi: The Crescent And The Northern Star can, in some small way, be a beacon of light, hope and reconciliation between these two communities.

For those setting out on the journey of editing an anthology, I have a few, hopefully helpful, pieces of advice. The first is this: reach for the stars (quite literally). You’ll be surprised at who might be interested in contributing, if you have selected an interesting or politically relevant topic. Further, even writers who have achieved success need to continue to write and an invitation is sometimes a welcome change from the endless barrage of rejections they must endure. Be sure to pay your authors. Furthermore, pay them well and pay them on time. In terms of compensation, $0.08 – 0.10 per word is standard with a word count cap (e.g. six thousand words) which authors can exceed, but will not be paid for if they go over.

Second, choose an interesting topic. This, more than anything else, helped fuel the soul of this project. I shudder to think what might have come of a straightforward Viking anthology instead of our exploration of the interactions between Vikings and Muslims. Instead of ‘Romance’, maybe choose ‘Quantum entanglement and its applications to heart-broken scientists’. Instead of ‘Western’ maybe choose ‘Cowboys ride south and encounter a lost city of the ancient Incan Empire’. The excitement and originality of your theme will help hook contributing authors as well as both readers and the press when launch day comes.

Third, give yourself much more time than you think you will need. For Althingi: The Crescent And The Northern Star we gave authors six months to write their first drafts and then another month to polish them after our initial round of editor revisions. We still came in about four months behind the original launch date. This was partly due to late submissions, but also other factors, including publisher delays and my foolish decision (as a Canadian) to accidentally set a submission deadline the same week as the American election. Oops!

Fourth, I cannot stress the importance of a professional, eye-catching cover. Many anthologies I’ve read and enjoyed suffered from a severe lack of visual appeal, either because the cover was not professionally produced, or because very little thought was given to its design. If you’re not working with a publisher, then hire a cover artist. I cannot give a range of reasonable rates, as I don’t have experience with this particular part of the process, but I have had success in other artistic endeavours, hiring designers on freelancer sites such as Upwork.

Fifth, and finally, if you are able to work with a co-editor, then do so. It’s been such an amazing experience to work with Muhammad, to have a partner to bounce ideas of off and weigh heavy decisions with. Besides, editing an anthology is a lot of work!

In the end, an anthology is a tapestry of many colours, a mosaic of reflective angles, shining brightest when the light comes from a multitude of sources. As the editor, you may not be creating the content of the stories but you are the captain of the ship and it’s your job to make sure it arrives on time and at its intended destination.

Plan ahead, work hard and stay true to your vision. You may end up curating a literary experience, transforming your readers’ lives for the better!

Issue 8 of Write On! Magazine is out now. Find it here.

For those setting out on the journey of editing an anthology, I have a few, hopefully helpful, pieces of advice. The first piece of advice is this: reach for the stars (quite literally).