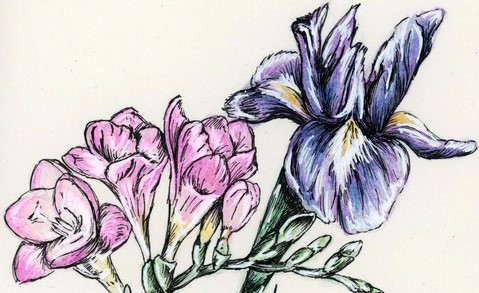 Welcome to my fourth showcase for June. If you’ve been following this page each week, you will know I’ve been bringing you writing which explores human transformation. In the first week, I brought you an extract from my own novel, in which two real Barking children are just ‘expectant buds’ at the start of their lives and, now that we’re nearing the end of this theme together, I am introducing you to the magnificent Iris, a retired florist in her 80s whose own name is a flower, and who has been desperate to blossom but is very much a late bloomer.

Sally Siner’s short story Dear Henry is funny and vivid, just like Iris, whose voice rings out from the printed page. Sally says she doesn’t really know where this story came from, but she can hear the voice of her own Nan in Iris.

Iris gives hope to us all, reminding us that, no matter how old we are, or what has gone before, it’s never too late to transform.

I’m at a loss, trying to find the words to let you know what you mean to me…

I’ve always struggled writing cards – never enough room to say anything meaningful, but space demanding more than a simple Hello. Often, I’ve resorted to clichés: Many happy returns, or, on difficult occasions, Thinking of you, but there are times, aren’t there, when a cliché just won’t do? Say it with flowers, that Interflora slogan from some years back; now that I can relate to. But there’s still the obligatory mini card to attach.

The irony of my lifelong dedication to floristry has never been lost on me: all those lovely gentlemen gracing Petal Palace with their competing wafts of scent. Sending flowers to lucky wives or lady friends (‘penance posies’ Brenda used to call them, but I’ve never had any time for rumour-mongering). Then there were the breathless brides-to-be, agonising over their wedding bouquets; fashions changed over the years, but the light in their eyes never did. Of course, there were the sadder occasions: lilies, carnations, chrysanths; heartbreakingly placed to form the word Mum or, worse, Son.

Oh, that is pure literary genius, Iris, if only it could’ve been a week or so back.

I’m 84 and never felt this way before…

Or why not wait until next year?

Sweet 86 and never been kissed!

For goodness’ sake, it’s all so juvenile. And yet, as a child, I was oh-so-grown-up. “She’s been here before,” they used to say. Perhaps that was my problem, always too level-headed to let a silly little thing like romance get in the way. “Career girl,” my mum called me. I never really thought of being a florist in that way, but I was grateful for the label. It was a relief, something to stop the aunts gossiping at weddings. They couldn’t deny my commitment, evidence decking the pews in its blooming glory.

In all my years, I’ve never met anyone who I…

I want to put, “so strongly desire to press my body against,” but, quite apart from the fact that it’s not very becoming of a lady, my body is not what it was. Not that I was ever exactly Twiggy – too fond of custard tarts for that. No, you won’t catch me spinning yarns about a 22-inch waist. Still, in recent years, the extra padding’s paid off. I’ve maintained my hourglass shape (more of a 24-hourglass nowadays) and my round face has kept the wrinkles at bay. The skinny minis I used to be so envious of are all shrivelled prunes now! Oh, I know I shouldn’t laugh.

Believe it or not, I’ve never actually known a man, nor especially wanted to before now, to tell the truth (well, there may have been the odd exception). How does a ripe and ready (but not yet rotten) spinster of 85 make advances towards a twice-widowed 77-year-old gentleman? (I hate that word ‘spinster’ — always makes me think of the evil witch out of Sleeping Beauty.)

I’m not daft, I know time’s not on my side, which gives me a deadline: I do not want to die a virgin. There. I’ve said it! Blushing in front of myself. I despise that word even more than spinster; I’m not sure why. I mean, I’ve always had a lot of respect for Queen Bess and I quite like that Richard Branson fella, also a career person, like myself (though I do think it’s a vulgar name to give to a multi-million-pound company).

Obviously, I fantasise about him turning up at the door (Henry, that is, not Mr Branson) with a bunch of my favourites (yellow roses) and a sapphire ring (diamonds may be a girl’s best friend but, let’s face it, they’re common as muck these days and cause no end of trouble in Africa).

Hark at me! I’m not a silly young thing (nor ever was, as I’ve said). If I want something, I’m going to have to go out and get it. Of course, Brenda wouldn’t approve, but then again, not having to listen to Brenda droning on all day is up there on my top ten Benefits Of Retirement list. There were only so many times a week I could pop out for an urgent stock up on oasis. I remember the day Brenda announced her niece had proposed to her beau on February 29th. “In our day that wouldn’t have been acceptable,” she said. I’ve never understood any of this our day nonsense. As far as I’m concerned, as long as I’m alive, it’s still my day – right up until the moment they turn me to ash. Last I heard, the couple are still desperately happy together; driving Brenda spare, no doubt.

I sometimes wish I believed in fate or God, but I’ve never taken the leap. I love that song by George Michael; how’s it go? About turning a different corner. I’ve thought about that idea a lot over the years. How many corners have I turned in my lifetime and bypassed Mr Right? Maybe if I’d missed the bus a few more times, I might have bumped into the father of my fantasy children. But I’ve never been one for missing buses.

Only this time, with Henry, I had a bit of luck. Who’d have thought that both of our washing machines would’ve packed up on the same day? Quite a conversation starter, let me tell you – the merits of Zanussi versus Indesit. And so it was, that both of us should be at the launderette at the same time on the same day, for the first time in donkeys.

And yet, I shudder to think how that chance meeting nearly didn’t happen. I’ve contemplated this a lot recently. All of these things had to take place:

You could be mistaken for thinking that’s it, but there’s more:

So, in spite of my corns and all the rest of it, I kept walking. Two hundred yards down the road and across a duel-with-death carriageway, to be precise, and thank goodness I did because, just as I collapsed through the door of Bubbles Launderette, I came face to face with him: Henry. Henry — even his name sounds noble. He was dressed in a double-breasted, dogtooth blazer, complete with cravat and trilby, skin as rich and shining as my Welsh dresser. As he looked straight at me, I thanked God I’d bothered with the lipstick, despite the fact it’d cost me the first bus.

I felt like I should curtsey! Instead, I heard the words: “Well, they don’t make ‘em like you any more, do they?” And apparently, it was me who was saying it! He laughed and I felt my face flush. What on earth was I thinking? I’ve never been forward with a man in my life – but his manner, his honey-brown eyes, the subtle scent of, what – cocoa butter? Not to mention the movie star voice! What was a girl to do?

“I could say the same to you. Take a seat.” He gestured towards a hard-slatted bench, but it might have been a throne, given his grace. Slowly, I lowered myself onto it, as elegantly as I could and he nimbly sat down beside me, a respectable distance away. “Henry Hanson.” He offered a hand.

“Iris, Iris…” I took his hand and almost forgot my own surname, so new and shocking was his touch, “Brown.”

“Well, if I may say so, Iris, you don’t look like you belong here. What brings you to this soapy establishment?”

I giggled like a schoolgirl. “My washing machine’s broken down after nine years. Not like my old twin-tub, now that I had for a good 25.”

And that was how it all began.

The following Monday, he invited me to his ballroom class. I watched repeats of Strictly all day long in an attempt to pick up tips, but I needn’t have worried. Henry was a master, swooping me round that dance floor like a Flymo. I’ve never felt so light; it was glorious! Wednesday, we met for coffee and I learned he used to be a potter, “We’d make a great pair – my vases and your flowers!”

Friday was my birthday. The moment I opened the door to a pretty young lady with a smile on her face and an armful of freesias — well — is it too much to say I fell in love? No one had sent me flowers during the whole of my adult life until that day, all wrongly assuming I’d be sick of them. As a child, my mother gave me a basket of freesias for every birthday. There’d be a cake and a book or maybe a new dress, but for me, it was always those freesias. The bright colours and fresh, elusive scent that signalled it was my special day. I’d told him this and he’d remembered – this wonderful gentleman had taken the trouble to remember. For me!

People think there’s some mysterious art to finding true love. I read enough magazine articles and books on the subject. I learnt to love myself, that beauty comes from within and that I should exude confidence. On a practical note, almost every manual suggested joining a club. To be fair, I’ve always found bridge very stimulating, but it never led anywhere as far as romance is concerned.

Don’t get me wrong. I was attractive enough (still am, according to Henry) and I wasn’t one of those women who expected too much, either. I suppose no one really wants to think that the critical collision of meeting your life partner could be down to something as banal as a broken washing machine or a bus that won’t wait, but there it is.

Although, when the shooting star finally does come your way, you have to be ready for it, open to life’s sunny possibilities. Here I go…

This flower needs bringing into bloom quickly. It mightn’t last long, but it’s yours till the end.

That’s it from Iris. I’m sure you join me in wishing her well on her transformative journey. Next week, I will be bringing you an extract from Write On!’s very own Claire Buss’s brand-new novel, which came out earlier this month. I’m very much looking forward to sharing that with you, so I’ll see you then.

Lucy Kaufman is an award-winning playwright and author. Thirty-four of her plays have been performed around the UK and Australia, to critical acclaim. A person-centred/integrative therapist for 18 years, Lucy now writes full-time and teaches Playwriting and Screenwriting for Pen to Print. You can connect with Lucy on Twitter: @lucykaufman_ and on Facebook: https://www.facebook.com/LucyKaufmanAuthor