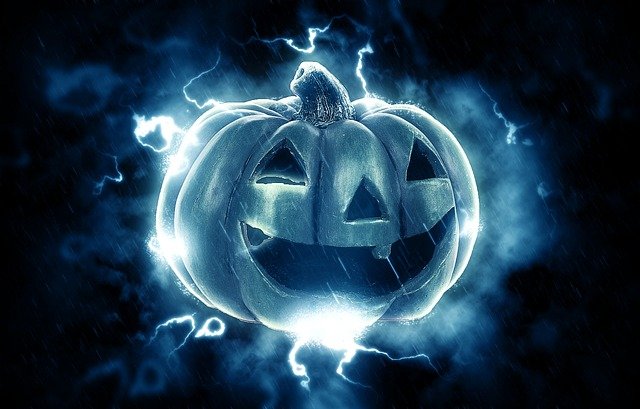 This week our theme is Crossing The Veil: Exploring our fascination with the supernatural.

October 31st is the Eve of the feast of All Saints (All Hallows in old-fashioned words so All Hallow’s Eve becomes Halloween), thinking about death, Heaven and Hell; and celebrating all the good people who went before us to Heaven – the Saints. The autumn feast also mixes in with traditions of autumn, the death of trees and plants and supernatural forces.

Deputy Editor Claire Buss shares some thoughts on the feast:

When you don’t believe in God, it can be very difficult to rationalise how you feel about ‘the after.’ I see the wisdom in believing in Heaven and Hell, in living a life a certain way to ensure you end up in one place or the other and I understand how that belief system can bring comfort. But I cannot take the leap required to ‘just believe.’ It has left me with a quandary. When my children were born, I was adamant that they be christened so their spirits, or souls if you prefer, would be looked after should they die in infancy. My beliefs are complicated. I am not a true atheist or calculating scientist who accepts the nothingness that awaits them. The thought of dying into the void terrifies me. Instead, I take comfort in ‘something.’ There is something more when you die. Whether it’s the release of your personal energy into the universe, back into the stars or whether it’s a continuation of consciousness surrounded by those loved ones you’ve lost along the way – I don’t know. But it’s those thoughts that keep me calm when faced with the reality of death and also open a fascination within me for All Hallows Eve, Samhain or Halloween, however you prefer to call it. The time of year when the veil between the living and the dead thins. The time of year when it’s acceptable to attempt to cross the veil, to speak with the dead, to honour your ancestors. It is certainly this fascination that has me an avid consumer of paranormal literature, TV shows and movies. The simple belief that there must be something more behind the curtain. In a way, I’m glad we don’t know for sure one way or another and that different people can believe different things, accepting and dealing with death in their own ways.

My poem Crossing The Veil sums it up:

It’s one night of the year
When the lines between life and death falter
If I can find you, I can keep you

Tears blur my vision
There’s a roaring in my ears
Times up, midnight has come and gone

One perfect moment of stillness
Before you are ripped away from me
And the veils is gone, till next year

Our traditional celebration of Halloween often includes witches and spells.  Writer Syd Moore shares this piece about witches with us.

Say witch and people will think of a bad-tempered old biddy with malevolent intent. But the bald fact of the matter is that most of those executed for witchcraft in England were just ordinary everyday folk who became the victims of scapegoating, neighbourly disputes or community bullying. Until she fell out with a neighbour who accused her, Ursula Kemp (Strange Magic) was the village healer, successful and respected.

Contrary to images in popular culture, most witches were not sentenced to burn to death. That was a crowd-pleaser used in Europe and Scotland. In England, plain old hanging was the most common form of execution.

This concoction of archaic sounding words has long been associated with witches, magicians and magic. Conventionally it’s uttered over a spell or when bringing about some sort of change. However, there are scholars who believe the term is derived from words spoken during the Catholic mass ‘Hoc est corpus”, ‘This is the body (of Christ).”

4. Talking to your cat could get you into trouble

Witchfinders were obsessed with discovering witch’s familiars. These were allegedly supernatural entities that would assist the accused in their practice. They often took the form of animals. If you were caught chatting to one, then you were probably a witch. Although poor and lonely Elizabeth Chandler of Huntingdon was thrown into jail for talking to a log and a stick.

A lot of people confuse the swimming test with the ducking stool. Witches were swum, scolds were ducked. Yes, the Seventeenth Century was a truly great time to be a woman! The swimming test usually involved tying the accused witch’s right thumb to her left big toe. If she floated, she was guilty for she had been rejected by water thought to be holy. If she sank (and probably drowned) then she would be innocent of witchcraft. What a consolation!

Google Seventeenth Century witch trials in England and you’ll see the women who pop up in the woodcuts and engravings are mostly depicted wearing close-fitting bonnets with the odd wide-brimmed hat thrown in. The only person shown wearing the now traditional black pointy hat was the Witchfinder General, Matthew Hopkins, the most monstrous of the lot. Is it possible that history has conflated him with his victims so that on Halloween, along with our green make-up and black cloaks atop our heads, we’re actually wearing his hat?

7. The Devil’s Mark – the witchfinder’s friend

Fed up with a neighbour? Have a love rival you need to dispose of? Just accuse her/him of witchcraft and state s/he has the Devil’s Mark. For the Devil’s Mark was handy catch-all proof that the accused was a witch. It was allegedly the teat through which the witch could suckle their familiars (see point 4). Unfortunately, because it was demonic it could masquerade as a spot or a birthmark, a blemish or a scar, a fleabite or a mole or, basically, any imperfection found on your body. Of course, if your body was flawless, you had nothing to fear…

8. To move to trial a confession was needed without torture being involved

However, the resourceful witchfinders devised methods of ‘encouraging’ the accused to confess. These included:
‘Watching’ – when the accused would be tied to a small stool with her hands behind her back and bound to her feet. This could go on for days and nights without pause or food/water/sleep/toilet breaks. If an animal or insect such as a mouse, bird, beetle, fly, wasp or flea entered the room at any point, this was also evidence that your familiar had come to visit.
‘Walking’ – like watching, but you’d be strapped to the shoulders of ‘able men’ and marched up and down till you confessed. Took days but reaped results.

9. The last person to be prosecuted under the Witchcraft Act was Helen Duncan

10. Witch Hunts are not a thing of the past

Unfortunately, the witch hunt still exists around the world today in Kenya, India, Saudi Arabia, South Africa, Papua New Guinea and many, many more countries. The brilliant Danish charity DINNoedhjaelp does a lot of work with the witch children of Nigeria. Do check them out. http://www.dinnoedhjaelp.dk/en/about-us/

All Syd’s books are available on Amazon.

Pumpkins have also become part of the celebration and we like to carve them, placing them on our doorsteps and windowsills. Claire Buss’ poem paints a picture of the adventure of carving pumpkins:

Una McGregor has been carving pumpkins too. She shares these pictures with us:

When I was a girl growing up in Ireland, we celebrated Halloween by dressing up (no shop-bought costumes for us) and putting on masks. We’d call on family and neighbours, who’d give us fruit and nuts; much more to do with harvest and autumn than sweets! We didn’t go to the doors of strangers or threaten to play tricks on them.

Back home, we’d have lots of fruit and nuts. And we’d have party games, usually with siblings and cousins: bobbing for apples, trying to eat an apple hanging from the door frame and a little fortune-telling game (that was as supernatural as we got), where you picked a saucer (blindfold) and if you got the coin (a sixpenny bit) it meant wealth, water meant you’d travel, and ash meant hard times ahead.

Now, when we talk about Halloween, people tend to say it’s an American import, but it was our tradition and is still a very big occasion in Ireland, where it’s a Bank Holiday.

Claire Buss is sharing another poem, this one about trick or treating, as it has become nowadays. Though COVID-19 will certainly change the celebrations this year:

Trick or Treat
The horde are walking down the street
They’ll knock on your door
Ask for more, more, more
And egg you on the way out

Trick or treat
Watch out where you put your feet
Sticky toffees, discarded gum balls
Some unfortunate kids complete haul
The pavement is littered with sugar

Trick or treat
I’m not moving my feet
You can bang on my door
But I’ve learnt how to ignore
Your crazed, sugar hungry demands

All Claire’s poems have been taken from her poetry book Spooky Little Book, book four in the Little Book Poetry Collection and available on Amazon.

Claire’s daughter, Anabelle aged two and three-quarters, drew a scary giant, and wanted to share it with ‘Mummy’s work” as did Pen to Print Alumni Juneha Chowdhury’s daughter, Zainab, aged nine, who drew a spooky ghost:

And finally, as things change and move on, we’ll be changing Write On! Extra. ‘Thoughtful Tuesday’ will become a monthly page, and I hope you will continue to read it. Look out for our print edition, which will be out tomorrow (28th October).

All Hallows Eve is when we are thinking about death, Heaven and Hell; and celebrating all the good people who went before us to Heaven - the Saints. The autumn feast also mixes in with traditions of autumn, the death of trees and plants and supernatural forces.