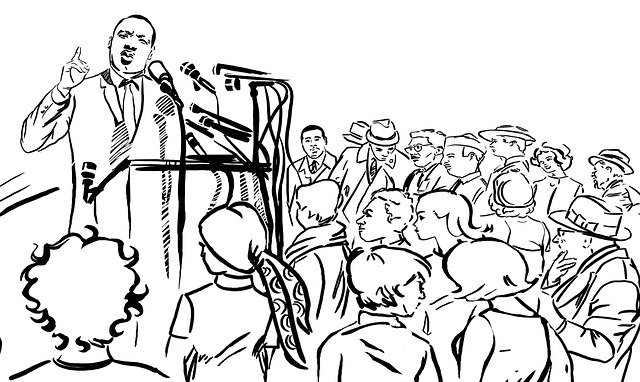 Refocusing On How We See Things During Black History Month

This week’s theme has a very close link to October, celebrating Black History Month. Conceived to challenge racism and educate everybody about British history not taught in school, it has been celebrated nationwide for more than 30 years – remembering all the people who have helped to shape our present.

Martin Luther King was a black leader who was pivotal in the Civil Rights movement in the USA. He’s probably most famous for the powerful rhetoric in his ‘I have a dream’ speech. I was surprised to find the speech is still held by the King family, under copyright.  You can find it on YouTube;

I’m sure you’ll love this picture which Emmanuel Oreyeni, our Write On! artist, has shared with us. 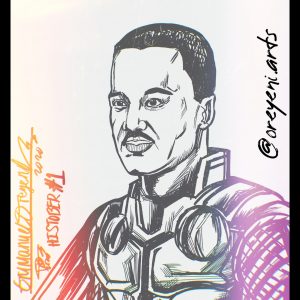 Pen to Print poet, Ann Dineen, has written a poem inspired by the words of the famous orator.

When we speak of freedom what do we say?
To pick and choose makes us deaf to the many.
Freedom turns to dust in our mouths unless we
speak for those languishing alone in dark corners.
Indifference will narrow our vision and blinded we
will stumble. Hold fast your neighbours proffered
hand. Why march upon uneven ground?  When
we can make straight the crooked path.

When will we speak of freedom that is satisfied?
The stock market bell rings out, call to arms for
tellers at the bank of injustice. When we pick the
locks on those vaults of opportunity we will find
sufficient funds.  No longer captive on an island
of poverty surrounded by an ocean of prosperity.
The turning tide will bring the riches of freedom
upon the breaking waves of justice

Write Next Door writer, Nina Simon, has shared her thoughts in this poem:

Life’s not a stagnant, still water
but an ever-restless, tidal sea.
Each action creates ripples
flowing down generational rivers.

We are who we are today
because of events, chance, accident, circumstance
always evolving, mutating surviving
but beneath surface changes
we are no different to the Masai in Kenya,
Eskimos in Northern Canada,
Indians in India, Chinese in Hong Kong
People in every continent are our distant cousins,
family linked by genetic code
all  humanity descended from mitochondrial Eve
who walked the wetlands of Southern Africa
200,000 years ago.

So why do we need to place labels round our necks,
place ourselves in confining boxes,
conveniently forgetting the truth of DNA?

Black history encompasses me as well as you

Here at Pen to Print we’re always happy to celebrate writers’ successes, including this news:

The Bookseller has announced that Publisher Nosy Crow has acquired Granny Came to England on the Empire Windrush written by our good friend Patrice Lawrence.

The book will be published in hardback and paperback in May 2022, to tie in with National Windrush Day in June 2022.

In Granny Came to England on the Empire Windrush, Granny is telling Ava about how she came to England on the ‘Windrush’ in 1948, built a life for herself and was determined to stay despite her homesickness. Granny also references other historical events and figures in the book such as Rosa Parks and Winifred Atwell, so that Ava can understand the scope and scale of her heritage.

Patrice says: “I am proud to write the book that I wish I’d owned as a child, especially when I was made to feel I didn’t belong in England. The struggles and achievements of the ‘Windrush’ generation must never be forgotten.”

Literary Agent Caroline Sheldon said: “This is a truly wonderful story of a journey that packs an enormous emotional punch and has a knock-out end that moved me to tears. I cannot wait to hold the physical book in my hands.”

Patrice published the YA novel, Orangeboy (Hodder Children’s, 2016), which won the Bookseller’s YA Book Prize and the Waterstones Prize for Older Children’s Fiction.

She was shortlisted for the Costa Children’s Award. She’s also written Diver’s Daughter a middle-grade novel inspired by the real-life African diver, Jacques Francis, who was hired to salvage the Mary Rose from Portsmouth Harbour in the 16th century.

Congratulations to Patrice Lawrence. We look forward to reading your book too! She has taken a moment from her busy schedule to share her thoughts with us:

“I was born in the UK and studied UK history assiduously to GCSE level. (Got an A and all!) I knew that my parents’ home countries were British colonies. I knew that people from Africa were enslaved by European countries but there my knowledge of black people’s history in the UK ended. I was in my 30s before I discovered Mary Seacole or that soldiers came from the Caribbean in World War 1 and are buried not far from my home town of Brighton. If we are all to have a sense of belonging, we need to understand our entwined histories, the good and the bad.”

The reason Patrice’s words mean so much to me links to  my own, personal – Irish – history.

When I was at primary school, my history was all based around the kings and queens of England, starting at William the Conqueror (a Frenchman, of course).  So, like Patrice, I have been delighted to learn about Mary Seacole and others who were not in the pages of my school books. The inference that everything came from Europe was a strong one. Only as an adult did I realise that the colonial nature of the European influence was not always a power for good.

Going on to study for A level history, I learned about ‘The Irish Question.’ Since then, I have come to realise that many people have no idea about Irish history.

Around the time of the Brexit vote, I saw TV journalists asking people in the street to show, on a map of Ireland, where the border is. They couldn’t, nor could they understand how the North of Ireland is part of the UK’s arguments about sovereignty and exit strategy. I also heard someone in the media complaining that the border between the Republic and the six counties had been created by Ireland and it was up to them to sort it out.

In 1995, Tony Blair acknowledged the role Britain had played in failing to alleviate the dreadful famine that hit Ireland, in the 1850s. While their crops were still being exported as cash crops for absentee landlords who owned the farms, the Irish farmers themselves had no food for their families. Blair publicly apologised for this state of affairs which prompted me to write this poem; it was, coincidentally the 50th anniversary of the liberation of Auschwitz.

1845-1995, Blair apologises for the British failure to help the Famine victims in Ireland.

1945-1995 fifty years since the liberation of Auschwitz (Oswiecim) prisoners.

Half a century since the Auschwitz liberation;
a hundred years after the famine of a nation:

Tenants worked the good earth for their rent,
their kitchen gardens failed, the rot set in.
Disease turned the crop to slime,
black rot and blight.

Hunger drove their hands to the mud,
clawing and scratching for its good crop.
Hedgerows could not sustain them,
their homes were repossessed.

Living in hides becoming one with the earth.

I see the newsreel of the liberated camps,
try to imagine what it must have been like
for liberating soldiers to see the hungry mouths and dark eyes,
bring them safe back to the world which failed them
not banish them to coffin ships.

Somehow, this year, with lots of talk about leadership and statesmanship, Churchill’s name cropped up in conversation. Divided opinions about his attitudes have been widely discussed, reminding us that there are two sides to every story.

David Cullen captures the shifting opinions about the Famous Prime minister with his cartoon. 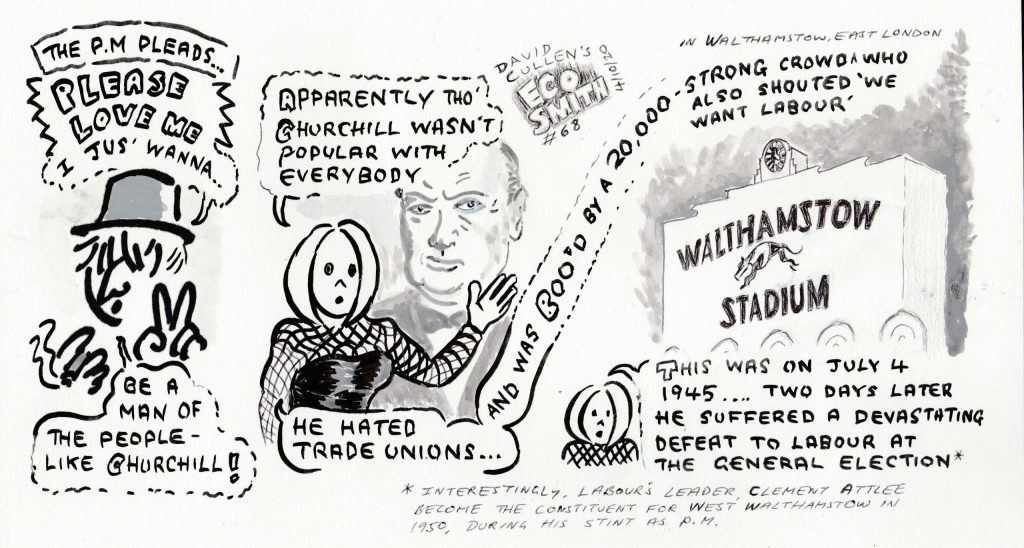 Pauline Cushnie has allowed us to share some of her portraits on previous pages and today, I’d like to finish with another this portrait of her mother, one I particularly like. When I asked her to tell me something about her mother and her family, she sent this lovely, personal history: 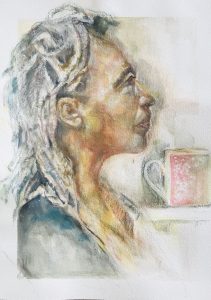 “My mum came to London in the early 1960s. My parents married in Jamaica and my dad came to London first; arriving by ship, a few days after Jamaica gained independence on 6 August 1962. Mum joined him a year later in the summer of 1963. She arrived by plane. They settled in Hackney: initially in Stoke Newington, before moving opposite Victoria Park, their first family home.

Mum’s first job was within the Jewish community. Work finished early on Fridays. My mother and two other young ladies were invited to the boss’s family home for the Friday meal which was a general family celebration dinner at the end of the week, in preparation for Saturday. My mum recalls a happy working environment where her boss treated them well. This was followed by working for the NHS as a nurse, a job that she continued until she retired.

A lady of many skills, she is a clever seamstress who made most of our co-ordinated clothes. She also has a vast knowledge of natural herbal remedies.

Dad was a carpenter by trade who taught in the local technology college as well as doing his ‘day job’. Skilled at technical drawing and furniture making he had a creative flair, inventing and executing many items for our home. He was also a wonderful colourist and photographer and, as children, we were encouraged to choose colours in the home.

I may be looking through the rose coloured lenses of the child’s eye but I clearly remember what he made and did. When he passed away, I acquired his toolbox and I still have it. The tools have ‘gone’ over the years, with some tradesmen wondering how and why a ‘young woman’ (girl to them) had tools like that.

Education and family life was very much at the top of my parents’ agenda and they provided a secure, nurturing environment for me and my siblings, helping us develop our skills and talents.

The wider community all knew places like Ridley Road Market which at the time was a source for cultural foods and products as well as being a general meeting point. At the time, Church and school life also provided a strong community network. We went to school with the local Catholic community, St. Dominic’s RC and Cardinal Pole, a predominantly Irish community and I am lucky enough to still have friends from this time.

I have often reworked the wonderful photographs my Dad (or Uncle who went on to America) took, to make my artwork. My vintage series was based around these images and other family memories from my childhood from the vantage of a child’s eyes.

The image Cherry with a pink cup’ is based on an image taken, by me, in a brief moment, as we gathered in the kitchen, evening time, after Christmas dinner, 2019.

I painted the picture for Mum’s birthday in March. Her birthday is always close to Mothers’ Day and this year, with lockdown, it is particularly significant.

And, finally; autumn marches on and we’re heading for Halloween. Whatever your views on this festival or feast and whether you celebrate it or not, we’ll be using our pages to explore many of the stories around Halloween. If you have something to send in, do remember to submit at pentoprint@lbbd.gov.uk

It's important to remember all the people who have helped to shape our present.