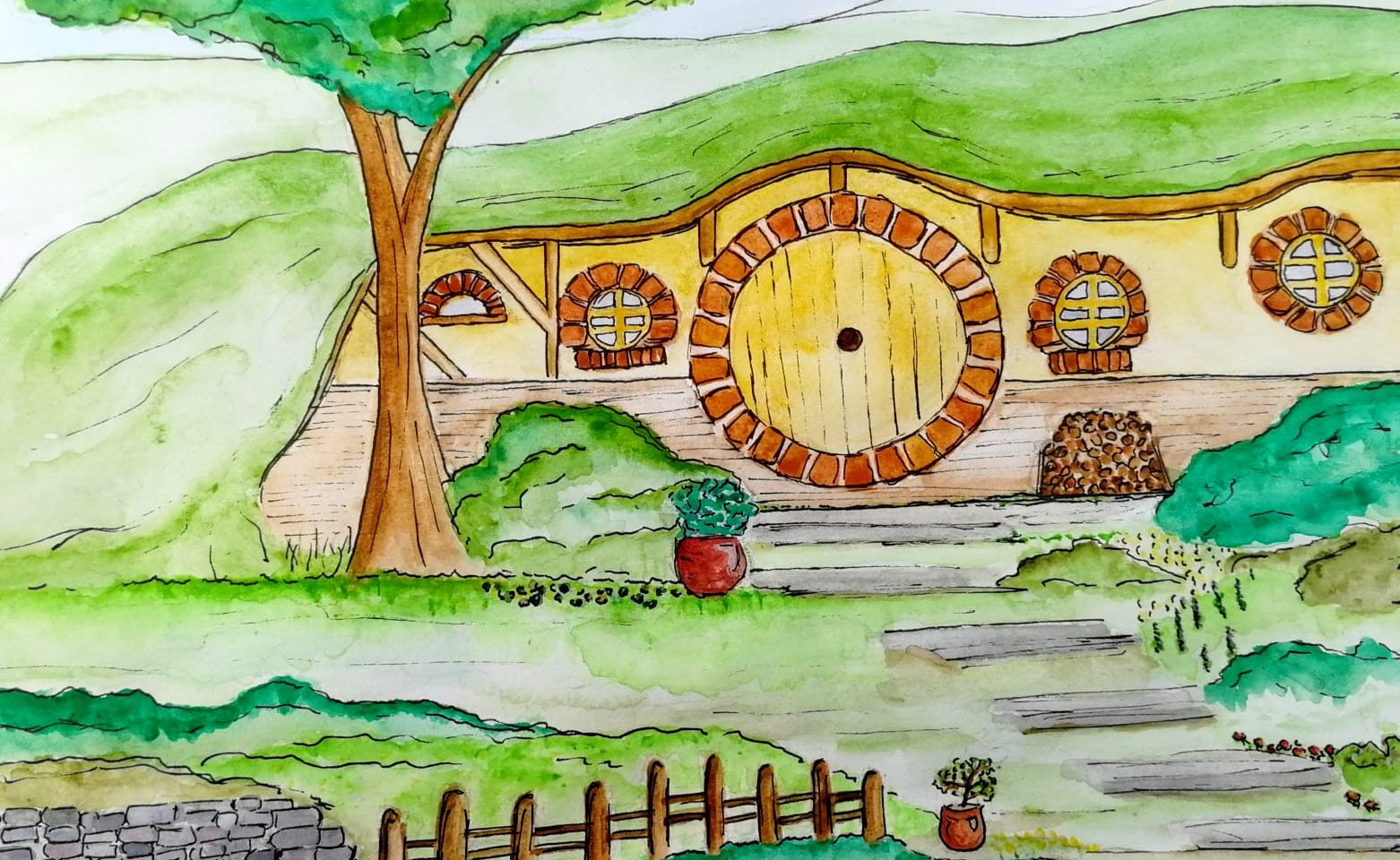 I thought I’d start today’s page on the theme of Upskilling, with a little advice.

The government is telling us to be alert. And I’m all for them telling us to be alert, as the old graffiti said: Britain needs lerts! All over the country, people are learning new skills, honing old ones and revisiting old hobbies. So I’m sharing some advice with you, which is similar to some I’ve been sent about getting absorbed in our pastimes and projects.

Some crafters have developed worrying symptoms, such as being unable to cook for their families or unable to get out of their seats to perform the most basic of household tasks. They’ve been spotted looking at the clock to know when it is going to be time to join in online and pick up the paints, the needles, the crochet hooks, trombones and gardening tools. It’s a new kind of anxiety. They never watched the office clock like this.

At odd times, you’ll hear them muttering strange indecipherable mutterings:  Slip, one, knit one, pass slipped stitch over, counting: Can’t talk, I’m counting stitches, or crying in despair for the loss of eyesight: I’m sure they could make needles with bigger eyes? and: I used to be able to thread a needle!

They’ll jump from their seats to Google all kinds of questions: How to wind a bobbin. My sweet potato plant is drooping; what should I do?  Can you thin oil paints with paintbrush cleaner? And there are many more.

Some are singing or play alone in what look like vain selfies projects; they hold the uke and tablet and hit the video button at the same time… careful of repetitive strain there, as you record again and again to get it right. Then, a genius sound engineer somewhere makes a lovely track from the uploaded snippets they send in.

You’ll also find some of these poor souls arranging their daily walks near wool shops or garden centres, like addicts looking for potential dealers.

There’s never any mention of these sufferers or their families on the daily briefings and scientists have not been alerted to add them to their research or statistics.

On the subject of Upskilling, I’ve been asking around about the new skills people have been learning in lockdown. There are some very clear themes in their responses. One of the strongest responses has come from the people who tell me they are not learning new skills but honing skills they already have. I salute them, too. Here’s a little snapshot of them all in the poem I’ve written:

Write a poem for the first time,
open mic from the kitchen table –
poem recorded in garden or shed.
Zoom and Teams for work and
leisure: Whatsapp and Houseparty, too.
New Mum learns to be a new mum…
finds out all there is to know
about feeding a child.
Parents teaching hard grammar,
sums that they don’t understand,
realise the teachers’ patience
spending hours with our little joys.
Learning facts from history podcasts,
quizzing in virtual pubs.
Making a new door from an old.
Someone’s learned the art of baking:
folding, beating, rubbing in.
Always remember Nanna’s motto:
light your gas and grease your tin…
wash your hands and then begin.
Here’s another master baker
making marzipan from scratch!
Get the paints down and remember
how the oils and canvas mix;
learning to draw with a pencil
and new styles for artistry, like
random sketches from requests.
Grayson Perry on the telly,
sending homemade birthday cards,
my friend’s mum is painting
a new watercolour every day.
Sewing scrubs for the NHS,
clapping for the front line workers,
checking in with all the neighbours,
taking different forest paths.

Some of us aren’t learning new skills
honing the ones we already have.
Some are teaching themselves
the lesson, hard to stick to,
making time to be, to just be,
still and calm till the lockdown ends.

I love it that there are so many references to creativity and art. I’d like to share some pictures with you: Nuala Clarke’s A Hobbit Hole and Some Black Birds Baked In A Pie and a picture of Brighton Pavilion by Liam McGregor,  which evokes the memory of pre-lockdown times. 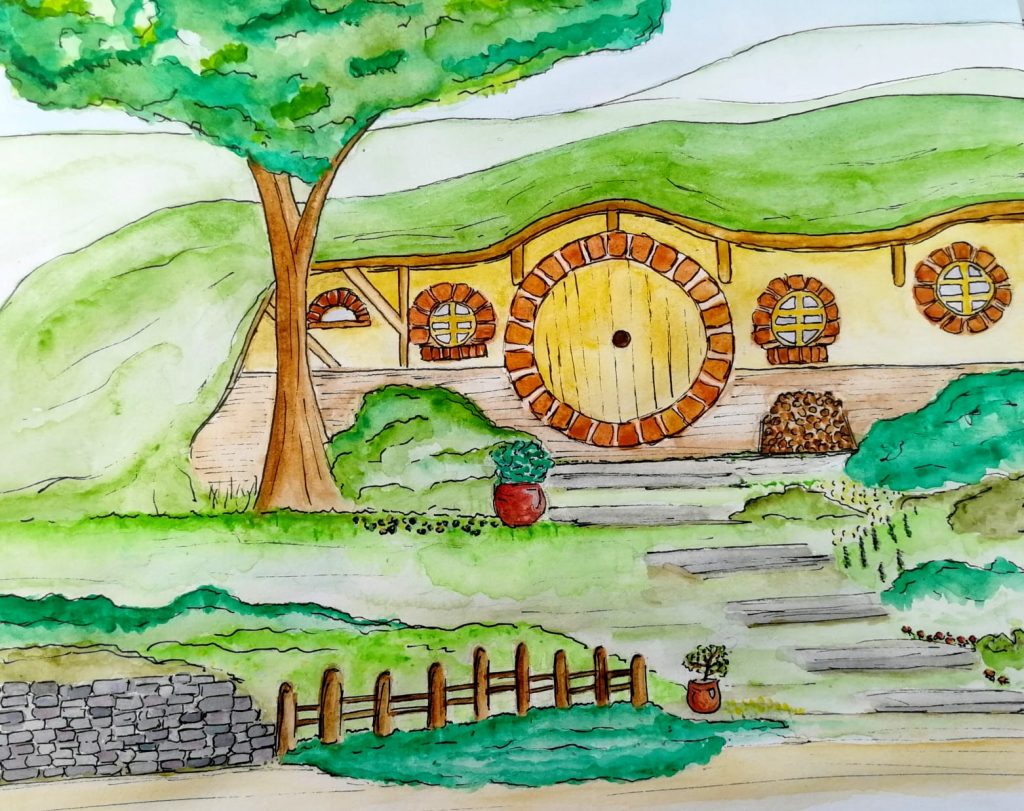 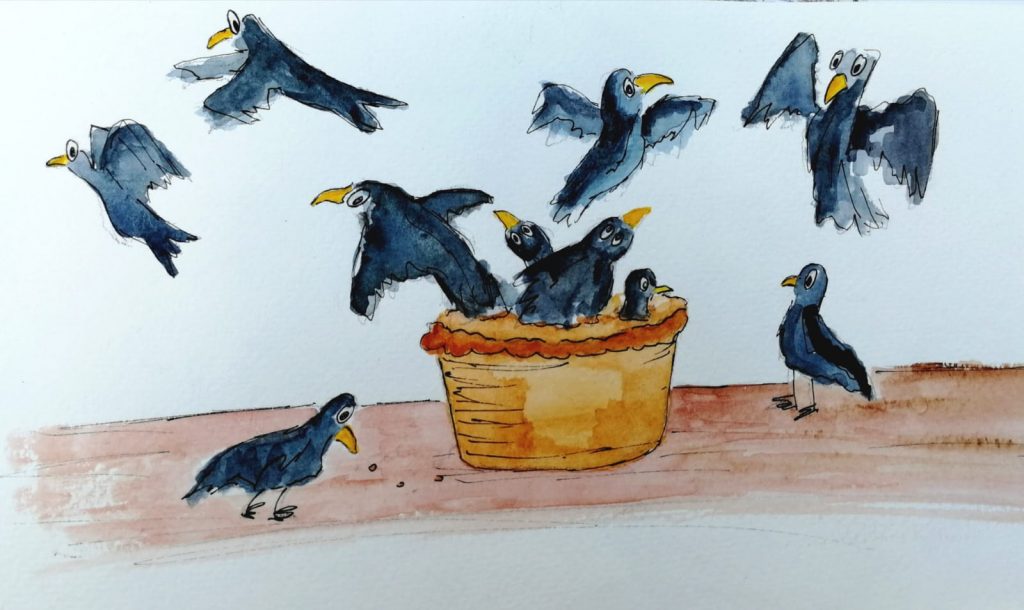 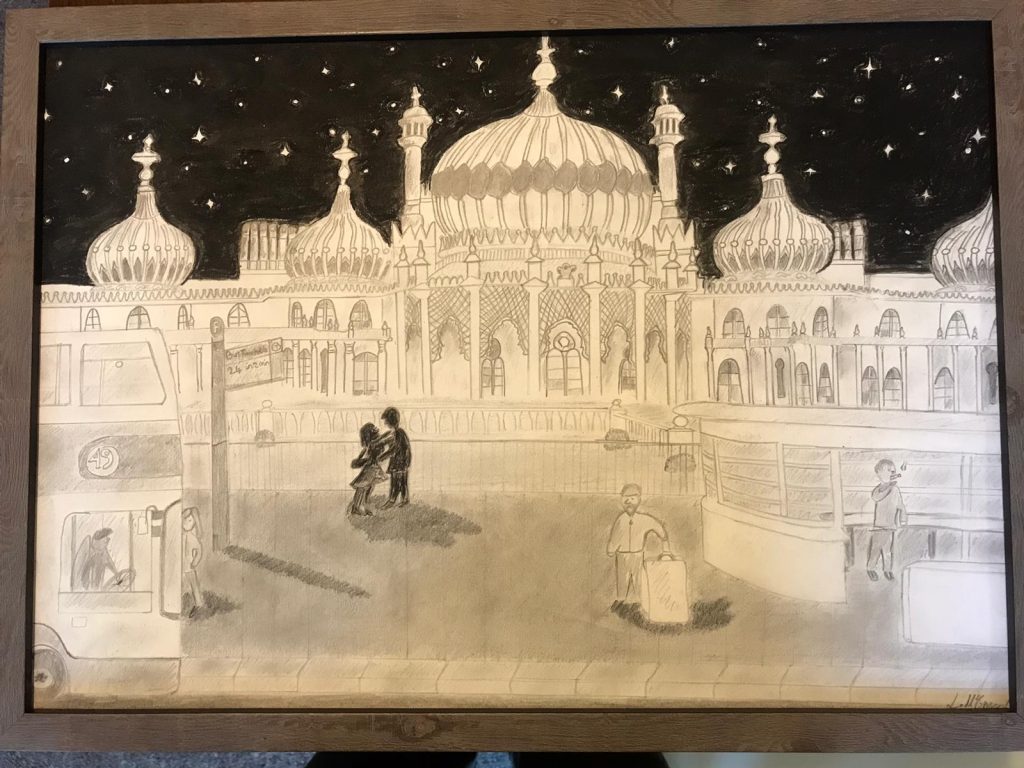 Pen to Print alumnus Michelle Sutton has been extending her creative shills in lockdown; she’s shared this hyper-lapse video of her drawing with us. I found it fascinating to see the way she drew this picture and how it developed in depth and detail as it grew. Thanks for sharing, Michelle

There are references to learning new skills all over the place. I’m sure if you look for How To… in your search engine, you’ll find courses (at discount prices) and broadcasts for all kinds of things. I even spotted that Martin on his Moneysaving page has collected some resources: click to access.

Pen to Print writer Patsy Middleton has shared this story with us. You’ll see there is a ‘skill’ element to this, which fits in well with our theme. I love the way a simple piece of coloured glass can evoke an entirely different time in history.

A Fragment Of Blue Glass

Filled with restlessness after a day’s boredom had beaten her mind into a foggy haze, Jane made her way to the abbey ruins. This was her favourite spot, a quiet place where she often went to think. A place she knew would calm and soothe her dark mood. Under the cloudless blue sky and warming sun, contentment grew.

As she wandered around the ruins, she saw something glinting between two large stones. She bent to let her fingers probe the cleft and pulled out a glass fragment, dull and half-covered in damp clay. Her thumb rubbed it clean. Bright blue emerged; a blue typical of stained glass.

Mist stole through the grass and over the stone slabs that had been the abbey’s foundation. As stones began to pile up on each other Jane stood transfixed, watching the building take shape before her.

A man appeared, walking through the opaque air, a long metal tube in his hand.

Jane thought she should be afraid, but his expression was gentle, his strong frame moving with purposeful strides.

Jane’s hand moved out to him. “Who are you?” she asked.

“Where have you come from?”

“I come from a thousand and five hundred years ago. when this patch of land was bare of any building. I will explain,” he said and began to tell Jane his story.

“The word went out; they were hiring artisans to work in Barking, where they wanted to build an abbey.

There wasn’t much call for glassblowers in Cumberland, so I got together with others – my family and the Samsons and the men we worked with – what a rag-tag lot we were!

It took us over a month to get to our destination. Worth it, though; they wanted us to make the stained glass for the windows in the abbey. My, but it took years to build. And our windows were the last things to go into it. We had Jasper with us, too. It was he who painted the glass and fitted it into lead to make the pictures.

We never did get home, though. A plague swept through the workers and most of us died. They buried us in the grounds.

Then, a thousand years later, they pulled the abbey down. All our hard labour gone to naught. Can you wonder at us not being able to rest in our graves?”

“So you haunt this place, do you, Joseph?” Jane asked, still wondering why she was not afraid of this ghost.

“Lord, bless you, girl, no, not as a rule. But you picked up a bit of the glass that made up the virgin’s mantle. I had to come and see who was disturbing it.”

“Oh, I’m sorry, Joseph. I didn’t realise I was disturbing it,” Jane said, and leant down to put it back where she had found it.

“No, child, you may keep it as a remembrance of the place that was and tell others of my tale.”

The figure turned and retreated into the mist, which slowly receded and disappeared.

Jane was left gazing at where Joseph had stood. Then she looked at her watch – time to get back to her office. She took a deep breath and turned to go.

On her way, she thought of how she always liked the atmosphere of the abbey ruins and now she knew how special a place it was.

As she thought about Joseph and the Abbey, she knew there wouldn’t be many people she could tell of her experience. They would think she was making it up.

Some of us will be experiencing lots of stay-at-home time for a good long while, and will be able to continue upskilling and being creative.

Two little mentions for the poem about upskilling: Barry Clarke used his creative flair to make a new door from an old one… and here it is: 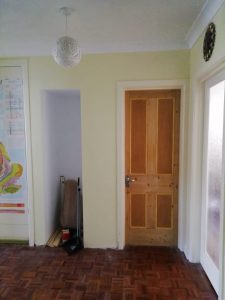 And I mentioned getting down the paints to complete my picture of West Quaddy Lighthouse, Maine USA. 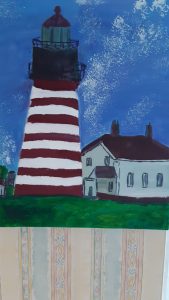 If you’ve been upskilling with your creative writing, don’t forget to send in plays, poems, short stories and book chapters to our Pen to Print competitions or send your submissions for Write On! via the website.

Next week, we’ll be sharing thoughts and ideas on Senses Of Nature.

Issue 4 of Write On! magazine is available now online. Click to read your copy.

All over the country, people are learning new skills, honing old ones and revisiting old hobbies.