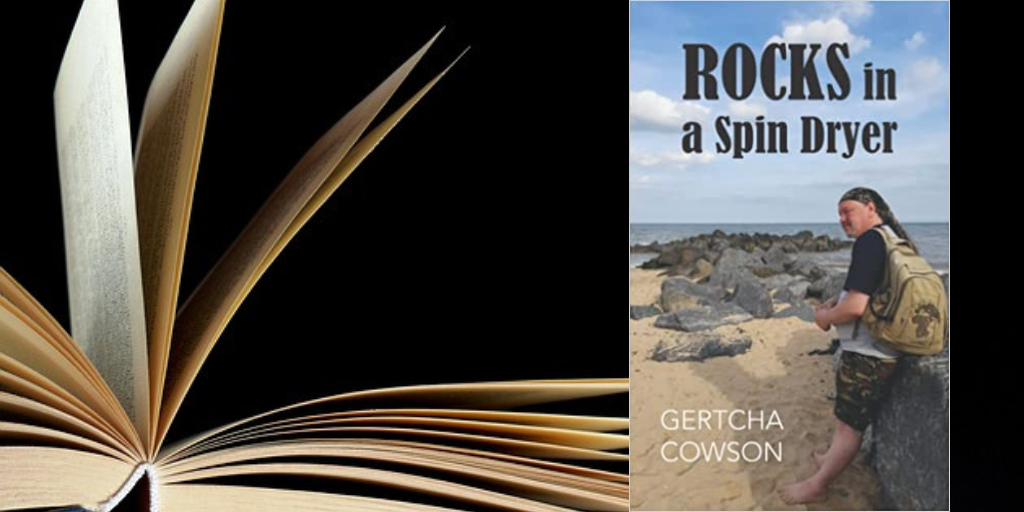 I first encountered Gertcha’s writing a couple of years ago, in the form of some early pages from his book, Rocks In A Spin Dryer. As soon as I began reading, the feeling I had when I saw a mountain for the first time burst upon me. ‘Speechless’, ‘In awe’, ‘Astounded’ – none of these cliched responses came close. Language, you see, has its limitations. It can only ever approximate. And sometimes, as with when I first saw a mountain, or read Gertcha, language fails completely. Writing is about finding the right words and putting them in the right order. That’s all it is. Gertcha’s words are words of courage, they are words of love, they are words of joy. Most of all, Gertcha’s words are his words.

The way Gertcha writes cannot be taught and it cannot be learnt.

It simply is. Please, enjoy.

The Birth Of Bipolar Boy!

January 1972. It was an ordinary cold, wet and wintery day in Forest Gate, East London. For most people, it was a day to forget.

Little did they know the significance of that day, for a new life entered the world: a new life with superpowers that few could comprehend!

Bipolar Boy can flip his mood faster than a speeding bullet! His bipolar mind powers give him the sense that he is both incredibly invincible and incredibly vulnerable all at the same time!

Yes! Bipolar Boy has the powers of camouflage, where he can hide in any populated room and you wouldn’t know he was ever there. Bipolar Boy will use his superpower of confusion to anyone who makes the mistake of asking him: “What’s wrong with you, anyway?”

Bipolar Boy will drown out all confusing noises in his head by relying on his superpowers of alcohol-fuelled hepatic regeneration.

Yes! Bipolar Boy, as his alter-ego Gertcha Cowson, will address the public in poetry, prose, philosophy and stories in the hope of teaching love, peace and understanding, while having a little laugh along the path of life.

We all have pieces of furniture in our minds. Like wardrobes, chests of drawers, cupboards, etc. it’s where we store pieces of info. The problem Gertcha has always had, ever since he was an ankle biter, was that he could never remember where he put the darn info.

Gertcha has spent most of his life thinking this was normal for everyone until he learned about aphasia. Acknowledging this means he can work with and/or around it and, of course, it goes without saying:

“ALL HAIL THE THESAURUS!”

I want to say something
special to MeKathy

But one of my Bipolar
symptoms is struggling
to find the words I need.

It’s not that I forget the words
It’s just I cannot remember
where I put the bleedin’ things!

Words about how her beauty
blinds and bedazzles me as it
smacks me square in the face!

I struggle to find a way to express
the way her voice sings in a melody
of sweet, sweet harmonic honey!

My mind goes blank
as I try to explain
the beauty of her cheek
bones that rise and fall
as she smiles or laughs
at my silly remarks!

Or the way her hair curves
and knits and curls into
a beautiful weave!

That goes on and on
into a never ending
network of speckled hair
crowning her head in a way
that utterly mesmerises me!

I despair as I try to think
of the words to elucidate
the way the shape
of her curves and form
dance like a ballet dancer
floating on air
although she is simply
just walking past me!

Or the beauty I look at
as she stands there pursing
her lips and shaking her
head as I say something daft!

Words to translate my feelings
about how she makes my heart
beat a million beats a minute
every time I kiss her lips!

The verbs to decipher the way
my legs give way when we hug
each other in a loving embrace!

Or delineate how her dark skin
is like a delightful rare black rose
that is glistening under the sun!

The somniferous of her snoring
sounds pulchritudinous to my ears
that lures me into a loving sleep!

Sometimes I know the words
I want to use but the wrong
word pops up and I cannot
think past the wrong word!

And it stops me using the words
to describe how the profile of her
face is like a beguiling piece of art!

It stops me expounding
about the butterflies
rippling and flittering
in my stomach as she
makes me a cup of tea!

The shape of her ear with its auriform
splendour and its pretty magnificence!

Gertcha has always had rhythm and rhymes bouncing around his bonce, but there was some sort of mental block until he was a little over 40, stopping him from taking advantage of it. The noises in his head were at their loudest back then, especially earworms and crazy ideas. So, in the hope that he could quieten them, he started writing these ideas and rhymes down. Eventually, this started to form into poems, and he hasn’t looked back since.

That noise he was suffering and is still suffering with, is what he refers to as “The Rocks In A Spin Dryer”-  if you can imagine the cacophony that would produce. Again, he grew up with that constant noise and spent most of his life thinking it was normal, which is why, when writing, he has to have the telly/radio on in the background so he can focus, because the noisiest place for him would be standing in the middle of a large field, left alone with his own head!

After he’d compiled quite a few pieces of work, he started thinking about how to share them. Of course, that sounds easy, but when you’re the Jack of all trades and master of some – when it comes to mental health issues – trust me, it’s not.

The first time he read some of his work at an open mic, he read Let Them Children Play; probably the first poem he finished writing. It normally takes between three and a half and five and a half minutes to read, but Gertcha is sure he did it in about 30 seconds. However, the more he read at open mics, the better it got, which goes to prove what he always says:

Let imagination be wild,
Let a child be a child,
Let them kick a ball about,
Let them scream and let them shout.

Let their hair be short or long,
Let them sing their own song,
Let forever children know of peace,
Whether son, daughter, nephew or niece.

Let the children have their fun,
Don’t ruin it by giving them knife or gun,
Let them children develop a skill,
That does not involve how to kill.

It’s hard for Gertcha to pin down his influences. He would have to say he can hear the voices of artists Benjamin Zephaniah and Mutabaruka in some of his work, but he can also hear snippets of Michael Rosen, Dylan Thomas, Maya Angelou, Brian Bilston, and many more. This is how Gertcha believes influences work: your mind soaks up the fantastic works of your favourites and they become influential, albeit subconsciously. Someone once referred to Gertcha as a poet for all seasons, although he feels a bit conceited calling himself this.

Smell the coming rain
Petrichor flows in my veins
I feel immortal.

Gertcha is currently working on a follow-up to Rocks In A Spin Dryer, which will probably be called Scribbles From An Old-Fashioned Modern Poet. It will still have poems and haiku, but also acrostics and a short story, or maybe two, with a series of works called Window #. He is also working on a book of Cockney poems and wisdoms.

And what window shall I look out today?

Today’s window is not there!

Today’s window was blown away!

Today’s window is now in a million
little shards of non-existence!

Through the hole where the window
use to be is a pile of  rubble and craters
where shelter, dreams and hopes
once stood strong and sturdy!

Smoke and dust still bellow around
the murdered bodies of flesh and bones
that lay there in their final poses!

Bodies of all shapes, sizes and ages!

Outside the village border a few miles away
are the perpetrators of this evil stinking madness
all following the orders of a wannabe demigod!

A wannabe who cowers from their own generals
refusing to listen about their murderous crimes
caring only for their pride, ego and their greed!

As a result they have no care for the murdered
masses dead on their direct order and they
definitely have no love for the likes of anyone
else including me; nor thee!

Hand is quite tired
The pen weighs heavily now
My thoughts need some rest.

I hope you have enjoyed this selection of Gertcha’s work. Gertcha has asked me to point out he is also known as: The 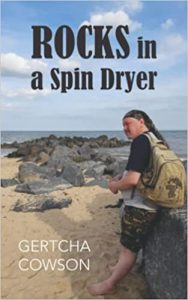 Disabled Poet, The Raggedy Poet and the What The Bleedin’ ‘Eck Is He Wearing Now? Poet. (Close up here.) To me, he is an incredibly talented one-off poet!

Issue 14 of Write On! Magazine is out now. See it here.