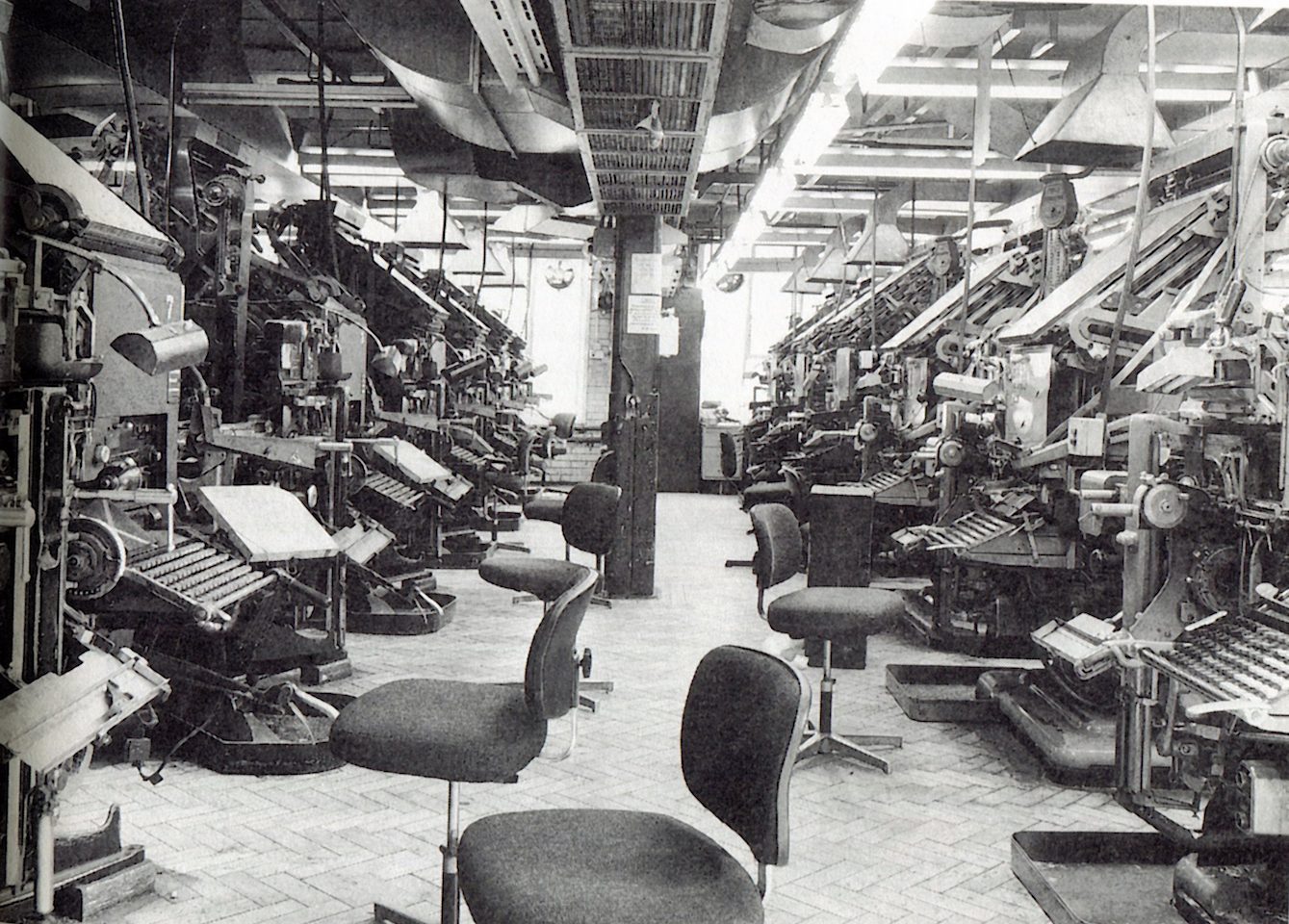 Printing and publishing have come a long way in the past 50 years. We have Rupert Murdoch to thank, if thank is the right word, for revolutionising the way newspapers are printed. Today, the printed word goes from computer to printing press without touching paper. Everything is carried out in cyberspace. Prior to Murdoch, printing hadn’t advanced a great deal from William Caxton (who didn’t invent the printing press, but that’s another story!). Newspapers and most magazines were still printed by letterpress using 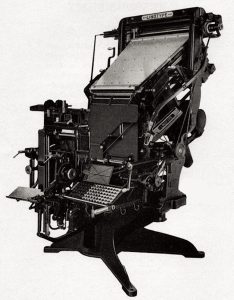 metal type in some form.

I started my working life in advertising and was able to enjoy the occasional study visits to block makers, printers, and sometimes newspapers. On one occasion, I visited The Daily Herald, which was printed by Odhams Press, then located in Long Acre, close to Covent Garden Market. There is now a commemorative plaque on the wall of the new building that occupies the site. When I first saw that plaque, I felt like a dinosaur. Covent Garden Market in my young days was a thriving fruit and vegetable market, packed solid with lorries unloading and reloading fruit, vegetables and flowers, through which I often walked.

The Daily Herald was then the official newspaper of the Labour party, but like most Socialist newspapers, it went broke and the name was changed to The Sun. It was still a broadsheet paper at that time and tried to appeal to a female readership, but it failed yet again and was eventually bought by Rupert Murdoch who turned it into the headline-screaming, titillating tabloid we know today. He knew what the public really wanted!

The preparation, printing and distribution of newspapers was incredibly labour-intensive at that time. The logistics and timing of the whole operation were mind-boggling. It was also rigidly controlled by trade unions, wielding enormous power over newspaper proprietors. The visit I made to The Daily Herald to see it being printed started early in the evening, when news was being collated for the next day’s edition. It was an autumn evening in 1954. 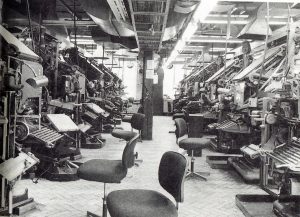 We first saw the newspaper being ‘made-up’, which consisted of strips of paper, each being a column of print, that were cut and pasted using scissors and glue. These column strips of type had been set on linotype machines. A linotype machine looks like a naked grand piano standing on end with a typewriter keyboard instead of keys. There were two rows of these machines, each with its own pot of hot lead from which the machine cast its own type in solid, single lines – hence the name: Linotype. Each machine was controlled by a man who sat at a keyboard copying a manuscript he had received from a journalist in the newsroom. When he had typed a row of type, the matrixes of the letters would be lifted automatically to the side of the machine, where they would be cast in lead into a single line of type from the pot of molten lead mounted on the side of the machine. The small brass matrixes, from which each letter had been cast, would then be lifted by a mechanical arm to the top of the machine, where they would be sorted by gravity into their correct position, ready for use again. The whole operation was open to the eye, quite noisy, and fascinating to watch. The typing speed of these men was incredible. Normally, only female secretaries knew how to type in those days, so it was quite extraordinary to see middle-aged men dressed in working overalls being masters of a typewriter keyboard. There were two rows of around a dozen such machines, so you can imagine the noise they made!

The lines of typecast in the linotype machines were collected and placed in a metal frame, each the size of a newspaper page, called a ‘chase’, together with the ‘blocks’ for the pictures and the printing plates for advertisements, which the advertising agency had

supplied, the order and position having been provided from the make-up, cut and paste operation. This collection of thousands of pieces of lead constituted a whole newspaper page, in reverse. These frames of type were then tightened with wedges called ‘quoins‘ and the whole thing became a solid mass of metal, called a ‘forme‘, which was then passed to the matrix machine. A large sheet of thick, wet, floppy paper was placed over the forme and the whole thing placed under tremendous pressure and heat. When it came out of the press, minutes later, the thick wet paper had become a flat, rigid matrix of the forme, from which several lead printing plates could be cast.

The purpose of the matrix was to be able to make several duplicates of the original forme, but instead of being cast flat, these duplicates were cast as half-round plates  (‘stereos’), that would be fitted onto the drums of the printing presses. Dozens of plates would be cast for each page. Some would be used at the printing works in London, and others would be put onto trains bound for Manchester or Glasgow, for the northern editions. These curved stereos had to be trimmed to the correct thickness and mounted in the printing press. The whole process was an incredibly skilled job, requiring exact precision and carried out by dozens of men working as a team. It was like watching a heavy-duty ballet being performed. Each operation was carried out by a man who belonged to a printing union, and each operation was strictly limited to that one person. It was known as demarcation of labour. While this work of mounting the stereos on the machines was being carried out, and the presses were being made ready to roll at 11 pm, our study group retired to the pub for refreshments. The process of making up the presses was called ‘putting the paper to bed’ and it had to be completed by 11 pm, when the presses would start rolling. By then, trains would already be speeding north carrying the stereos to be mounted on presses in Manchester and Glasgow for the northern and Scottish editions.

When we returned from the pub, work in the machine room was almost completed. This time, we entered the building through a side door at street level, finding ourselves standing on one of the newspaper presses; one of ten that stood in two rows down the length of an immense hall, whose floor was actually one storey below ground level, while the ceiling reached to the top of first-floor level. This massive machine hall, though in the basement, took up the space that would normally be occupied by two floors. Each press was nearly as high as a house and we were standing on a steel mesh platform on one of them, looking down at the machine room floor several metres below and onto the rollers of the machine under our feet. The ‘newsprint’ (huge rolls of paper) had been threaded through the presses and the stereos had been mounted on the rollers. The ink had been primed and everything was ready. There was little activity and the hall was relatively quiet; all that could be heard was the sound of a few machine operators walking around and talking quietly. It was like a cathedral waiting for the organ to start playing. At 11 pm sharp, a klaxon horn sounded, which gave the signal for everyone to stand clear of the presses and rollers. The hall went silent. Somebody called, “All clear!” then somebody else pressed a button.

Few experiences in my life have been as exhilarating as the next few minutes. Everyone knows you can start an electric motor with a switch. Bigger motors require bigger switches, or relays, which increase the power in stages as the machine gathers momentum. A printing press the size of a house, with a thin sheet of paper carefully threaded through a dozen rollers, takes time to gather momentum. It also takes very big motors and a great deal of power.

The silence was suddenly broken by a series of thumps, as electrical starter relays thudded into place. Hundreds of rollers and machine parts throughout the entire machine room simultaneously started to move, very slowly. At first, there was just a gentle rumble as the rollers moved and the paper fed its way through the machine. The speed slowly increased. More relays thudded into place, like a car changing gear, as momentum and machine speed increased. As the minutes passed, the final relays fell into place and the machines were given full power – and still the speed increased. By this time, the noise was intense. The newsprint was now moving so fast, you couldn’t focus on it, and still the machines accelerated. It must have taken several more minutes before full speed was achieved and the noise, which was now totally deafening, reached its climax. The metal platform on which we stood, which was part of one of these infernal monsters, was shaking so fast that it was like walking on ice. It was spellbinding. I could have stayed in that noise, speed and excitement forever, but we had to leave before we suffered permanent ear damage. Our guide had achieved the desired result: we were impressed. Boy, were we impressed! It had been like sitting on the nose cone of a Boeing 747 at take-off.

Those presses would run for the next five hours or so. As the newspapers were printed, they were fed by conveyor belts to the packing room to be bundled into quires of 24 papers and loaded into a fleet of vans that sped out in all directions throughout the night. The first editions would be delivered to the mainline railway stations for transportation to all parts of the south of England. They would be collected by shop keepers, who sorted them ready for delivery by school children earning pocket money and would be on breakfast tables before seven am the next day. Throughout the night, the newspaper would be updated and the first edition might differ a great deal from the final edition, which would be printed around five am for delivery to Londoners’ breakfast tables.

Similar printing rooms were running in Manchester and Glasgow, to take care of the Midlands and the North. And this was just one, and a relatively small one, of the London-based, National Dailies that were printed in millions every night of the week. I realised I was part of an exciting business. No other country had this national newspaper system. In all other countries, newspapers were relatively local. However, the smallness of Britain and the extensive railway network made it possible for newspapers to be printed in three centres and be distributed over the entire country within a matter of hours. Nowadays, of course, computer and tele-technology simplify the entire process, but in the 1950s, if you wanted to print the same newspaper in two cities, you had to cast a lead stereo and send it by steam train. Considering the difficulties, printing and distributing a total of something like 15 million national morning newspapers every day of the year, was, and still is, an incredible feat of logistical organisation. Today, a journalist can write a story, for it to appear on a customer’s computer on the other side of the world minutes later. Where is the romance in THAT?!

You can connect with Vic here: vic.howard@telia.com

Our guide had achieved the desired result: we were impressed. Boy, were we impressed! It had been like sitting on the nose cone of a Boeing 747 at take-off...