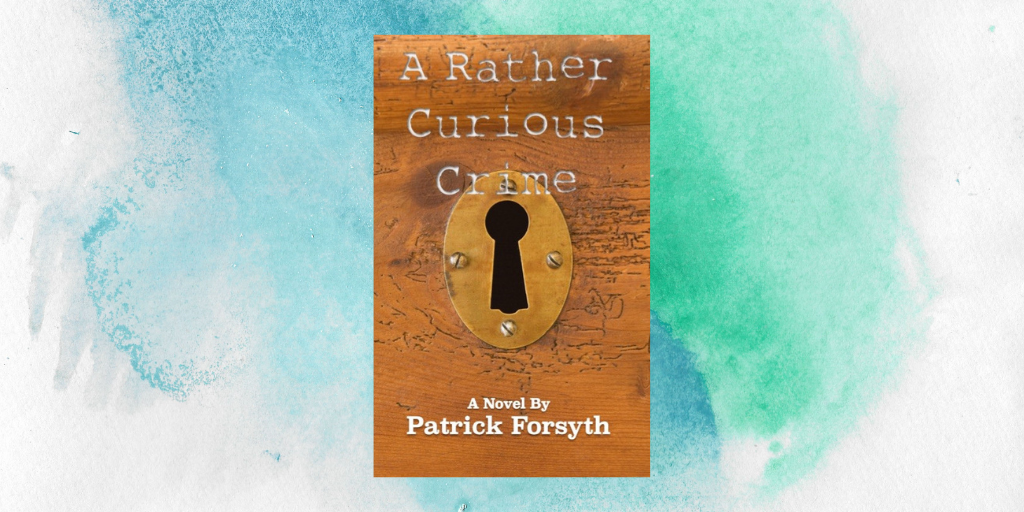 I know quoting Chinese proverbs is something of a cliché, but how about this as something to ponder currently: the Chinese write the word ‘Crisis’ with two characters. Singly the first means ‘chaos’ and the second means ‘opportunity’. Hmm.

I predominantly write non-fiction, including travel writing, humorous books and a wealth of material for business, including how-to advice on personal work skills, ranging from negotiation to management. But I have just had a novel published: A Rather Curious Crime. It revolves around a much put-upon new reporter on a local newspaper crossing paths with someone planning a crime in the town. Things prove to be rather different from how they initially appear.

With the germ of an idea and half an A4 page of notes, I got writing in early March, at the very start of lockdown. The idea filled out, the manuscript took shape and, after a good deal of editing of the first draft, I felt it was done. I sent it to the publisher of a previous book, got immediate acceptance and the book was published in October.

This sounds pretty good, even to me, and you are right to wonder how this was possible. Reflecting on doing this, I know I learnt a great deal during the process. I am not a great believer in writers’ block (who was it who said the cure for writers’ block is… a mortgage?), but I am as likely to procrastinate as any other writer. Surely no group has sharper pencils or spends more time gazing out of the window and calling it work!

This was at the start of the coronavirus crisis lockdown. Many of my regular activities being curtailed meant I had time on my hands, which I wanted to fill pleasantly and, if possible, constructively. So I resolved to approach the writing very systematically:

Of course, there were distractions, but the more I progressed, the easier it became to resist them. The story and characters carried me along and I found myself regularly writing for longer than planned because  ‘I just have to finish this bit’. Finally, I had a manuscript I was happy with. I was fortunate that, having had books published before, I had a publisher to go to. This was a small press, but as I get older, I am less inclined to take on lengthy exploratory pitches. Having written, I want to get the result out there, even with a company whose marketing is not as great as some.

Of course, lockdown meant that distractions were less than usual, though procrastination was as beguiling as ever. I found the work structure I created fed my motivation and, frankly, kept me sane in a time of very little human contact. After all, this is a process all writers are used to: BOSHOK – Bum on seat, hands on keyboard. It’s always a solitary activity and it takes a while.

Now, with the project over (though lots to do to promote the book), I feel I learnt a good deal and I think there are lessons here that every writer should heed. I am reminded of once hearing crime writer Ian Rankin being interviewed. He was asked how he managed to produce a book every year. He explained  (I paraphrase) that, even if he only wrote a page a day, he would still have a book in a year. Of course, there is more to it than that: fiction needs ideas, non-fiction needs a clear structure working out, but just getting the words down can be done, if you make a plan and stick to it. How long it takes is another matter. Lockdown is one thing; more usually, most of us cannot write for as many hours as we perhaps wish, but a conviction to stick with your chosen plan pays dividends and, this surprised me – doing so got easier. As I found it was working, as I made progress and the system become a habit, I was more inclined to stick to it. The process becomes one of improving motivation.

To an extent, in terms of time, there is again more to such a project: you have proofs to read, a cover and blurb to think about and possibly queries from a nit-picking editor. Though be warned: it’s amazing what you can let slip through. And not just typos. In an earlier story I was only prevented from having someone send a text message before text messages existed by a sharp-eyed editor! Some rapid re-writing turned it into leaving a message on a telephone answering machine.

The keyword here is persistence. There is an old saying that there is one word that should be used to describe a writer with no persistence and it’s… unpublished! This certainly applies to the task of seeking out publishing opportunities, but it very much applies to the BOSHOK stage too. I used to think I was pretty systematic and well organised (for goodness’ sake, my bestselling book is called Successful Time Management [Kogan Page]!), but I now know I can do better; not in burning the midnight oil and putting in more hours, but just by making a sensible commitment and (largely) sticking to it.

Of course, writing presents difficulties: of language, of description, plot, character and more – it’s rightly called a creative process. Who was it who said: ‘A writer is someone who finds writing more difficult than other people?’ It’s a comment we would likely all identify with, I’m sure. 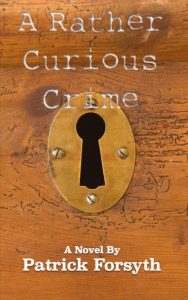 But I found that a systematic approach makes it possible and helps get it done that much more easily and quickly. Now, I hope people will like A Rather Curious Crime. Time will tell. If you want to find out for yourself and are interested in obtaining a copy, do contact me at: patrick@touchstone28.com.

Patrick Forsyth has had more than a hundred books published and, as was said above, his new novel A Rather Curious Crime was published recently. He is an enthusiast for the writing process, writing and talking about what it involves in many ways. He is the current Chair of Brentwood Writers’ Circle, an eclectic group of about 50 writers from around the Brentwood area.

I know quoting Chinese proverbs is something of a cliché, but how about this as something to ponder currently: the Chinese write the word ‘Crisis’ with two characters. Singly the first means ‘chaos’ and the second means ‘opportunity’. Hmm.