A Child’s Journey Through Poetry, Vol. 2 by Sabinah Adewole 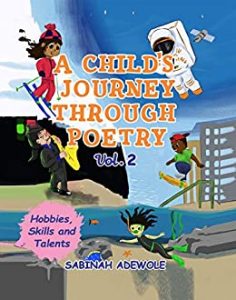 Covering themes of employment, skills, talents and hobbies, this book is ideal for any young person looking into the world of work.

Mostly created in the United Kingdom, the poems were inspired by people the author met on her journeys. Whether by train, bus or any other mode of public transport, these conversations form the heart of this book.

Fun and easy to read, with colourful pictures that will appeal to readers of all ages, this series will encourage and educate children to embrace the moment. 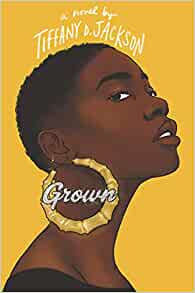 When legendary R&B artist Korey Fields spots Enchanted Jones at an audition, her dreams of being a famous singer take flight.

Until Enchanted wakes up with blood on her hands and zero memory of the previous night. Who killed Korey Fields?

Before there was a dead body, Enchanted’s dreams had turned into a nightmare. Because behind Korey’s charm and star power was a controlling dark side. Now he’s dead, the police are at the door, and all signs point to Enchanted.

How We Got To Today by Ben Ellis 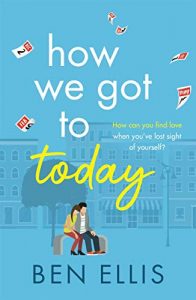 How can you find love, when you’ve lost sight of yourself?

Sheridan doesn’t know what he looks like. There’s nothing wrong with his vision, it’s just that he’s the only person in the world who can’t see his own face.

Despite this, he has it all going for him – a good job as an optometrist, a nice home, and a wonderful girlfriend. All until Heidi, totally out of the blue, dumps him.

And to make matters worse, not only has she broken his heart, but she’s disappeared. Distraught, Sheridan begins to search for her, and ends up finding himself along the way. . .

This is a story about how sometimes it’s the people closest to us that see us the best and, if we lose sight of ourselves, can tell us who we really are. 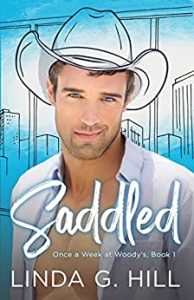 There’s a new assistant in Sandra’s office. And he’s messing with her concentration.

The no-dating policy at the Studletter Condom Company isn’t a problem for Sandra until Michael walks in, all good looks and bulging biceps. Maybe they can just be friends…

Eager to quit moonlighting as a stripper, Michael, aka Saddle McFleshbomb, buckles up to learn the ins and outs of his new career. Only it’s harder than he expected when he meets Sandra, a stunning beauty with a laugh that heats him to the bone.

When Sandra turns up at Woody’s Pub and catches him in the act of disrobing onstage for a room full of men, Michael sees his solution: maintain the pretence that he’s gay, so they can ‘date’ without defying the office romance policy. But the clock is ticking on his fib. And it’s sure to bite him in the scantily-clad behind.

If you like low-angst romantic comedy, hot office flirtations, and a long slow burn, you’ll love Saddled, the first book in Linda G. Hill’s Once A Week At Woody’s series. 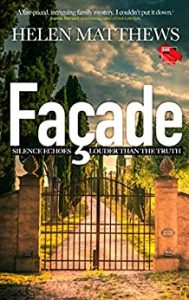 When seventeen-year-old Rachel’s baby brother drowns and her older sister, Imogen, escapes to live abroad with Simon, her musician boyfriend, Rachel must face the family’s grief and disintegration alone.

Twenty years later, Rachel is a successful businesswoman, with a daughter of her own, supporting her parents and their elegant Georgian home, The Old Rectory, that shackles them to the past.

Simon’s sudden death in Ibiza brings Imogen back, impoverished and resentful. Her family owes her, and she will stop at nothing to reclaim what she believes is rightly hers.

The rift between the sisters seems permanent. While Imogen has lived a nomadic life, filled with intrigue, in Spain and Tunisia, Rachel’s has appeared stable and successful but, behind the veneer, cracks are appearing. Now, she is vulnerable.

As the wall of silence and secrecy crumbles, danger stalks Rachel’s family. She must re-examine her baby brother’s death, find out what happened in Tunisia, and fight to hold onto everything she’s achieved –or risk losing it all.

Façade is a gripping tale of loss, guilt and danger.

Crossings And Encounters: Race, Gender And Sexuality In The Atlantic World by Laura R. Prieto and Stephen R. Berry

For centuries the Atlantic world has been a site of encounter and exchange, a rich point of transit where one could remake one’s identity, or find it transformed.

Through this interdisciplinary collection of essays, Laura R. Prieto and Stephen R. Berry offer vivid new accounts of how individuals remapped race, gender and sexuality through their lived experience and in the cultural imagination. Crossings And Encounters is the first single volume to address these three intersecting categories across the Atlantic world and beyond the colonial period.

The Atlantic world offered novel possibilities to and exposed vulnerabilities of many kinds of people, from travellers to urban dwellers, native Americans to refugees. European colonial officials tried to regulate relationships and impose rigid ideologies of gender, while perceived distinctions of culture, religion and ethnicity gradually calcified into modern concepts of race.

Amid the instabilities of colonial settlement and slave societies, people formed cross-racial sexual relationships, marriages, families and households. These not only afforded some women and men with opportunities to achieve stability; they also furnished ways to redefine one’s status.

Crossings And Encounters spans broadly from early contact zones in the seventeenth-century Americas to the postcolonial present, and it covers the full range of the Atlantic world, including the Caribbean, North America and Latin America. The essays examine the historical intersections between race and gender to illuminate the fluid identities and the dynamic communities of the Atlantic world.

The Silent Conspiracy by L.C. Shaw 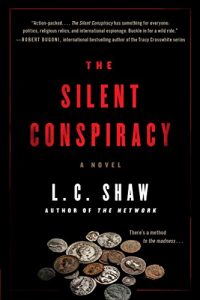 The past is about to catch up to Jack Logan and Taylor Parks in this gripping follow-up to The Network.

It’s been almost two years since investigative reporter Jack Logan and television producer Taylor Parks brought down the Institute—the secret facility responsible for indoctrinating a generation of America’s political and media power players. Their lives are just getting back to normal, and Jack and Taylor have settled into married life with their young son, Evan.

But soon a series of bizarre, seemingly random murder/suicides captures Jack’s attention as a disturbing pattern emerges. Could someone be intentionally causing people to become homicidal? At the same time, Taylor is producing a story about a class action suit against a national insurance company that has reached the Supreme Court.

As Jack and Taylor start to suspect their stories are connected, they realise there is something far more insidious at play that could not only directly threaten them, but the very future of the country…